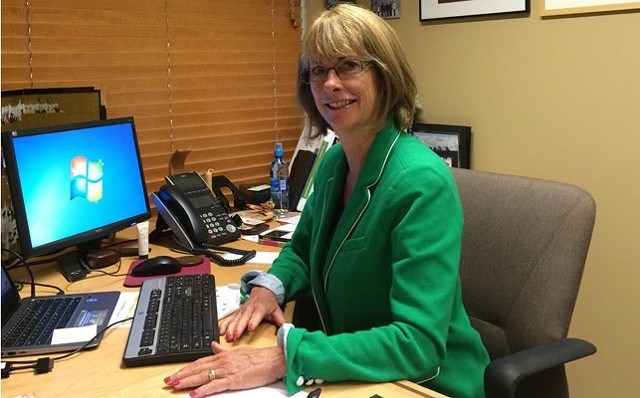 Mayor Nancy Wilhelm-Morden never thought she'd be paying US$18 for a single joint, but that's the going rate for some pre-rolled "Blue Cheese" bud.

Her visit to LEAF in Aspen was a personal shopping excursion while on the recent four-day council fact-finding trip to the Rocky Mountain state.

"I wasn't interested in smoking it," she laughed, of her solo visit to the store. "I just wanted to see what the inside of a shop looked like."

It was nicely-appointed, she said, and very weird - to step into a legal dispensary in Aspen, and have her choice of marijuana - in grams, in joints, in edibles - all of it locally sourced down the road in Rifle, all of it legal.

Her joint came in a canister, much like a cigar canister, complete with a filter.

"This is a substance that here in British Columbia if you are in possession of it, let alone purchasing it, you could be faced with criminal charges," said the mayor. "So, yes, it was definitely odd."

But timely, given that Prime Minister Designate Justin Trudeau has promised to legalize marijuana for recreational use. There is no timeline for that legalization; the new government will first need to figure out how to tax and regulate it.

"Talking with people, both elected officials in Colorado and just people on the street, it's been a complete non-event, except for this revenue bonanza," said the mayor.

Colorado's legalization of marijuana is predicted to add about $100 million in tax revenues to state coffers.

That was not the impetus for the trip; rather, it was about gathering information and best practices from the competition. All seven members of council attended, along with municipal staff. In total, there were 13 Whistler representatives.

The council trip covered four main ski resort towns in relatively close proximity - Aspen, Vail, Snowmass and Breckenridge. All were quite markedly different from one another, said the mayor.

For more on this story pick up Pique on Thursday.