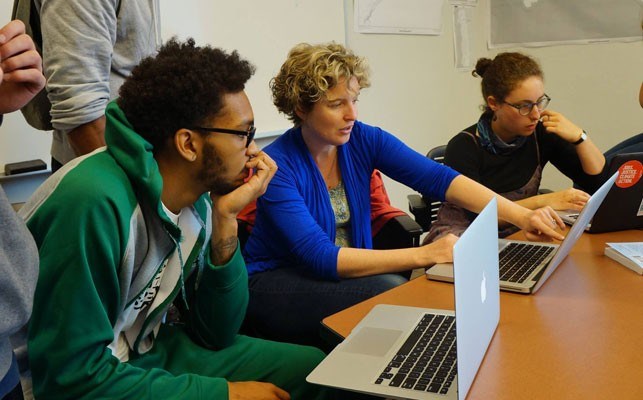 WHY DO YOU VOTE? Students at Quest University are running a video campaign to encourage young people to vote. Check out their Facebook page at I Vote B/C youth film contest. Photo submitted

The mayor made the announcement on her Facebook page shortly after advance polls opened in Whistler on Oct. 9.

"Probably most mayors want to appear neutral but I've never been shy and this election is too important. I'm voting Liberal," the mayor wrote.

"Pam Goldsmith-Jones is the best candidate in this riding in my opinion and federally the Liberals have the best chance of forming government. Although their platforms have many good things in them, a vote for the Greens or NDP in our riding is a vote for Harper."

In a follow-up interview, Wilhelm-Morden said she decided to go public with her choice after being continually asked whom she'd be voting for.

"To the extent that my support may have some influence on some people, I thought it was important to voice publicly whom it is that I would support," she said.

"She has provided, in my opinion, very good leadership as the mayor of West Vancouver over the years," she added.

"She's a very hard worker, she's got integrity, and she does what she says she's going to do, so I've got complete confidence in her as a candidate."

Advance polls opened over the Thanksgiving long weekend, with reports of long lines and extended wait times across the country.

Over the first three days of advance voting, Elections Canada estimates 2.4 million people cast a ballot — a 16-per-cent increase over the 2,077,000 advance ballots cast over three days in 2011.

The fourth day of advance voting — new to this year's election — drew another 1.2 million voters, bringing the four-day, advance poll total to 3.6 million — a 71-per-cent increase over the number of advance voters in 2011.

The early increase in voter turnout can be attributed in part to the bevy of awareness campaigns that have been ongoing in the lead up to election day.

At Quest University, students in a Canadian Political Strategy class have taken it on themselves to try and reach out to young voters.

The students started the "I Vote B/C" video contest to encourage youth to get the word out about why they're voting.

"When the videos are shared around, then that can hopefully inspire other people to vote and get engaged politically in other ways," said Talia Martz-Oberlander, one of the students behind the project.

"I really feel like the takeaway is to talk about the issues that matter to you. Is it tuition fees? Is it healthcare? Do you have a senior in your life that doesn't have proper benefits? Are you worried about your chance to get a job?

"Whatever matters to you, find those issues. They don't have to be political, but oftentimes there is reflections in the political system, in the policy and really, each and every one of us that lives in this country is affected by our government in one way or another — we just have to open our eyes and think about it."

Submissions for the video contest won't be accepted past today (Oct. 15), but you can get involved by watching, liking and sharing the videos. Check out the group's Facebook page for more — I Vote B/C: - Youth Film Contest.

To vote, you must be 18 years or older on election day.

You must be registered to vote. To register, go to www.elections.ca, or register in person before you vote on Election Day.

Once registered, do not allow anyone to offer you false information or otherwise dissuade you from voting.

If you receive information you believe to be intentionally misleading or malicious, file a complaint with Elections Canada as soon as possible.

When you get to the polling station you'll be asked to prove your identity and residential address.

There are three options to do so before voting.

1: Show your driver's licence, provincial ID card or any other government card with your photo, name and current address.

2: Show two other pieces of ID, one of which must have your current address (a complete list of accepted forms of ID can be found at www.elections.ca.)

3: If your ID does not have your current address, you can show two pieces of ID with your name, and take an oath in the presence of someone who can vouch for your address.

You are legally entitled to take three consecutive hours away from work to vote.