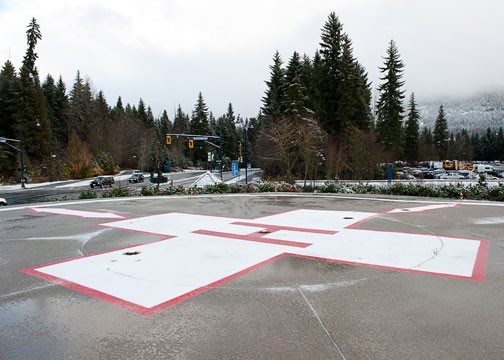 This isn't going to be a very merry Christmas for any one who needs to get to the Whistler Health Care Centre in a hurry by helicopter.

Helicopters won't be landing at the Whistler Health Centre helipad this holiday season because Transport Canada couldn't issue an operating certificate following an inspection on Thursday (Dec. 15) of the upgraded landing pad.

According to Brent Alley, the Executive Director of Capital Projects with Vancouver Coastal Health (VCH), a key part of the snow removal system on the helipad is incomplete.

"The glycol loop to the heating boilers, there's a missing piece, which is a manifold that has to be customer made and that particular piece isn't made yet," said Alley.

The makers of the manifold that is required to get the heating system operational are working to expedite the creation of the part, he added.

"We acknowledge that this project has been difficult and we are doing everything we can to get it up and running because we certainly know how important it is to Whistler to have this functional so in the interim we'll continue to use the municipal heliport," Alley said. "We're cognizant that that's a solution not as ideal as we'd like."

Alley pointed out that the changes have come about due to Transport Canada changing its standards to make the regulations more stringent at heliports.

In addition to the incomplete snow melting system at the helipad a set of lower traffic poles haven't arrived yet.

The lower poles demanded by Transport Canada are less of a concern because VCH has a work-around for the pole issue. Once the snow melting system is built the pole issue will be addressed through the use of VCH security staff members who will stop all traffic in the area of the helipad when helicopters are expected.

The shorter poles are being manufactured now, said Alley, and they will be ready by mid-January.

Through the inspection Alley said VCH learned that a few other minor issues also need to be addressed.

"The snow that was piled up close to the pad was too high and we've got to find a different way of clearing the snow from the area to make sure it doesn't impact access to the pad," Alley said.

There is also an operational manual that needs updating.

Since the start of the winter season at Whistler Blackcomb, the heliport has been used at least six times to transport an injured person by helicopter. Blackcomb Aviation tracks the occurrences and a representative of the company said the number of times patients have been transferred at the heliport could be as high as ten between Nov. 18 and Dec. 14.