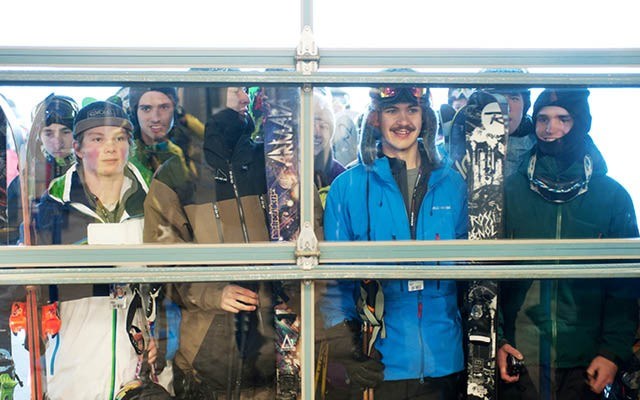 Cooper Bathgate waited 25 hours at the base of the Creekside Gondola to be the first to board the lift and kick off the winter season at Whistler Mountain's south side. He set up camp at 7:30 a.m. on Friday, Nov. 15.

"It was really cold and really long," said Bathgate, just seconds before the 15-year-old got on the gondola at about 8:15 a.m. on Saturday.

A crush of eager snow sliders swamped the lift attendants after they announced loading could begin. Minor chaos followed as the crowd jockeyed for position to get into the next available car.

Whistler Blackcomb's VP of Operations, Bob Dufour, saw from a distance that a higher level of order was needed so he jumped in to help the frontline workers get the energetic crowd better organized.

A few minutes before the Creekside Gondola started loading a similar scenario played out at the Village Gondola.

"I think this is the only ski area in the world where people will camp out the night before to ski some limited terrain but that's how eager they are," said Dufour after the initial chaos at Creekside eased. "At the Creekside you've got the old regulars. It's good to see."

Stuart Rempel, WB's senior vice president of marketing and sales, said the 60cm snow base and sunshine on opening day meant those on the mountain for the early opening day found great conditions.

"I was at all of our lift bases and talked to lots of guests and people were really excited," said Rempel.

"We've heard comments that it was one of the best openings we've ever had."

On Sunday it snowed all day but that didn't stop WB customers from getting up the mountain, said Rempel. He noted that some people ventured into the backcountry to enjoy the snow beyond the ski area boundary.

"It is important to obey mountain signage, ski and ride on open runs only and stay within the operational area marked by "Temporary Boundary" signage. Guests should be aware there will be rocks and other hazards below the snow surface; we do not recommend skiing and riding outside the temporary boundary in any circumstances."

The official opening day for Whistler and Blackcomb is Thursday, Nov. 28, the American Thanksgiving weekend.