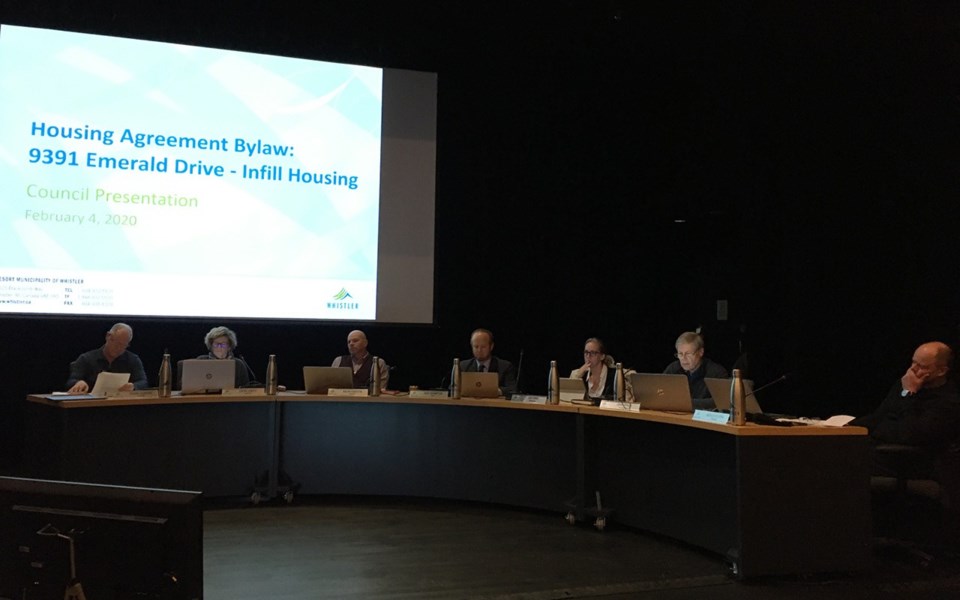 AT THE TABLE Whistler council hears a presentation at its Feb. 4 meeting. Photo by Braden Dupuis

A new building intended to house staff of the Whistler Mountain Ski Club (WMSC) is moving ahead after council gave a related rezoning first two readings at its Feb. 4 meeting.

The four-unit building (two three-bedroom and two two-bedroom units) to be constructed next to the existing WMSC club house at 2028 Rob Boyd Way will also include common storage, laundry and parking.

While intended to house seasonal ski club staff first and foremost, it will also be able to house other employees as necessary.

Resort Municipality of Whistler staff is proposing a maximum rent of $1,200 per bedroom.

The rezoning would effectively remove the property from the existing Commercial Core Two zoning it shares with other Creekside Village properties and replace it with a new site specific zone (Leisure Recreation Eleven).

Amendments introduced by Councillor Duane Jackson and supported by council directed staff to slightly increase the allowable gross floor area (to the equivalent of .25 floor space ratio) and to vary the setback to include covered walkways.

Jackson's concern in looking at the designs was that there's not much extra room to account for storage, and the project's upcoming appearance at the municipal Advisory Design Panel could halt its progress.

"If it goes to design panel and the design panel says, 'gee, I think it needs a bit more balance and more living space for people to live, and more dining space and kitchen space or storage space,' and the applicant finds that, 'Gee, we can't achieve that, we have to go back for more area,' we'll be looking at this again," Jackson said.

"So I'm not saying they have to do it—they are fine to allocate whatever they can afford, or phase it—I'm just saying we should give it a bit more runway."

The project is one of seven rezoning proposals received from private developers following an initiative from the Mayor's Task Force on Resident Housing.

Meanwhile, a subdivision application seeking to provide infill housing on Emerald Drive was also back before council on Feb. 4.

The plan is to build a new employee-restricted detached dwelling on the new parcel of land, with potential for an auxiliary dwelling unit as well.

"This proposal provides employee housing by a private property owner in an existing neighbourhood, without detracting from the character of Emerald, to increase the inventory of employee housing, at no cost to our community," said planner Stephanie Johnson, in a presentation to council.

A housing agreement bylaw setting out occupancy and price restrictions was required prior to a development variance permit being issued, which brought the application back in front of council.

The housing agreement bylaw—which received first three readings at the meeting—sets the initial maximum rent at $2.90 per square foot (or $1,000 per bedroom for a shared living arrangement) and restricts occupancy to Whistler Housing Authority-eligible employees.

Should the bylaw be adopted, the housing agreement would be registered on title by a covenant (a separate covenant restricting building envelopes to the forward portion of the properties, as well as preserving tree preservation zones, would also be added).

"By registering the housing agreement on title, full disclosure would be made to any future purchaser about the employee occupancy requirements, the rental rates, and retail price appreciation restrictions," Johnson said.

Council last deliberated the proposal on Feb. 26, 2019, approving a development permit application for the project provided one of the lots is kept for employee housing (see Pique, March 1, 2019: "Whistler council gets philosophical on housing").