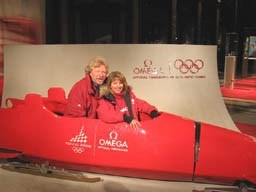 The Whistler Mountain Ski Club may be one of Canada’s best bets to produce future Olympians.

"It wouldn’t surprise me at all if we have a number of Whistler Mountain Ski Club athletes on the Canadian team for the 2010 Olympics," said club president Tony Holler, whose four sons are all or have been ski club competitors.

"People are going to start to realize the quality of skier that we put out from this club."

Mike Janyk and Manuel Osborne-Paradis, both club alums, are at the Torino 2006 Winter Olympic Games in Italy.

Osborne-Paradis was a respectable 13th in the downhill and 20 th in the Super-G. Janyk will race the slalom on Saturday. Right now he is ranked 22 nd in the world in that discipline.

Holler expects Osborne-Paradis, Janyk and others will be in their prime when 2010 rolls around.

Though it had humble beginnings the WMSC now consistently provides up to 50 per cent of the B.C. Alpine Ski Team and up to five members on the national team, which averages about 19 competitors.

Kids join when they are 11 or older and train and race in age-related groupings. As they grow older they will start to train Thursday through Sunday, to compete and follow their dream.

Just glance at the "Wall of Fame" inside the ample two-story clubhouse nestled in Creekside just a stone’s throw away from the bottom of the Dave Murray Downhill – the site of the alpine events for the 2010 Winter Olympic Games.

Janyk’s confident smile beams back from his team picture as does Osborne-Paradis’. A host of others are there too.

Then there is Rob Boyd — a Canadian hero who won the World Cup Downhill in 1989 in his hometown of Whistler, sending the resort into hysterics of happiness. Indeed his win was the catalyst to the $700,00 fundraising effort that produced today’s clubhouse, replacing the portable the rambunctious skiers gathered in, which was slapped up against the town’s original church.

Boyd coached for the club until 2004 when he joined the national ski organization, Alpine Canada Alpin, to help Canadian female skiers reach for the podium.

Part of the key to the WMSC’s success is its desire to support and help every kid who skis, not just the ones who win.

"Obviously part of our mandate is getting people on the podium there is no question about that," said Holler, adding that it takes scores of parents to volunteer at every level to keep up the club’s successful track record.

"But we have a much bigger mandate than that. Equally important is that all the other kids who go through our program turn out as awesome skiers and awesome individuals."

As program director Nigel Cooper put it: "It is not easy or convenient to be a ski racer."

Racers miss many school days so they have to be self-motivated to get their schoolwork done while they train. Even as youngsters they have to look after themselves and their gear when they travel to races, and they have to be committed to hours of fitness training on and off the slopes if they want to truly have a chance at success.

Whistler Mountain Ski Club has a gym in the building and, said Cooper, it’s made clear to the kids that fitness is key.

"We have strict requisites in terms of fitness," he said. "We have a gym in the building and run dryland sessions five to nine times a week whether it’s weights, aerobics or flexibility training."

And then there is the mental and psychological coaching every athlete gets. In Whistler, unlike many other clubs, training is a year-round commitment.

The community also supports the club. Whistler Secondary offers a unique educational program that allows students to pursue activities inside school hours while still being able to get their work done on time. That’s a big draw for families whose kids are hoping to carve out a place on the national team through the WMSC.

For the last 13 years the WMSC has also put on the Whistler Cup, an international ski race for youths aged 11 to 14. Last year 300 racers came from 20 countries to compete.

The trophies displayed in the clubhouse are like a who’s who of alpine celebrities, some of whom got their first big wins at the event.

"Over the last 13 years the Whistler Cup has grown to be huge," said Cooper.

"That event is cool because it is not just a ski racing event, it is a little bit like an Olympiad because you are bringing people together for all sorts of neat reasons such as experiencing different languages, and culture, as well as taking part in the sport."

In many ways the success of the Whistler Cup mirrors why the club itself is so successful. It is run by dedicated volunteer parents, past and present, a year-round committed coaching staff and administrative support, and it is hosted and supported by Whistler-Blackcomb on the best ski mountain in North America.

Steve Podborski, a bronze medallist at the 1980 Winter Olympics and still the only non-European male to win a World Cup overall title, believes the Whistler Cup is vital to preparing kids to compete internationally.

"It can prepare (the kids) to actually represent Canada on the international stage," said Podborski a director of the WMSC, and a father of two racers now with the club.

The dream of reaching the top has pushed 2006 Olympian Janyk to his very limits.

At age 13 he broke his leg twice within six months.

"I came back from that and I was not the best in the ski club for the next three/four years," he said from Italy where he was training for the Games.

"But all I would think about back then was making the national team or making the Olympics and how that was an incredible experience."

There is no doubt that Janyk’s love of skiing, strong coaching, and family support placed him in the top 25 in the World Cup rankings. But asked about what the Whistler Mountain Ski Club means to him and the answers are all about the friends he has made, the experiences he has gained through competition around the world and how it has helped him be a better person.

"There was always a great atmosphere around the club and being part of that was a great experience," said Janyk, who was also Canadian National Champion in 2004 along with his older sister Britt Janyk.

"And I think the biggest thing is that I have gained so many friendships from it."

The Janyks come by their alpine prowess honestly. Their mother Andrée was on the national ski team and their grandfather raced for the University of Zurich.

"My dream for my children is to be the very best, the kind of generous human beings, that they possibly can," said Andrée Janyk just days before she left to meet her daughters Britt and Stephanie to watch Mike race in Torino.

"For Michael to be able to achieve a dream is amazing especially when I think the odds were against him with those two broken legs.

"It feels good as a parent that you have supported your child down the right path. A family gives up a lot to support a child, two children in our case, in this arena.

"I think in some ways you have to be a little bit in awe. You listen to your children’s dreams and I know what it was like, I said I was going to be in the Olympics too and I didn’t make it. But Mike has."