Whistler issues permits for Cheakamus Phase 2 housing—but what will it cost? 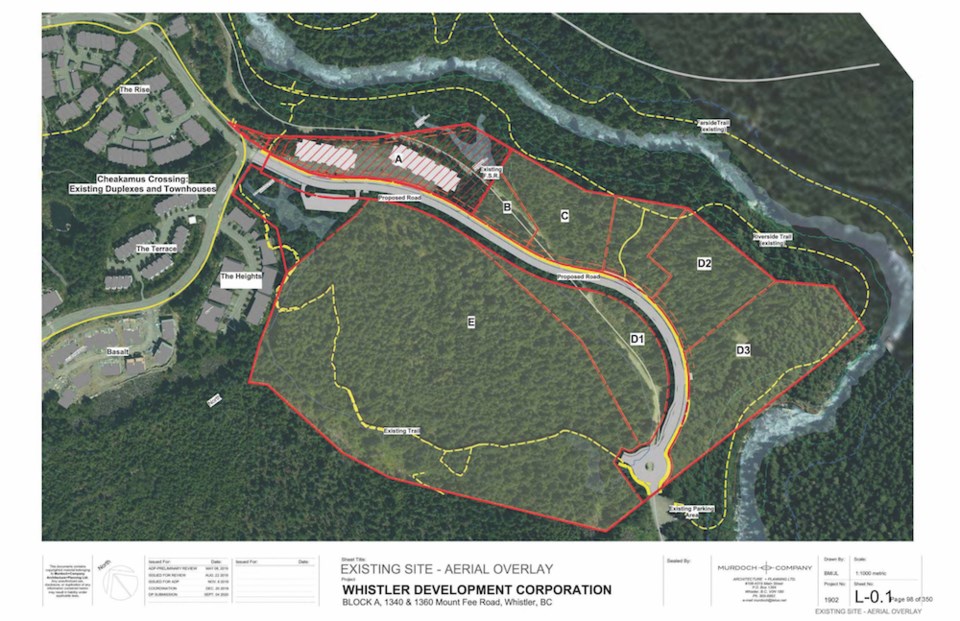 Whistler council voted to approve a development permit for potential employee housing in Cheakamus Crossing. Image courtesy of the Resort Municipality of Whistler

The Resort Municipality of Whistler (RMOW) is advancing what is perhaps the cornerstone of its employee housing future in Cheakamus Crossing, but some key details are yet to come to council.

Namely—the total cost, financing options, and whether two proposed apartment buildings will be rental or ownership.

Nevertheless, council voted to approve a development permit for the build at its Sept. 15 meeting.

The permit will allow for construction of two, four-storey employee housing apartment buildings (100 units and 138 parking spaces), as well as the extension of Mount Fee Road and other related infrastructure.

But the lack of finer details gave at least one councillor pause.

“This may be the largest project we’ve ever built, or the most expensive project the municipality has ever built, and so my concern is that I think that there needs to be more consultation about the cost of this, the potential debt burden, on the municipality,” said Councillor Cathy Jewett.

The project is continuing along two separate processes, a municipal spokesperson clarified later.

“Any financing by the municipality for the project, e.g. borrowing/debt to be considered, is required to come before council with a range of considerations including rental rates etc. and how any debt would be repaid,” the spokesperson said, adding that the Whistler Housing Authority also has a grant application submitted to BC Housing for the project.

The Whistler 2020 Development Corp (WDC)—the RMOW subsidiary tasked with developing the land—will bring a business plan with financing options at a date to be determined, they added.

The WDC hopes to break ground next month.

“If we can actually get shovels in the ground by fall, I think that will be a real accomplishment for this council,” said Coun. Ralph Forsyth, crediting the work of staff and Coun. Duane Jackson, who oversees council’s housing portfolio, in particular.

“I know we’re in a COVID crisis now, but we’re going to come out of this and we’re going to need these units, so I’m happy to move this along and get those shovels in the ground.”

Whether the new buildings are rental or for purchase will also be decided through the financing proposal (though the WHA’s grant application is for rental).

Planning and design for the site—located at the southeast end of the existing Cheakamus neighbourhood next to the Cheakamus River—has been underway since late 2018.

The current design is a mix of one-, two- and three-bedroom apartments ranging from 49 square metres to 95 square metres.

An initial design proposal was amended to include three-bedroom apartments “to accommodate some of our Whistler families on the waitlist,” said director of planning Mike Kirkegaard in a presentation to council.

“The project was designed with livability in mind,” he said.

“There is in-unit bike storage, each of the units has a balcony or a terrace, [and] there are internal communal spaces.”

Council also endorsed further review and processing of a rezoning application that will pave the way for further development of the lands on Sept. 15.

The proposed rezoning seeks to reduce the minimum parcel area to enable future subdivision of the lands and to allocate the existing permitted density and uses in the zone to corresponding parcel areas, according to Kirkegaard.

The rezoning would also establish the building setbacks for each parcel area within the zone, as well as add daycare as a permitted use.

A “public information and input opportunity” will be held prior to first readings of any rezoning bylaws.

The lands in question are a portion of the Lower Cheakamus Community Land Bank Site, which was granted to the RMOW for affordable housing as part of the 2010 Winter Olympic and Paralympic Games legacy agreement.

“I am so pleased to see this rezoning in front of us. This is work that sets Whistler up to deliver affordable, quality housing into the future,” said Mayor Jack Crompton.

“We all know how critical this kind of housing is to our town … I look forward to hearing our community’s comments on the rezoning when it is in front of them.”