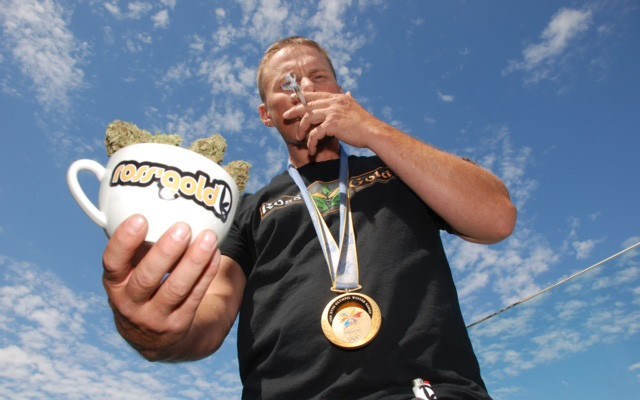 HIGH HOPES Former Olympic snowboarder and entrepreneur Ross Rebagliati said the economic windfall could be "astronomical" if the federal government follows through on its promise to fully legalize marijuana in Canada. Photo by Kelly Hayes / Courtesy of Ross' Gold

"It was the biggest election of my lifetime," he said.

The Olympic gold medallist had a vested interest in the election's outcome as the founder of cannabis and glassware company, Ross' Gold, and, like a lot of others on the groundfloor of Canada's pot industry, he's poised to take advantage of the "astronomical" benefits linked to one of Trudeau's major campaign promises: the full-scale legalization of marijuana.

At this point, exactly how and when the regulation of Canada's cannabis market will take shape is unclear, but there has been consensus on one thing: the enormous financial windfall legalization could bring. Stocks for Canada's top medical marijuana companies soared following the Liberals' win, with analysts predicting the country's recreational pot market could ultimately be worth up to $5 billion.

"I quickly needed a bigger calculator after I crunched some numbers," Rebagliati said. Rebagliati's original dream for Ross' Gold was to offer high-grade strains at a storefront in Whistler Village. While he still maintains that goal, he's since expanded his company's mandate to offer branded marijuana and cannabinoid products through several licensing partnerships he's secured in the U.S. He believes the in-roads he's made in the American market will allow him to take full advantage of a future Canadian pot boom.

"We feel like whatever model we end up with here that we'll be well positioned to leverage it," he said.

As a leading vacation destination, Rebagliati said Whistler should also be at the forefront of a burgeoning pot tourism industry should legalization occur.

"Pot tourism is going to become something that you can't ignore, and that's where Whistler's going to have to be progressive and take advantage of it and make sure it happens the way (officials) want it to," he said.

Industry observers have suggested Colorado as a possible model for Canadian legislators, where storefront sales have poured $125 million into state coffers this year. Whistler officials visited several Colorado ski towns on a fact-finding mission last month, and Mayor Nancy Wilhelm-Morden even visited a dispensary in Aspen to get a sense of how the legal sales system operates.

While she's personally in favour of legalizing and regulating pot in Canada, Wilhelm-Morden wasn't ready to take a position on bringing marijuana dispensaries to the resort.

"It really is too early to say," she said. "I want to talk to the community about it. I don't really have a personal view at this point."

While prospective marijuana producers are chomping at the bit for a piece of Canada's legal pot market, the founder of the Whistler Medical Marijuana Company doesn't expect legalization to drastically impact his business.

"It's so hard to not only get a license, but maintain one, that I just don't see a flood of new producers coming," said Chris Pelz. "There would be a long ramp-up phase regardless, so I suppose in time it might have an impact, but we're focused on the medical market, and I'd like to remain in that market."

Pelz believes the strict regulatory framework put in place by Health Canada to license new producers means Canadians hoping for legalization to happen overnight will likely have to taper their expectations.

"Having been through the development of the regulations around medical marijuana and its production and distribution, the same framework for recreational or fully legalized products would only be more complicated and onerous," he said. "I really believe it'll be two to three years at the earliest before we start to see things materialize."

Since becoming Canada's ninth licensed medical marijuana distributor in February 2014, Pelz said he has seen "slow, steady growth," and believes there's one field where attitudes towards medicinal cannabis may be shifting.

"As a company we are seeing physicians prescribing our certified organic product across the country now, and that's been a real shift," said Pelz, noting that there's been a significant uptick in prescriptions in the last month especially.

"I would have to assume that some of that comes from the new government, for sure," he said, although he added that the company has ramped up its educational efforts promoting its products to doctors across the country.

"I think cannabis-based medicine going forward will continue to have a greater acceptance nationwide."

Earlier this month, Trudeau sent a mandate letter calling for Justice Minister Jody Wilson-Raybould to begin the legalization process and to review current sentencing reforms with the aim of reducing incarceration rates amongst Indigenous Canadians.