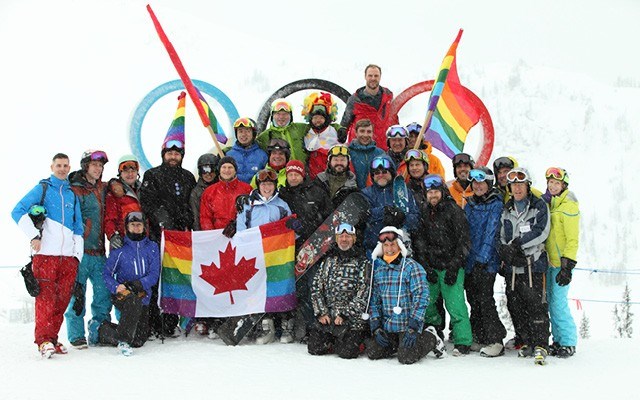 PEAK PRIDE A group of ski guides pose on a snowy day during the 2016 Whistler Pride festival. photo submitted

Whistler Pride, one of the resort's longest-running festivals, wrapped its 24th edition last month with strong attendance, which helped drive a double-digit increase in hotel occupancy.

The LGBT ski week welcomed attendees from 26 countries for the annual celebration of diversity that features social events, comedy, sports and late-night parties.

Although attendance figures are yet to be confirmed, event director Dean Nelson estimated there were about 2,500 ticketholders, on par with last year. Heading into the festival's nine days, Jan. 23 to 31, Tourism Whistler revealed room night bookings were pacing more than 10 per cent ahead of the previous two years, despite a major blizzard that delayed flights from the East Coast.

"It looks like we were right on track to where we expected to be," said Nelson.

Nelson hopes to lessen Whistler Pride's reliance on municipal funding in the future.

"Hopefully we'll be self-sustaining in finding other revenue streams," he said.

Whistler Mayor Nancy Wilhelm-Morden, who declared Whistler Pride week at a ceremony at Municipal Hall, spoke to the financial benefit the event brings to the resort.

"There are significant economic ramifications as a result of the festival," she said. "It initially brought a different crowd than what we typically host, but over the years so many of the participants in Whistler Pride come to visit Whistler at other times of the year as well."

A 2012 study found the event contributed to a $4.6-million industry output in the province and a $2.4-million impact in Whistler. According to the festival's own guest surveys, attendees also stay an average of five days in the resort, and said they intend to visit Whistler at least two more times during the ski season and one time in the summer.

"A lot of guests are really falling in love with the summer aspect of Whistler and we've had guests asking about when we are going to have a summer event, something we've discussed," Nelson said.

Nelson was tight-lipped about next year's plans, but said organizers will continue to "weather-proof" the event through a diversity of programming, and will work towards building interest with potential sponsors.

Looking ahead on the resort's event calendar, Tourism Whistler confirmed room night bookings heading into the Family Day weekend were also tracking ahead of the last two years. B.C. Family Day is scheduled for Feb. 8.

It's a continuation of the strong tourism levels the resort has been seeing, with Summer 2015 breaking room night records, increasing seven per cent year over year, while this winter has also been promising, with both November and December outperforming the same months in 2014.

B.C. is also riding a wave of tourism growth into the New Year. International visits in November were up 14 per cent over 2014, driven by a 27-per-cent increase in French visitors and a 13-per-cent bump in American tourists. Overall, British Columbia saw a 7.7-per-cent rise in visitors between January and November 2015.