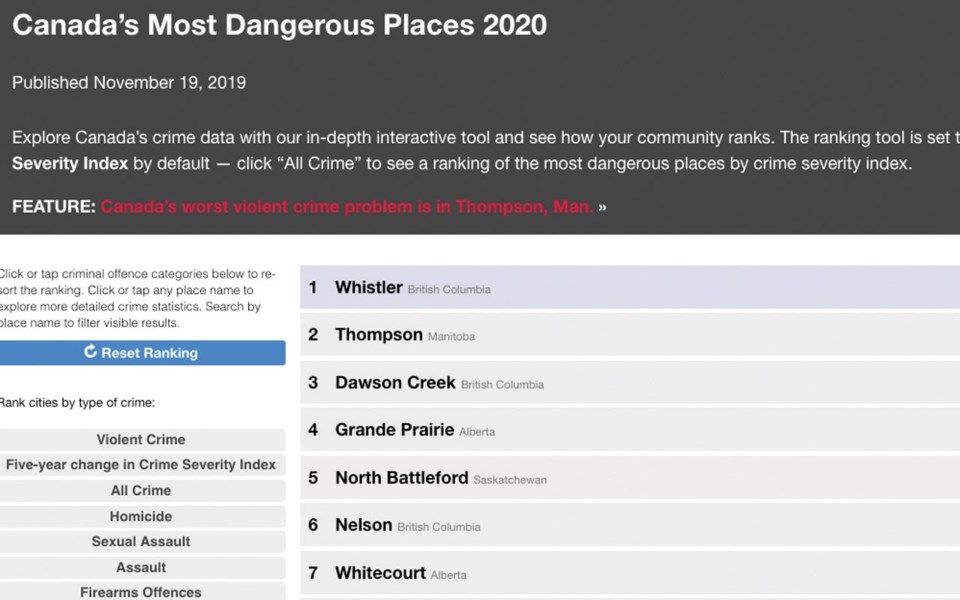 Whistler ranked first in impaired driving offences on Maclean's Canada's Most Dangerous Places list, but the resort actually comes in at 17th once its daily population equivalent is factored in. Screenshot

Maclean's used a 2018 population of 13,056, which only counts the resort's permanent residents, not seasonals or visitors. According to the RMOW, Whistler's estimated daily population equivalent (DPE) in 2018 was 34,347. With 193 offences last year, Whistler had an impaired driving rate of 561.91 offences per 100,000 once its DPE was factored in—still three times the national average. That would rank Whistler 17th out of 237 Canadian communities on the list, just above Penticton.

"I've been mentioning since I arrived here [in 2017] that impaired driving would be a focus and I've never shied away from that comment," said Whistler RCMP Staff Sgt. Paul Hayes.

"We have, over the years, seen a drop in other areas with a high incidence of impaired driving investigations. So we see less crashes, we see less injuries, we see less deaths on the road, but I can't specifically say it's because of our impaired focus. But I think there can be something said towards high investigations in impaireds and then lower in some of the other more serious events that occur out there on the road, and we haven't seen them."

Whatever the underlying factors, there's no denying Whistler police have dealt with a far greater number of impaired driving infractions in the past year or so. Presenting to council in March, Hayes said there were 493 people busted in 2018 for impaired drug or alcohol infractions (which included provincial sanctions such as immediate roadside prohibitions, unlike the Maclean's list), a 72-per-cent jump from the year prior and a far cry from the five-year average of 263.

Hayes added that, with Highway 99 being the main artery that runs through the resort, "it's relatively easy for our members to focus on areas where we're going to get people coming and going ... and we can check for sobriety."

"I think it's all related to the fact that we are hosting a tourist population, and with that comes increased drinking and crimes that are associated in and around that kind of an entertainment atmosphere," Hayes said of the drug-trafficking rankings.

Whistler saw more than double the incidents of fraud in 2018 (87), compared to the year before (42), a trend that Hayes surmised is consistent across the country.

"I don't know that we're specific to that," he said. "A lot of these Bitcoin scam-type things we've seen an explosion of in the last little while."