Whistler RCMP: A year in crime 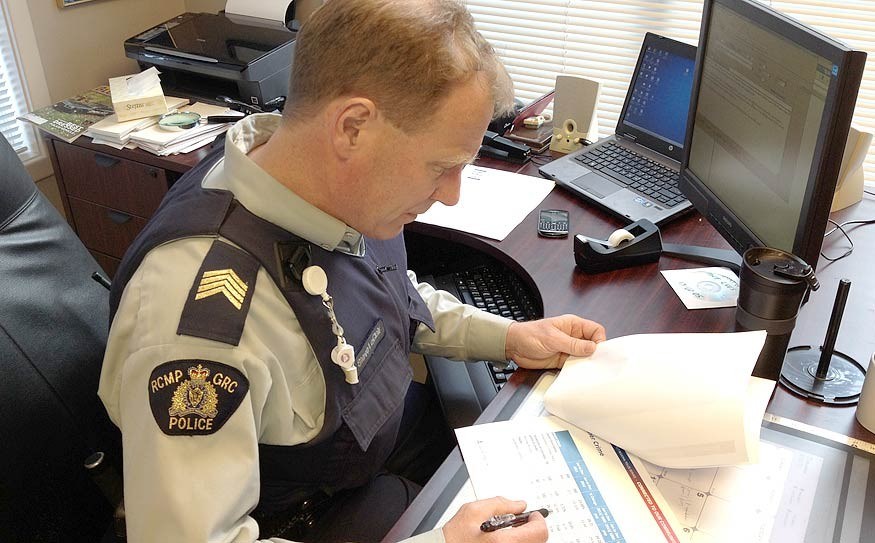 Whistler's top cop, Staff Sergeant Steve LeClair, presented the annual police statistics to council this week, breaking down the more than 6,000 calls to Whistler RCMP in 2012.

He compared the stats to 2011 and provided the context for why some crimes were up, others down, and some remained flat.

"Of those 15 cases, in eight of those cases suspects have been identified and/or charges recommended," said LeClair.

One case was reported eight months after the offence occurred, another four years after it occurred, sparked by a composite drawing released by the RCMP.

The DNA of a suspect has been obtained in one offence and added to the National DNA Data Bank.

While all sexual assaults are serious, he added, some of those reported were cases of groping.

There has also been an increase in assaults, said LeClair, up 23 per cent from 119 to 147. Many, he said, are typically alcohol-fuelled late night village incidents, part of the issues around policing in a resort community.

RCMP members are out on foot patrols trying to mitigate some of those problems.

"All of our serious assaults where people were seriously injured have resulted in charges being laid," he said.

Councillor Duane Jackson asked whether those incidents were logged by time in order to see if there was an effect in council extending Sunday closing times from 1:30 to 2:30 a.m. for certain clubs.

"It'll be interesting to see if there is an increase in disturbance from the 1:30 a.m. bar exit to the 2:30 a.m. bar exit for Sunday," answered LeClair. "Certainly we can look at that going forward."

It's hard to put those numbers into context on a per capita basis, as the population of the resort can fluctuate from around 12,000 in the off-season to more than 50,000 during busy periods.

As for property crime, while business break-and-enters saw relatively little change, up by one from 18 to 19, residential break and enters increased 48 per cent from 37 to 55.

There was a rash of those break-in's in early 2012 with mainly small items stolen from homes with unlocked patio doors.

"We've made some headway in those investigations," said LeClair.

"We have recently identified some prolific property offenders," said LeClair.

"We are now able to charge these prolific offenders and hopefully reduce that for next year."

"This year we are treating this as a high priority item. It's one of our burning issues, bike thefts in Whistler," he said, adding there are a number of initiatives that the police are working on including the Bait Bike program.

"What we've seen is an increase in the Craigslist rental frauds and those are difficult to investigate," he said.

The money, for example, is transferred from England to Nigeria for a rental place in Whistler and the scam isn't discovered until the victim arrives in Whistler and finds no home to rent.

Councillor Andrée Janyk commented on the increase in domestic violence up from 22 to 38 in a year.

"I think it's something as a community we need to be aware of," she said.

Councillors were privy to the information earlier in the day in a closed-door meeting.

When asked why the meeting was held in camera, Mayor Nancy Wilhelm-Morden said: "They (the RMCP) give all the same stats but then there may be some confidential, sensitive information that they want to discuss in private and, of course, it makes sense that we do that."

Councillor John Grills said it would be helpful to see the stats year over year and not just from one year to the next.

The mayor too added that it would be helpful to see a five-year span to look at possible trends.

When asked specifically about the increase in domestic violence, the mayor said earlier in council's day during the Community Enrichment Program presentations there were two requests from the Howe Sound Women's Centre — one from the Whistler Women's Drop In Centre, the other from Children Who Witness Abuse Counselling Program.

"There are social safety nets out there to assist people who have been the victims of domestic violence," said the mayor. "And so it was an interesting juxtaposition of those organizations coming and asking for funds from us in light of the statistics we saw from the RCMP."