After four years at the helm of the Whistler RCMP, Hilton Haider says good-bye
Jul 16, 2004 3:25 AM By: Pique Newsmagazine Staff 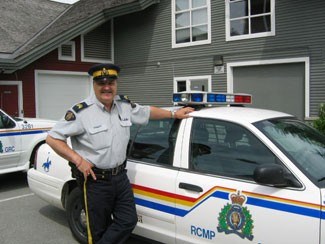 It took a while to get used to policing a resort community, recalled local RCMP Staff Sergeant Hilton Haider.

When he arrived here in the spring of 2000 he soon realized that work in Whistler would be a far cry from the homicides, sex assaults and robberies that had crossed his Maple Ridge desk when he was in charge of the serious crime unit.

Instead, as commander of Whistler’s RCMP detachment for the past four years, Haider has been in charge of the safety and security of tourists and troublemakers, ski bums and stars, Olympic dignitaries and foreign ministers from around the world. He has also had to oversee all of the ordinary concerns and complaints that come from policing a small community of 10,000.

"The challenge of resort policing was something that took a bit of trying to get used to," recalled Haider.

"It is a different policing style."

Next month Haider is trading in resort policing and going back to the big city, where he will be in charge of operations at the Ridge Meadows RCMP detachment.

The staff sergeant reflected candidly on his time in Whistler with Pique’s Alison Taylor this week. He talked about the accomplishments since 2000 as well as those issues that still remain unresolved. He also talked about the road ahead.

Why did you feel it was time to move on?

: First of all, Whistler is a limited duration posting. Our people come here and it’s a four-year posting so we commit to four years. I could have extended another year (but) for personal reasons, family reasons, my wife and I wanted to go back to the Lower Mainland. We would have stayed if the circumstances were right. In some respects I would have liked to have stayed right through until the end of the Olympics. I saw it from the beginning and I would have just liked to see it through to the end. However, there are family commitments, parents that are getting quite elderly and you’re that much further away from them (in Whistler)….

Financially it’s (also) an expensive community to live in. I’m getting paid the same when I work down there but the cost of living is somewhat lower.

I guess maybe, it was time for a change as well. The workload here is quite enduring… It’s just a go-go-go campaign all the time. It’s just relentless.

What would you say has been your biggest accomplishment as commander of the Whistler detachment?

I think the biggest accomplishment here is creating our community partnerships. I think there’s a degree of success with those. The partnership with the municipality of course has always been there (but I worked on) strengthening the partnership with Whistler-Blackcomb… and bringing a lot of the other groups into a working partnership, for instance the food and beverage association, the accommodation sector, the commercial core, the transportation sector.… You know a police service is only as strong as the support it gets from its community. You can have the best police officers in the world in a police service but if you don’t get support from your community, you’re not going to be a very effective police service.… One of the things that I feel that there has been an accomplishment is having a better relationship with our community groups.

Are there any things you wished you’d had more time to work on?

One of the greatest challenges in this community is the noise and, at times, the high risk we have for violence in our village… with some of these groups that are attracted here in the off seasons.

It’s the off season that draws this less desirable group who come here only to abuse the community.

I think that’s one of our great challenges. It’s very, very difficult to do any type of a problem solving…. We can’t do traditional problem solving. If you’re in a non-resort community and you have a particular problem with a clientele group, you can go and meet them and work with that clientele group and get them to either stop it or change their ways or do whatever. But here… it’s new faces each day that are creating the problems. That’s where the challenge is. We’ve taken that zero tolerance with alcohol… I think there’s some decline in our calls for service. There’s still a lot of noise but then we’re a resort and the dynamics of the community, the way the community was built, makes it tough to eliminate the noise.

When you have 1,500 people exiting bars on a Saturday night within a one block radius, you’ve got a lot of noise. And it’s difficult for people to tolerate that.

We’ve tried various strategies. Some strategies have been successful and some we’ve had to revisit.

What policing challenges are unique to Whistler?

…Our tourist accommodation is sometimes difficult to deal with because we have a lot of incidents that happen in our tourist accommodation. We have a difficult time investigating break ins and thefts and vandalism and noise because we have such a large group of bed rentals. Sometimes we only find out about it a couple of days after the fact and then we have to go track down people that are all over the world.… That’s the resort policing challenge that is very difficult to deal with.

We find a lot of our investigations where we have a potential for laying charges that we don’t lay charges because our witnesses and sometimes our victims are international and they just don’t want to come back.… That’s the nature of the beast.

First Night 2000 was described as a "near riot." Tell me how it’s changed over the past four years under your leadership.

The first First Night was my first one here. We had a commitment from the municipality to take a zero tolerance and turn that around from previous years where it was a just drunk-fest basically with noise and parties and open drinking everywhere. The liability for serious injury was very, very high….

We took the zero tolerance approach to it and yes we arrested 106 people. I think the report of a "near riot" was erroneous. It was quite hectic there’s no doubt about it… the disposal of liquor that year was quite high. I think we’ve turned a corner on that.

The other objective of the municipality was to make it a family event… I think this year proved it was a very enjoyable event.

I think that’s one of our successes that I can say took place while I was here.

What will you miss most about the job and your life in Whistler?

: I think I’ll miss the type of energy that I see come through the door everyday with all our young people. The energy of the community, especially when you get into the peak times during the ski season. I will miss that, the hustle-bustle, the fast pace.

What are you looking forward to in your new role as head of operations at the Ridge Meadows detachment?

Some new challenges. It’s like anything else. If you’re not challenged, you’re not enjoying what you do… I sort of look at myself as an old teacher because I’ve been around so long.

I enjoy working with young people and it’s not going to change that much for me going down there. I will still see a lot of new faces and young energy.

It’ll be a different style of policing of course because it’ll be a non-resort community.

You’re dealing with a more diverse community where Whistler is very unique as a community. Down there it’s more of a traditional community. You’ve got the poverty issues. You’ve got family violence issues, which we don’t have here. You have other issues in schools with kids, and you have to deal with your high-risk offenders, which we don’t see openly here.

: What advice would you give for your successor, Norm McPhail?