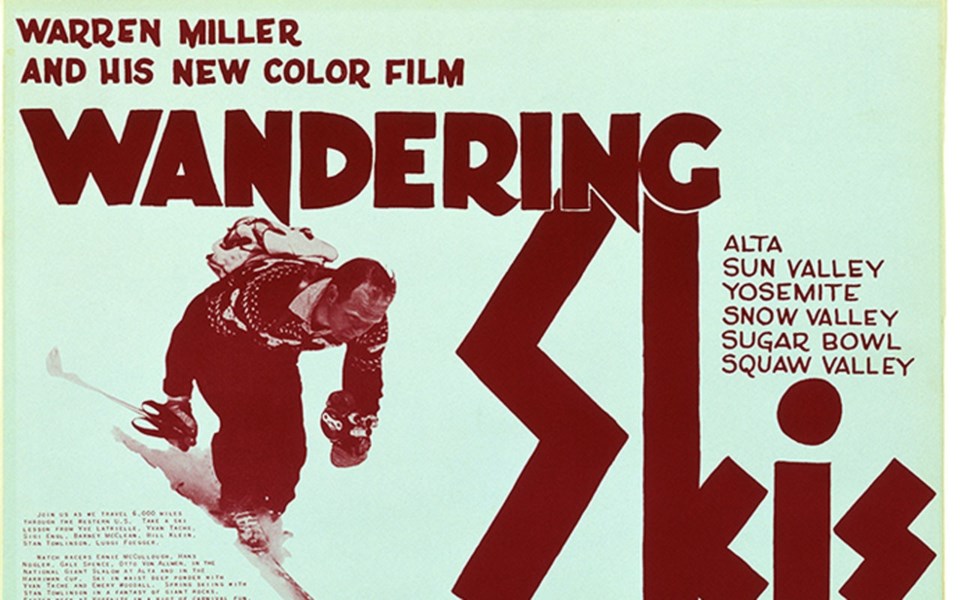 Born in Hollywood in 1924, Miller learned to ski on Mount Waterman, near Los Angeles, and quickly fell in love with the sport. "I really believe in my heart that that first turn you make on a pair of skis is your first taste of total freedom," he would later explain. "And I show that in my films. I didn't preach it."

Following a stint in the US Navy during the Second World War, Miller dedicated himself to documenting the sport. In the process, he helped grow it, creating films that appealed to a broad audience.

Armed with a Bell and Howell 8 mm, he spent those early years in a teardrop trailer, living in parking lots at Yosemite, Sun Valley, Jackson Hole, Aspen and Mammoth Mountain. Miller would travel to various cities, narrating his movies in person. In the 1950s, Miller hooked up with Whistler legend Jim McConkey, who would go on to be featured in some of his films.

"Warren's films were the beginning of the ski season — and everyone looked forward to them," recalled McConkey, who described Miller as "wonderful" friend who always kept in touch.

In addition to first-rate skiing, the movies featured a healthy dose of humour. People falling of chairs, it seemed, was a staple. A montage of people falling off the Olive Chair, an early two-seater chair on Whistler Mountain, sticks out to McConkey. "God it was funny," he recalled, with a big laugh.

In 1995, Whistler took centre stage in Endless Winter, which featured the likes of Greg Harrington, John Treemen, and Scot Schmidt, jump-turning down some of Whistler Blackcomb's gnarliest alpine on long, skinny skis. At one point, Treemen launches an impossibly large cliff. Landing on his back in deep powder, he bounces back onto his feet then rides away. "I saw it, I looked at it — and then I launched it," he explained, staring straight into the camera.

For a young Mike Douglas growing up on Vancouver Island in the 1980s, Miller's films represented "the fantasy of how one day I'd hope I'd get to live my life." To see them, Douglas would travel from his home in Campbell River to Nanaimo. "The movie never quite made it to Campbell River — we weren't big enough. It was a bit of a commitment to go see it. But I made the effort every year," said Douglas.

"I remember feeling so energized coming out of one of those shows. I remember thinking it's so good that I can't go skiing right now, because I'd get so excited that I'd just explode on the hill and want to jump off everything," said Douglas, who would later be featured in some of Miller's movies.

A few years back, Douglas was able to spend some quality time with Miller at the Yellowstone Club, a private ski club in Montana where Miller spent winters. At 90 years old, Miller was still spinning yarns.

"He's one of those guys who can recite the details of every story, whether it was two weeks ago or 50 years ago. He loved telling stories. And to hear them in his voice was just this surreal experience," said Douglas.

"Every time you heard him speak, you kept expecting the next line to be 'if you don't do it this year, you'll just be one year older when you do.'"

When asked what set Miller's movies apart — what explained their popularity and longevity — Douglas said that it was Miller's ability to tell stories.

"Warren was a storyteller," said Douglas. "It was like, we're going to go on a journey around the world — he's going to tell us a story and make us laugh, and we're going to get to see some spectacular images."