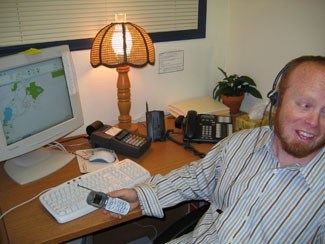 Whistler Resort Cabs has made an impact in Whistler since it started operations on June 25, but according to Gord Walsh the cab company has more going for it than just roomy vans covered in traditional yellow paint.

Walsh, the president of Future Quest, a wireless communications provider, says that Whistler Resort Cabs was the first cab company in the world to use GPS wireless mobile telephone technology in their taxis.

The technology is useful for many applications but most importantly it allows Whistler Resort Cabs to reduce the amount of time it takes for a client to book a cab.

The system also allows the dispatchers to see where the cabs are at all times and can even be organized to automate itself.

"There’s no other company that has this technology and I don’t just mean from us, I mean from anywhere," said Walsh.

"The result of this system is that it radically speeds up call taking – the average time is about six seconds.

"Then those trips that are booked into the system and as Whistler Resort Cabs grow they could have five or six callers and one dispatcher."

Walsh, who was largely responsible for designing the dispatch system, said another advantage was that it did not require the company to install $2,000 worth of hardware into the cabs because it works from a phone.

"With this system we’ve been able to leverage new technology to provide fully automatic dispatching that normally requires a $2,000 hardware solution – and we’re able to do it all from a mic-phone."

Walsh said this kind of dispatch system was also useful because it allowed the drivers to remain in contact with dispatch while they were away from the car.

"This allows us to use consumer technology to bring high level functionality into a smaller market like Whistler where normally it might be difficult to justify the kinds of costs that would take.

"We’re using this brand new technology because Telus has new GPS enabled mic-phones available, which is a brand new thing and totally amazing – the fact that you can have a GPS receiver in a tiny phone.

"The phone also has Java capability (computer language that allows for moving images), so we’ve got a dispatch software application that runs on the mic-phone… and it’s built into the Telus network.

"There’s no way you’d even be able to do this even six months or a year ago."

Garth Wardel from Whistler Resort Cabs said he enjoyed the system because it allowed the dispatcher to watch where every cab is on a computer screen.

"We use GPS in phones to position each cab on the map," said Wardel.

"So you can see when your cab is on standby, or if it has been stationary for a long time. It certainly means that the driver won’t be going off on joy rides either, but that doesn’t really happen anyway."

Wardel said it had been quite simple installing the system into the company’s 15 taxis.

"It’s been a lot easier because there’s no legacy systems you have to eradicate or have to convince people to change because everything’s new."

In other transportation news, there has been a merger between two of Whistler’s biggest luxury transportation companies, Glacier Coach Lines and Whistler Limousine.

The new owner of both transportation groups, Joel Wilson, said it had been a great summer for both companies.

"Conferences for this summer have been just incredible – we’ve got them back now – but over the past few years we’ve been really hit hard with everything," said Wilson.

"The war, SARS, the dollar, fires, floods – we’ve lost so many conferences over the last couple of years, but this summer they were all coming back… it’s right back to like four years ago."

Wilson said he made the decision to pursue Glacier Coach Lines because the company was so similar to Whistler Limousines and it also gave him an opportunity to buy bigger vehicles.

"It worked out well because the synergy between Whistler Limousine and Glacier Coach Lines was just perfect, we have the clientele, but we needed some larger vehicles.

"In the limousine business there’s so much competition and so many people running illegally. It’s so hard when you try and do things legal and somebody comes in with a Suburban and just goes and runs illegally, they start taking your clients just because they’re cheaper."

Wilson said his goal was to create the largest Whistler-based luxury transport group prior to the 2010 Olympics.

"Overall we needed transport from a sedan to a 57-seat passenger coach and everything in between, which is where Glacier Coach Lines comes in.

"Especially for the Olympics and everything else, so many people are trying to get in, but you have to be in the industry to understand it’s a hard industry to be in."