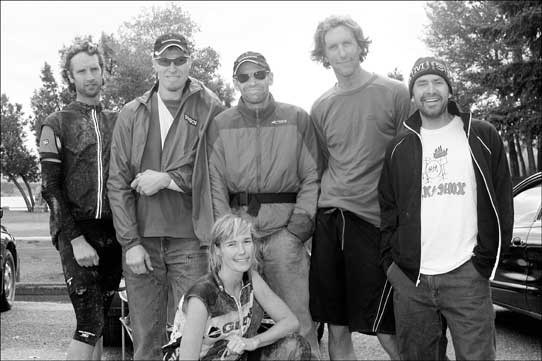 The seven day, 600-plus kilometre TransRockies Challenge wrapped up at Panorama Mountain Village on Saturday, with riders making the final grunt from Invermere. Several Whistler riders took part this year, several of them making the podium in their respective categories.

The race started at Fernie the previous Saturday, with riders taking a network of backroads and trails from stage to stage while accumulating over 12,000 metres of climbing.

Whistler’s Jennifer Tabbernor competed in the 80-plus mixed category with Jeff Bandura on Team BikeKootenayRockies.com, completing the course in 44 hours, 37 minutes and 26 seconds. The team started strong and placed second in one stage.

After the sixth leg they were about an hour and 20 minutes back of second place, but they lost time on the grueling 1,400-metre climb to the finish to wind up over four hours back of the silver medal.

"It was awesome," said Tabbernor, who races for Team Whistler and was competing in her first TransRockies Challenge. "It was spectacular scenery, and there was a lot of new trail cut just for that race, nobody had ever been through there. In one stage we went through grizzly bear territory, and they had to go in ahead of us to scare the bears away – it’s probably a good thing because it was a four kilometre hike-a-bike and we weren’t moving very fast.

"It was really challenging, but you got to meet awesome people from around the world, and the race was really done well from an organizational standpoint."

Tabbernor’s only complaint had to do with her partner, who she never met before the ride. She teamed up with Bandura through a mutual friend, then discovered that Bandura’s fitness level was not up to the demands of the race. Tabbernor had to pull her partner up some sections on the final day, where they lost several hours on the rest of the field.

Tabbernor’s next big mountain bike race will be the West Side Wheel Up, followed by the Cheakamus Challenge. She’s also hoping to race in the fall provincial cyclocross series with her Team Whistler teammates.

It was a close race for first overall this year, as the Rocky Mountain team traded stage wins with Mountain Bike City and United Cycle Trek teams over the course of the race. Hestler and McGrath had about 10 minutes on the field in the last leg when Hestler’s stomach troubles from earlier in the week kicked in again, but the team held on to win by just two minutes and 44 seconds.

Mt. Currie’s John Inglis and Lon Martin also raced for The Haywoods, finishing 23 rd out of 76 teams in the Open Men’s category with a time of 38:51:41.

They started strong before hitting their low point on the Wednesday with temperatures in the mid-30’s. Inglis had to be revived after the fourth stage by an intravenous drip, and they took it slow the following day. They started to feel better by Friday as the weather cooled off, and placed 15 th on the last stage.

"It was really challenging, but it’s fun – it’s something you would have to do twice or a bunch of times to do really well because there are so many variables to the race," he said. "There’s the weather, feeding yourself, getting up every day to ride. Multi day stage races are tough, I’ve never done one before, and getting out of bed was hard."

Inglis started training for the race in January, spending time on the trainer until the snow melted enough to ride in Squamish and Pemberton. He also raced in the Test of Metal. Still, if he had to do it over he says he would probably spend a lot more time on a road bike.

"There are a lot of logging roads, and some sections you’re doing 38 km on a logging road with an eight per cent grade. It was something you needed to train to do really well," he said.

"We’re pretty happy. We finished strong and felt good at the end, which was a positive thing considering how we felt after that one day."

In the Open Mixed race the Crissi-Crystal Hotels team, Pemberton’s Hillary Harrison and Ryan Watts, placed fourth overall in 35:39:15, less than half an hour back of the podium. They raced consistently, finishing between second and sixth in the seven race stages.

In the Open Women category the Uncivil Servants – featuring Whistler’s Lesley Clements and Nikki Kassel – placed third overall in 43:57:19. They won the first four stages and placed second twice, but took a 12-hour penalty when Clements was unable to complete stage six after injuring her ankle the day before in a crash.

"We had an hour lead after stage four and we were building on that (in stage five), but it’s such an insane race and so much can happen that an hour isn’t much security," she said. "Then I did my ankle on stage five and on stage six, which has a long hike-a-bike, I had to make a decision to pull out. If I went out into the forest I’d still be out there crawling up that path. The mud was up to your knees and you had to carry your bike over your head.

"I decided it’s not worth killing myself and being heli-evac’ed out. I was also thinking that it wouldn’t be fair to endanger other people if I had to be rescued.

"There were a few tears, but Nikki was really good about it."

As per the rules, the Uncivil Servants were penalized the slowest time in their category plus two hours. Knowing the competition was over for her Kassel helped another rider who had a stomach virus, pulling him up the hill.

The following day Clements taped her ankle, took some painkillers, and managed to finish under her own power to keep third place.

Despite the hardship – seven days sleeping in a wet tent, and the hardest riding anywhere – she says she would do the race again.

"It’s weird, at the time I said I would never do it again – even people who do Ironman said this race is so much harder… but I think I’m game to do it again. It’s an unbelievable event," she said.

Whistler’s Mike Edwards raced with former local Rich Hamilton on the AreaConnect.com/Different Bikes team, placing third out of 45 teams in the very competitive 80-Plus Men’s category.

According to Edwards they didn’t have any expectations going into the race, but when they found themselves on the podium after the first day it was on.

"It was a battle for us to stay on the podium after that," he said. "We wanted to stay there, which was tough because the 80-plus category boys were highly competitive – a lot of older racers and elite athletes of some sort."

Although competing left Edwards just two weeks to rest up for Ironman, he says he enjoyed the experience.

"It was really exhilarating, just to be out there. We were in some pretty exposed areas and it was a brand new course," he said. "There were amazing lookouts, amazing views, and we covered a big chunk of Kootenay territory. It was like a moving army, 600 people riding, all these people transporting tents, setting up food stations – it was a pretty impressive organization."

Pemberton’s John Chilton and Chris Malthaner also took part, racing as Bo’s Buddies, but were sent to the back of the 80-Plus Men’s category after one of the riders was taken out with a shoulder injury.

For complete results and more details on the race visit www.transrockies.com.