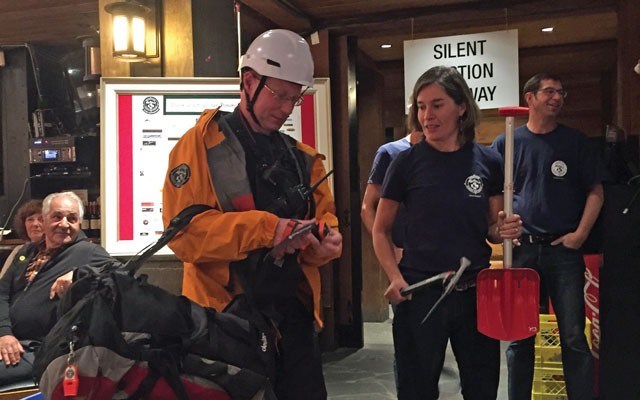 Ready for action Members of Whistler Search and Rescue made a display of their work at their annual Wine'd Up dinner and fundraiser on Oct. 15. PHOTO submitted

Whistler Search and Rescue's (WSAR) biggest annual fundraiser is in the books.

The 17th annual Wine'd Up dinner and fundraiser on Oct. 15 brought in about $75,000 after expenses, said WSAR manager Brad Sills.

The money will primarily be used to upgrade digital radios and buy gear for new members, Sills said, adding that WSAR is also looking at options for "first responder" vehicles — possibly e-bikes or small trail bicycles.

"The traffic is so bad in Whistler it takes a long time to get places — if you even can," Sills said. "So it's just something that we're looking at as a possible solution."

Nonstop rain in recent weeks has quieted things down for WSAR after a busy October, which saw crews respond to some serious injuries in the Callaghan Valley.

"Typically, falls are pretty quiet for us," Sills said.

"It's just again another indication of the changing pace of recreation here, and I suspect social media plays a part in it all... heightening the opportunities that exist."

If people are heading into the backcountry at this time of year, they need to be cautious, Sills said.

"There is lots and lots of rock around, there's open crevasses, it is one of the most hazardous times of year to be out there backcountry skiing," he said.

"Definitely be prepared, and bring more stuff than you think possible... stick together, and preferably go with people that have considerable experience at this time of year. Avalanche hazard is very present... there's just a myriad of ways that nature can take you down."

At Whistler Blackcomb (WB), preparations are well under way for opening day — which means terrain is off limits as crews are hard at work.

Snowmaking operations mean loud machinery, hoses draped across runs, snowmobiles and more, and that's before you get into the natural hazards.

"It's all those early-season hazards, all the shark fins lurking underneath a shallow snowpack, the ditches, the rocks, the little pungy trees that stick out," Mercer said.

"And then above treeline, that's when you start to look at significant natural hazards, so crevasses, cornice falls, avalanches, and you're still dealing with the thin snowpack and an uncontrolled environment."

Most locals know the mountain is currently off limits, but there have been some eager newbies getting turned around in recent weeks, Mercer said.

"When we see them on the hill we just inform them, and once we inform them and give them the big picture on what the hazards are at this time of year then they're pretty cooperative, and most of the time they're pretty thankful," he said.

"I think they're a little bit bummed that they've spent a bunch of calories to get halfway up the hill and turned around."

But getting turned around is better than the alternative — a season-ending injury or a pre-season ban.

"We're turning people around at this stage," Mercer said. "We can pull passes and depending on the circumstances we will be pulling tickets."