Whistler search and rescue welcomes provincial commitment of $10 million to SARs across B.C.

One-time payment will be used for training, equipment and administration
Jan 28, 2016 2:22 AM By: Braden Dupuis 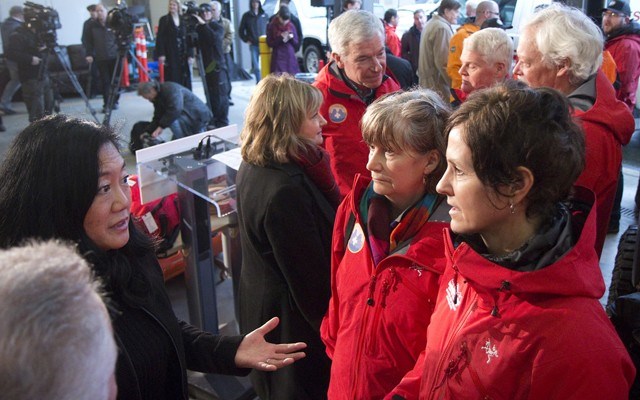 MAJOR BOOST Minister of State for Emergency Preparedness Naomi Yamamoto speaks with search and rescue members at a funding announcement on Jan. 27.

B.C.'s search and rescue teams got a major boost this week.

"It's fantastic that the province recognizes the efforts that so many people in this province put out there on a daily basis," said Whistler Search and Rescue manager Brad Sills.

"It's very gratifying to see that recognition."

It's too early to say how the money will be allocated, but there are some areas that should take priority, Sills said.

"Every person that is volunteering to go and assist other people in the province needs to have proper outerwear and personal protective equipment. That needs to be, to my mind, the first priority," he said.

"After that I think training would follow, so that everybody has appropriate levels of risk management under their belt so that they can realistically look at a situation and determine how best to approach it."

Whistler Search and Rescue is made up of 32 volunteers and typically operates on a budget of about $150,000.

There are 80 search and rescue groups across the province.

"It's a small army of 2,500 volunteers that comb the province's backcountry, rappel into steep ravines and weather the worst of the elements, while leaving behind the comforts of home to go seek and find those who are lost or injured," said Minister of State for Emergency Preparedness Naomi Yamamoto, in a press release.

"Their selflessness is woven into the fabric of their service, and today's investment continues on our commitment to strengthening them and the tapestry of public safety throughout the province."

Once it's allocated, the funding will be spent according to the needs of local ground search and rescue teams.

"The service that search and rescue groups provide in their communities is recognized as an invaluable asset to the people of this province and today we welcome the additional support of the B.C. government to help strengthen the work that's being done," BC Search and Rescue Association (BCSRA) president Chris Kelly said in the release.

"While we continue to work with the province on the proposed alternate support model for search and rescue, this money will help relieve some of the funding pressures and provide for increased training and other tools for those who tirelessly serve as volunteers."

The B.C. government currently provides $6.3 million to search and rescue groups each year.

"We are fortunate within B.C. to have such a dedicated group of individuals who make serving the safety of others their passion," minister of transportation and infrastructure Todd Stone said in the release.

"Within ground search and rescue there are roughly 100,000 hours of volunteer time donated to searches; to replace these would cost more than $5 million annually in direct salary dollars. We are grateful for their commitment and in turn, government is strengthening its commitment with this one time grant."

Pick up next week's Pique for more and go to www.piquenewsmagazine.com.