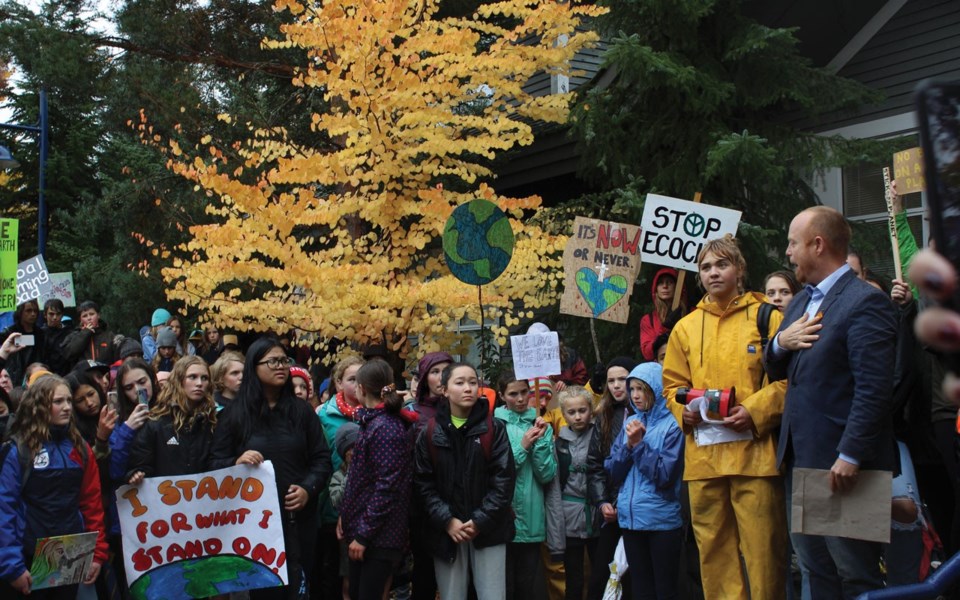 With daily headlines and millions marching in the streets, 2019 was something of a banner year for climate change awareness.

And at Whistler's Sept. 27 climate march, Whistler Secondary School (WSS) student Jade Quinn-McDonald was right in the thick of it.

"It was definitely life changing ... seeing the feedback from the community and from the mayor has been really amazing," said Quinn-MacDonald, who serves as president of the WSS' environmental club and spoke at the Sept. 27 post-strike rally.

Mayor Jack Crompton pointed to the climate march as one factor that led to WSS students getting free bus passes this year, Quinn-McDonald said.

"That was great to hear, because it was kind of a direct consequence of our actions," she said.

"So that was really amazing, and I think next year, someone else will be inspired by my actions, and by previous leaders' actions in the school, just to keep the strikes going and keep action against climate change going."

The WSS environmental club and its 12 members took on a wide range of initiatives in the past year, including waste management and education, school-wide challenges, a workshop with the Association of Whistler Area Residents for the Environment, addressing the mayor with specific issues and the aforementioned climate strike.

The club meets every Thursday at lunch and usually tends to have a couple initiatives on the go, Quinn-McDonald said.

One recent global initiative saw the club raise $1,600 for hurricane relief in the Bahamas, Quinn-McDonald said, adding that raising money for those affected by the bushfires in Australia is likely to be the club's next global project.

Though Quinn-McDonald, 17, is graduating a semester early from WSS and heading to Vancouver Island to do an outdoor education program, she's confident the club will find new leadership.

"We've actually got three really motivated grads who want to sort of battle it out to take on the role of president, which I'm really looking forward to seeing," she said, adding that anyone who wants to get involved can join the club.

"These days we have a pretty consistent group of kids who show up every week and make the effort and put in extra time whether it be their recycling duties or fundraising, and we could always use more members."

Quinn-McDonald wanted to thank her teachers at WSS for their support, in particular the club's sponsor, Emma Stapleton.

While addressing climate change can seem a daunting problem when taken as a whole, Quinn-McDonald said it's about bringing it back down to a personal level, and things you can change in your own life.

"I would just say it's our future. It's in our hands. Whether you believe in climate change or not, our actions all have consequences, and I just think it's really important to bring it down to a personal level," she said.

"I think it's really important to have a leader who can really bring it down to a level that is achievable for everyone."

Asked about his chat with Quinn-McDonald, Crompton said he thanked her and the club for its advocacy.

"It has resulted in action taken by our municipality. We are enthusiastic about getting high school students free transit and hopeful that will help people take climate action in their day to day lives," the mayor said.