Whistler seniors gear up for future 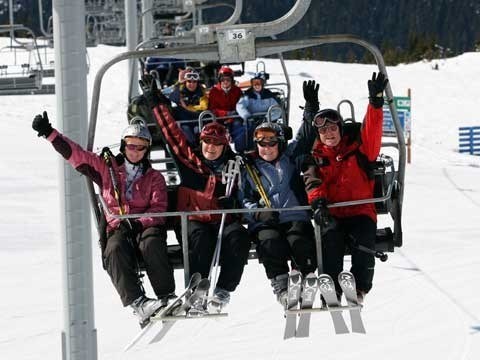 American author and columnist Doug Larson famously said "the aging process has you firmly in its grasp if you never get the urge to throw a snowball." It's an apt quote for the aging Whistlerite.

Though Whistler carries a reputation for being a summer and winter destination popular with the transient twenty-something set, 1,100 residents over the age of 55 call it home and the numbers are growing. Some have raised families here, others have been skiing Whistler and Blackcomb since bindings were made from leather. Now financially secure baby boomers are hanging up their weekend warrior titles and retiring in these hills full time.

While most Whistler seniors are active and healthy, specialized services are still necessary for the aging demographic, which is why the Resort Municipality of Whistler, Whistler's Mature Action Committee (MAC) and the Whistler Community Services Society (WCSS) have joined forces to help expand and connect what is available for seniors.

"We decided to pull this together so seniors in Whistler could have the opportunity to interact with the service providers in Whistler, and also to see what is available," said Deller. "There is so much opportunity for other people to participate in all aspects from mental health to nutrition, there are so many services in Whistler that are made for seniors and it's just about bringing everyone together to show what is available to the population."

The proportion of B.C.'s population aged 65 and over has increased dramatically, from 9.3 per cent in 1971 to 12.8 per cent in 1993 and will rise to 18.3 per cent by 2021. In Whistler, Squamish and Pemberton issues around housing are especially pressing for the aged, as many seniors prefer to remain independent, which often requires specialized care.

"Our goal is to keep people in their homes for as long as possible safely, and well looked after," said Francesca Cole, a homecare nurse with Vancouver Coastal Health Home Support Services in Whistler and Pemberton.

"We're going to get busier as the population is aging and while we're very lucky in this corridor - our seniors are very healthy - there are always going to be issues and it's nice to be dealing with them up front and getting that connection with them early so they can make their time more successful and stay in their homes."

Seniors housing is available in Whistler, but it is unlikely that an assisted living complex could sustain itself at this point. Squamish Renaissance, a new assisted living complex in Squamish, is at 52 per cent capacity one year after opening its doors. Renaissance administrative assistant Lesley Rommel said the hardest part of getting seniors to address their living situations has everything to do with the perception of independence.

"They generally feel that they're getting gotten rid of, but once they move in and see how beautiful it is and that it's not a place where they've gone to get sad they do complete turn-arounds," she said.

She added that mountain communities can be very isolated places for the elderly.

"If you're a recluse in the city usually there are more neighbours that will notice that you didn't come to Save-On (Foods) that day, but in some of the outlying areas where you might not see somebody everyday it might be days before you notice, and it might be too late at that point."

RCMP constable Tara Merrie was on sight at the fair teaching seniors about elder abuse, regulated funeral organization and personal safety. As she handed out self-assessment driving tests for seniors she encouraged them to take a little "honest time" about their own mature driving abilities and to tailor their road time appropriately.

Also on hand were a number of brochures outlining fraud and scams geared towards the elderly.

"Education is the most important thing in crime prevention. If people are equipped with understanding how they're being targeted we are that much closer to preventing a crime from actually happening," said Merrie.

"Historically, there is a lack of reporting, generally people think they should have known better. They think 'I've lived this long, I've travelled, experienced the world. How did I not know this guy was a fraud?' We often don't even hear about the fraud because the person is embarrassed that they were bamboozled and tricked."

The fair wasn't focused on all things solemn. A number of tables featured cookbooks and nutritional suggestions specific to the aging body. Others offered options for keeping fit and social during the long winter months.

Seniors who love to ski but prefer a little companionship and instruction were pointed towards the Whistler Seniors Ski Team booth, presided over by the buoyant Wendell Moore. The team has 230 members, two-thirds of who are over the age of 65 and five over the age of 80. Members typically set out on ski days with a coach in groups of seven, which Moore says is a great way to limber up during the ski season or to ski safely if balance or eyesight is becoming an issue.

"It's like your day where you get to socialize or network so from there you can meet other ski buddies and things like that," he said. "A lot of them get really serious and others are there to just have fun. There are actually some that are a little crazy. They'd rather be off-piste then on-piste."

Glen Bayliss has lived in Whistler since 1995. The 61-year-old attended the fair with his wife to visit friends and see what kinds of services are available to them. Though his number one wish - a curling rink for seniors - isn't being addressed, he found plenty of good information at the other tables. He said while seniors' services in Whistler are decent, he's seen lots of folks move to the city to be closer to specific amenities.

"Absolutely. The specialists weren't here. There were no social programs here. If you had a spouse that was disabled there was very little support available, but there still is lots of room for improvement in that area," he said.

"Whistler has changed a lot. There were no parks, no valley trails, no recreation centre. For a small town the amenities we have are just incredible. We still need to get a curling rink for seniors and we still need to get a seniors centre, the winters are long here and the nights are dark. There's not a lot to do in the evenings for seniors unless you're involved with specific clubs, as a social group some of those things are still missing."

Using an $18,000 grant from the Union of British Columbia Municipalities, the municipality, WCSS and MAC produced the Access Whistler Guide, a resource magazine for seniors released in September. They also held an Aging in Place community forum in mid-October, which was used to collect information from older residents related to their needs and concerns. That data is being compiled and will be submitted to the municipality to be factored into the amendment of the Official Community Plan.