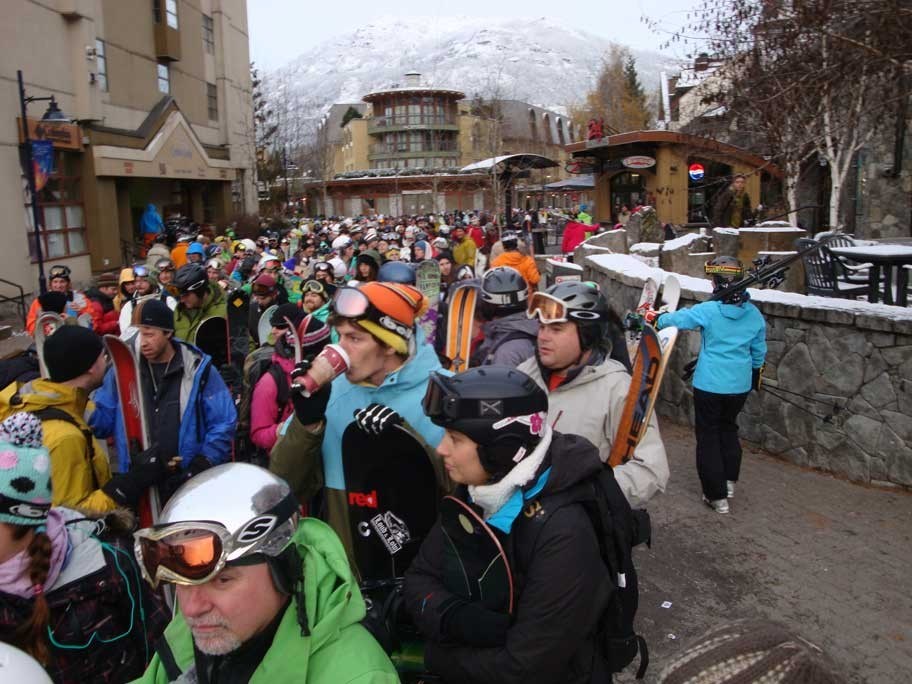 Record reset Tourism Whistler reports room nights up 12 per cent over last December, up six per cent over December 2007, the last record-holder. photo by andrew mitchell

The suspicions have been confirmed: Whistler has another entry in the record books — December 2011.

"It is our busiest December ever," confirmed Tourism Whistler's president and CEO Barrett Fisher.

And the good news doesn't end there.

"January is also pacing very, very strong and potentially could be one of our strongest January's ever as well," said Fisher.

The numbers confirm what those in the know have known for a while; that early season advertising campaigns were very successful in the long-haul markets and Whistler was going to be busy in 2011/12 even before it was blessed with snow. (see related story on page 14)

Now, as it reaps the benefits of a fluky weather pattern that has cursed its competitors across North America, Whistler is sitting pretty... on five and a half metres of snow.

But that doesn't mean resort partners are resting on their laurels. Rather, the opposite is true.

Whistler Blackcomb is pouring tens of thousands of incremental dollars into a major marketing push across Canada and into the California marketplace, trying to capitalize on the stage that has been set in the lead up to the winter season.

"It's a significant investment."

That means more snow alerts with tour operators and pumping up print advertising like the two full-page ads that ran nationally in the Globe and Mail over the last two Friday's, among other things.

The Fairmont Chateau Whistler also had a full-page ad on Saturday, boasting of the snow conditions here.

Added Rempel: "I would argue that there's hundreds of thousands of dollars being spent in the resort right now, incremental dollars, to try and get people here, by not just Whistler Blackcomb."

At the same time, Whistler Blackcomb launched a 72-hour sale this week for select dates in March and April. The idea is to fill in the mid-week need periods.

"There's still occupancy available," said Rempel. "We don't want people to think all of a sudden that we're sold out here. We've got a big winter ahead of us and lots of availability and we want to keep selling this place."

But at what price?

While room night stays are breaking records, room rates stayed flat or even dipped by two per cent resort-wide overall in December.

That's a concern for hoteliers.

Douglas is also chair of the Hotel Association of Whistler.

"The accommodation sector continues to be concerned about the deterioration of average room rate," he added, with one of his properties seeing a four per cent increase in room rates over last December, the other staying flat.

That being said, December is a difficult month to make sense of the numbers because the rates vary so drastically from the beginning of the month to the end of the month.

The true picture of the room rates won't emerge until closer to the end of the season.

In the meantime, while it may be tempting to increase rates because Whistler has the competitive edge, that's not the right strategy, according to Rempel.

"We just have to be really careful that we don't get too carried away as a resort and all of a sudden jack up our rates."

Recouping room rates can only come, added Douglas, as demand increases. And it still remains to be seen if the rates will ever fully recover to the top prices once seen.

"The first step is creating more demand and seeing some successful winters and, most importantly, seeing some guests have some great times," said Douglas.

That's exactly what's on Whistler Blackcomb's mind and why it's pumping up snow making machines on days with fresh snow.

The idea, as always, is to get as many people to Whistler and to experience the mountains, the village, the nightlife, the family life and get blown away by it all.And ultimately, come back for more.