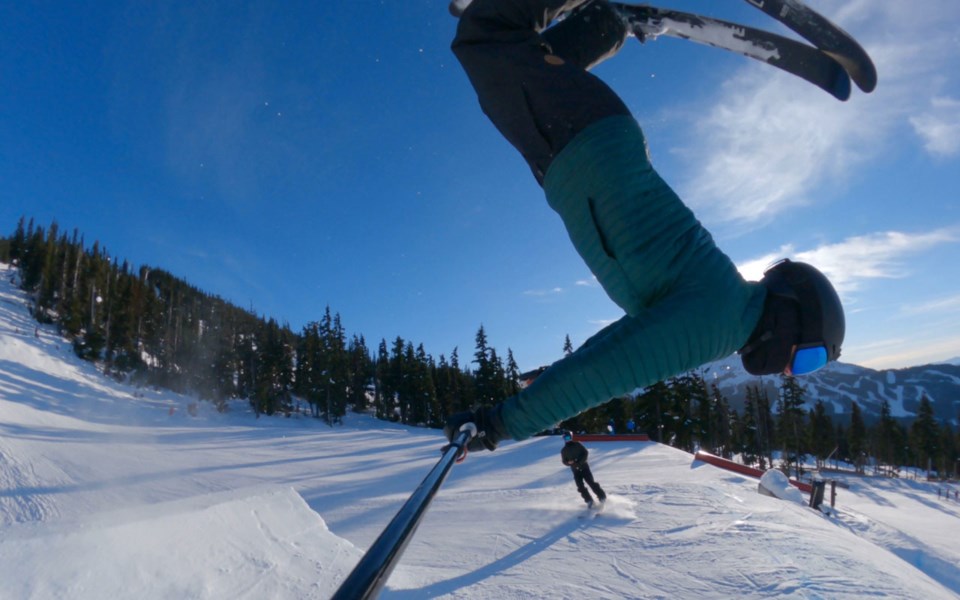 Evan Macalister in the midst of a flip, captured by his GoPro HERO9 Black. Photo submitted

Evan Macalister woke up on Tuesday morning, had breakfast, discovered he won $20,000 through the GoPro Million Dollar Challenge and headed out on his commute to work.

“I watched the video, saw my clip and was like, ‘Whoa, that’s pretty wild. I guess I’ll head off to work now,’” he says. “I was trying to process it myself the whole day.”

Earlier in the season, he purchased the newly released HERO9 Black, in part with the goal of entering the third year of the contest. GoPro launched the new product and then kicked off the challenge in September, encouraging people from around the world to share their best clips in 80 days.

The only parameter was it needed to be shot on a HERO9 Black.

For its part, GoPro is interested in seeing what customers can do with the new cameras, GoPro founder and CEO Nicholas Woodman said, in a release.

“It’s also our chance to give back to the GoPro community in a big way,” he says. “Our community powers our brand and we love celebrating their creativity with the Million Dollar Challenge video and the significant cash prizes that help them pursue their passions even further.”

Having grown up in Whistler, Macalister knew exactly what he wanted to do for his submission.

“Mine was taken of me skiing up on Whistler Blackcomb in the Terrain Park,” he says. “I was able to mount the GoPro camera to my pole and I went off the jump and did a backflip. What made it stand out was one of the new functions of the GoPro is this horizon-levelling feature which keeps the camera shooting at the same angle. When you flip, it doesn’t flip at all. So everything else flips instead.”

After a full day filming laps at the park, he went home and submitted three of the best shots. “On a follow-up email they wanted me to send everything I had from that day,” he says.

To that end, GoPro says it went through 29,000 submissions from over 125 countries—that’s 250 hours of videos to review. Then they picked 56 people to share a $1 million USD purse evenly.

What is Macalister going to do with his prize money? “There’s ideas running through my head, but I can’t really pinpoint anything at the moment,” he says.

The final video is comprised of split-second clips of everything from action sports like sky diving, skateboarding, waterskiing, biking, and surfing to everyday scenes like a jubilant little girl and a live-action painting of mountains.

“I watched it multiple times today,” Macalister says. “It’s so wild. I almost feel like my clip doesn’t stand up to some of the stuff in there. It’s unreal. Some of the angles and whatever they strap the GoPro to to get those shots, it’s otherworldly for sure.”