Whistler students get a firsthand look at French life 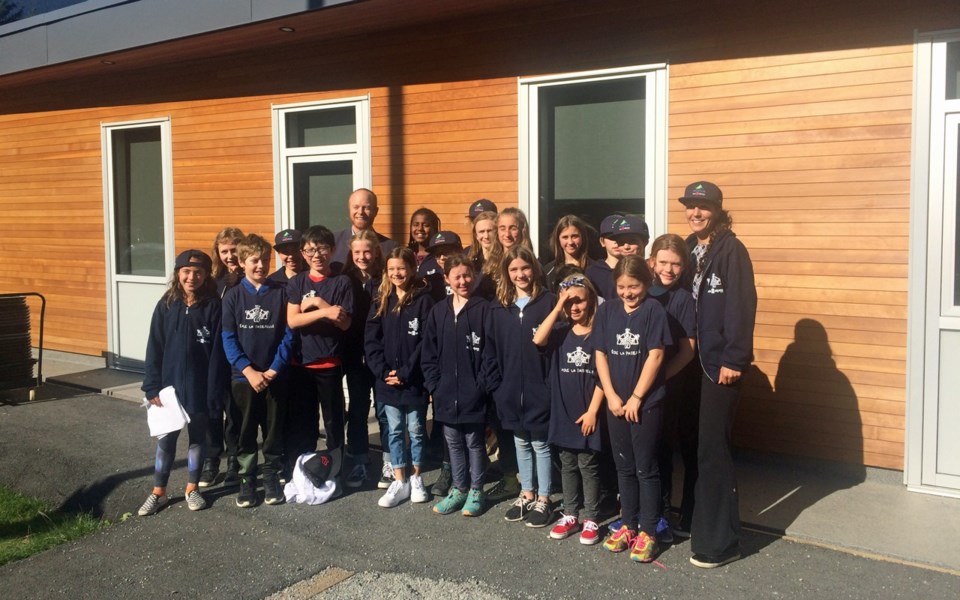 Students at L'École La Passerelle were overjoyed to share what they learned during their recent trip to Les Deux Alpes, France. Photo by Joel barde

for some hard-working École La Passerelle students, last school year was one to remember.

After a lot of fundraising and preparation, Madame Mireille Turcotte's class—a mix of Grade 5, 6 and 7 students—travelled to Les Deux Alpes, France, a resort town that has cultivated a close relationship with Whistler in recent years; the communities established a Friendship Pact in 2018.

As a way to reflect on their trip and share what they learned, participating students held a presentation at École La Passerelle on Friday, Oct. 11, with an audience that included parents and Whistler Mayor Jack Crompton.

Alternating between French and English, students shared some valuable suggestions for Whistler to follow as well as some light-hearted observations of French life.

As part of the trip, students visited a school and learned that French students are given half a day off every other Wednesday.

"I think it would be nice to do this in our schools—to give students the opportunity to do more sports after school in the afternoon," said one student, prompting a round of laughter from the audience.

The 10-day student trip took place in June and follows a trip to the resort that Whistler leaders made in July 2018. Then Whistler Mayor Nancy Wilhelm-Morden, Whistler Chamber of Commerce CEO Melissa Pace, and Whistler Off-Road Cycling Association President Craig Mackenzie, as well as Turcotte and others were all on that trip.

Les Deux Alpes is looking to grow as an all-seasons resort and sponsored the trip as a way to learn from Whistler's success.

Funding for the student trip came through fundraising, as well as sponsorship from Les Deux Alpes, the Resort Municipality of Whistler and the Whistler Community Foundation. Parents also paid $1,000 for their children to take part.

It was, by all accounts, an action-packed eight days in the community, with students doing a mix of hiking and cycling and educational activities, like visiting museums.

Following a ski day on a glacier, the students met with a glaciologist, who discussed the precarious nature of the region's glaciers and the steps that Les Deux Alpes is taking to preserve them.

"They take very good care of their glaciers," remarked Sixth Grade student Maïka Lennox-King, in an interview with Pique following the presentation.

At night, they "cover them with white sheets" to help protect them from the elements, she said.

Fellow student Céleste Ciebien said that there are big differences in terms of how Whistler and Les Deux Alpes look, with the Les Deux Alpes having very few trees "because they are so high in altitude."

"Also, the streets are very small and old," she said.

École La Passerelle students communicated with students in Les Deux Alpes in the year leading up to the trip, sending correspondence through snail mail.

And some got a bit of a shock when they met their pen pals.

"It was surprising, because, some of us, if we were girls, we thought we had girls [as pen pals], but some of us actually had boys—with different names," said Lennox-King.

"When we had meal time in the cafeteria, we are used to having 20 minutes," said Ciebien.

"So we would eat quickly, and then we would wait for like 45 minutes, just sitting there, because we didn't know that the lunch was an hour long.

"They'd be on their third bite, and we'd be like, 'something is wrong with this.'"

Turcotte said that, as an educator, the trip provided a great framework to organize the year around.

"For me, as a teacher, it was a unique year, because everything that I was teaching, they had a purpose for it," she said.

She also expressed gratitude for the help she received from organizers in Les Deux Alpes who made the trip happen, Cathy Sauvebois and Stefani Debout.

"I thought it was super well organized," she said.