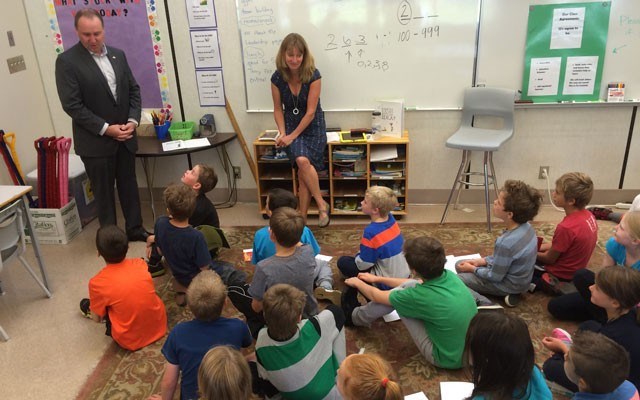 As the man in the suit stood in front of the school children at Myrtle Philip Elementary explaining his government position and the things for which he was responsible, one eight year old showed his critical thinking skills — a key component in the province's new curriculum — in connecting the dots.

"So you're the guy who was in charge of the strike last year?" the student asked, to laughter from the room.

Astute observations aside, new provincial education minister Mike Bernier could hardly be blamed for last year's labour dispute — he only just took over as minister on July 30.

When he assumed the file, it was with five years of labour peace to look forward to and a brand new curriculum set to roll out.

"It's exciting. There's so many positive changes coming about," Bernier said, shortly after his tour of Myrtle Philip.

The stop was part of a day-long tour throughout the district with local MLA Jordan Sturdy — other stops included Signal Hill Elementary in Pemberton and the Cultural Journeys and Learning Expeditions programs at Stawamus Elementary in Squamish.

"What's really exciting is how this district has embraced it already, in fact a number of years ago, and is really leading the whole province in education," Sturdy said.

"Minister Bernier is new at his job, but I think he was an inspired choice by the premier."

During his visit to Whistler, Bernier saw presentations from two students showcasing some of their recent work before sitting in on a Grade Four/Five critical thinking exercise.

Getting out into the province's schools is enlightening, he said.

"You need to get out, hands on, and really see all the successes that we have out there... what I've just witnessed was exactly what we're trying to accomplish," he said.

"It was great to see, and watching the kids, the smiles on their faces and the work that they're doing, it really hit home and it was great."

The new curriculum is being phased in over three years, starting this year with K to Grade 9.

The program for students in Grades 10 to 12 is still being drafted and will be introduced next year. The entire K-12 curriculum will be phased in by the 2017-18 school year.

"I think for parents what's really important to stress is we're still going to be focusing on the core competencies," Bernier said.

"Reading, writing, arithmetic, those are the foundational skills that every child needs, but what I just witnessed today, and what we're talking about, is every child learns differently. Every child wants to have the opportunity to have the same great experience through school, and what we're as a province really working towards is more the allowing the critical thinking, the communication skills."

Coral Dawn Tipton was one of a handful of parents on hand for the minister's visit.

"Overall, I'd say that there was a tremendous amount of energy and innovative excitement," she said, adding that she feels the new curriculum is responding to the excitement of teachers who want to educate in new ways.

"My overall impression is that there's a really good match up between what the school district wants and what the teachers are excited about, and how they want to deliver their teaching."

When asked about the fate of provincial exams, Bernier said the ministry is working with teachers on assessments.

"Any time you roll out a new curriculum, you need to be looking at how those assessments are going to be working," he said.

"Right now, we're still in communications through the ministry with the teachers federation and other stakeholders to make sure that the assessments match what we're teaching in the new curriculum."

"We know that we have some great teachers in the province," he said.

"The teachers themselves have helped put this curriculum together, and with that ownership and the communications that we have with the teachers and the school districts as well, I'm excited with how this is all unfolding."

He's also not concerned that high school students might be under prepared for university under the new curriculum.

"Actually I would say they are more prepared," he said. "We know that 80 per cent of the jobs in the next 10 years are going to require some form of post secondary education, which is why, through this K to 12 with this new curriculum, it's really focusing on are our kids ready for that? And making sure that they are."