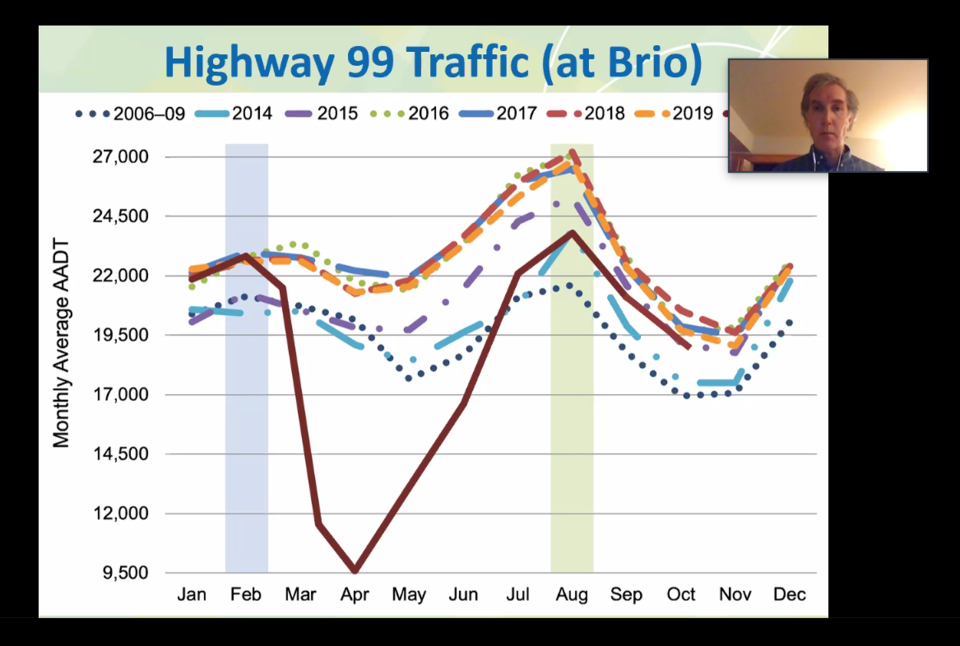 After dropping off in the spring, traffic levels in Whistler hit “near-normal” levels in October. Screenshot.

If rubber-tire visitors to Whistler were being COVID conscious from March to September, they certainly shed their anxiety in October—at least according to local traffic counters.

“Looking at it now, we are seeing near-normal levels of traffic,” said general manager of infrastructure James Hallisey at the Nov. 17 council meeting.

“I think the October numbers [at our Brio traffic counter] were within a few hundred cars of where we were in 2019, so interesting to see how that travel has rebounded.”

The pandemic implications of that traffic growth aside, Hallisey was on hand for the meeting alongside transportation demand management coordinator Emma DalSanto to present an update on Whistler’s Transportation Action Plan.

A previously planned increase to parking rates in Whistler’s day lots that was postponed due to the pandemic will be put into effect this winter.

Whistler Conference Centre and Whistler Public Library underground parking fees will also be increased $5 each (now $20 for the day and $70 for the month) on Dec. 1.

While parking revenues predictably took a dive as the town slowed to a crawl in March and April, parking volumes were still “significant” on some summer days, Hallisey said.

“It is interesting that despite a global pandemic going on, traffic to those two parking lots was still significant; we were still over 70-per-cent full on the days surveyed,” he said.

“And compared to many of the other indicators around town, this was actually pretty strong.”

Prior to the pandemic, transit ridership was growing stronger than in 2019, DalSanto said, but took a predictable dive during stay-at-home orders.

“It has bounced back, and we’re basically at about 50 per cent of where we were,” DalSanto said.

“One of the key things that we’re looking to do is to grow back our transit ridership and confidence in our transit system.”

Early-winter transit service kicked off on Nov. 21, with the return of the 4 Marketplace shuttle, 20x Cheakamus and 32 Emerald routes.

One area that needs continued focus is the management of parking at parks and trailheads, DalSanto added, noting that at some areas monitored, occupancy was above 85 per cent.

A pilot project launched this summer to shuttle visitors from parking lots to parks could provide some relief in that sense, she added.

“We’ve been talking about this, and we do think that with proper planning there could be something that could serve a certain part of the population,” DalSanto said.

“We have some ideas that we’ve been floating around for next summer, but we need more work on that.”

The Resort Municipality of Whistler is seeking four new community members to serve two-year terms on the TAG—read more at www.whistler.ca/municipal-gov/committees/transportation-advisory-group.