Business owners asked to define their neighbourhoods
Aug 1, 2013 3:02 AM By: Cathryn Atkinson 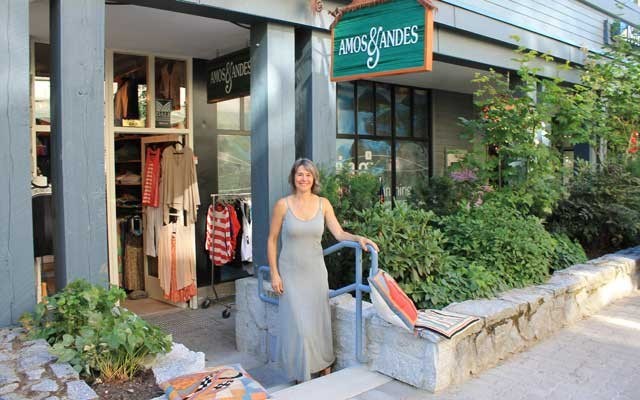 This resort may be beautiful, but there's always room for improvement. Sometimes it's as simple as trimming back a tree in order to make a store frontage more visible.

Or in Hilary Davison's case, putting in a set of stairs, adding a splash of paint and moving planters.

The owner of Amos and Andes, which sells high-end sweaters and tops from her small store on Village Gate Boulevard, has found that in the two weeks since unveiling the steps she has seen increases in foot traffic from visitors.

She said access was a problem because shoppers can be timid when having to navigate an unclear path to stores. She believes this has led to some shops going out of business.

"It's still early but is looks like it has made a huge difference. We were so excited to have the stairs," she said.

Davison, who owns the property, said she could instigate her own changes — "I am my own landlord, and I agreed with me" — but she still needed permission from the RMOW and two building stratas, including timeshare owners, to carry out the work. All-in-all, it took several years to sort out but appears to have been worth it.

Her discovery is something the Resort Municipality of Whistler is now exploring further with the help of business owners around the resort. Whistler Village 3.0 was initiated by the municipality in order to enhance the shopping, service and eating precincts for businesses and visitors alike by considering how making simple adjustments to promenade areas will increase traffic.

The second of five meetings, each looking at one part of the village, drew 40 food and beverage, retail and tourism business owners from The Village Stroll and Square and the Village Commons to discuss access, image, impressions and sociability at the Whistler Conference Centre on July 26.

The aim is to improve guest experience while enabling businesses to make the most of their locations and giving them a chance to work on improvements alongside their neighbours and officials.

"We know Whistler so well that we make assumptions that this place is easy to get around, but we have two millions visitors a year and most of them don't know it like we do," Kevin Damaskie, sustainability coordinator for the Resort Municipality of Whistler, told those who attended.

Craig Mackenzie with Sotheby's International Realty said he "must've helped hundreds of thousands of people in 30 years" get their bearings upon arriving at the resort.

Participants were asked to pick keywords that defined their precinct. The most strongly identified include "gateway," "Village Square," "dining" and "patios."

From these words an identity can be developed and promoted, Damaskie said.

Councillor John Grills said the meetings have shown businesses "that it wasn't just the municipality going to fix things for them. They could take ideas and work on them as a group."

He added: "What's coming out of each of the sessions is how we identify the area so that each of the guests finds their way around; a lot of ideas are coming out. I think it will be helpful for our planning department to then take what they are hearing (and) go back and refine the retail strategy they've been working on."

Mike Kirkegaard, the RMOW's manager of resort planning, said they had the ability to make an impact.

"We've been working on village enhancement for quite a number of years," he said. "This current process is unique in that we're looking at the village in terms of the neighbourhoods and inviting stakeholders to come together and talk about issues, be able to work together, understand and go out and visualize. They carry ideas for improvement in their minds and now they have this opportunity to tap into ideas and collective efforts."

Other meetings took in the views of participants from The Marketplace, Main Street and Whistler Olympic Plaza zone and Skiers Plaza and Mountain Square. Gatherings are planned for business owners in the Upper Village and Town Plaza.