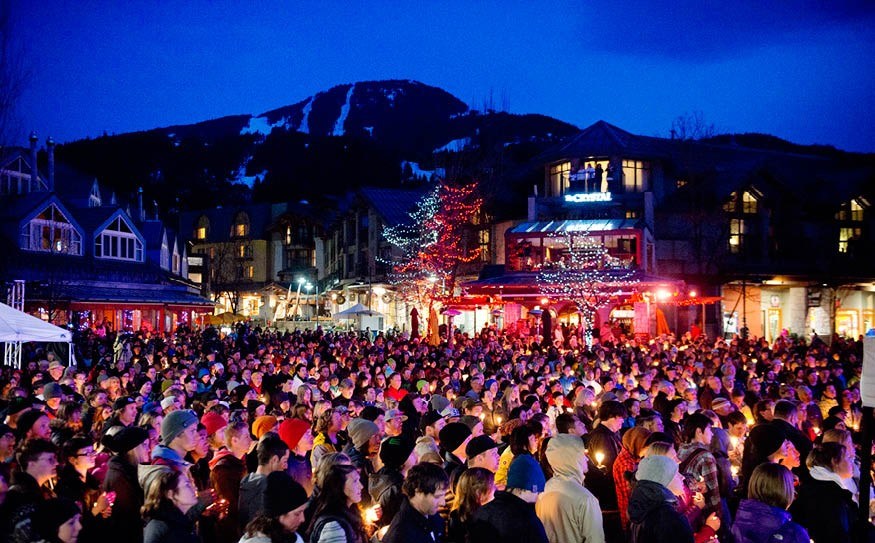 FOND FAREWELL: Close to a thousand people gathered in Whistler's Village Square to pay tribute to fallen freeskier Sarah Burke, 29, who died in January after a fall in a halfpipe in Utah. Photo by Bonny Makarewicz. bonmakphoto.com

Some came to mourn, others to celebrate a life that was almost too big, too extraordinary to be real - and one that ended far too soon.

But the celebration of life held on Tuesday night at Village Square for freeskier Sarah Burke was not about closure - nobody was saying goodbye. Instead Burke's story will live on as long as her friends and family members continue to tell it. Words splashed across the screen in Village Square said it best - "a light never goes out if it lights a thousand others."

Andrew Goatcher, a grade school friend of Burke's from Midland, Ontario who took the stage to share stories of their years together said: "Nothing will be the same without her, but everything is better because of her."

On Tuesday afternoon Burke's fellow skiers and family members held a memorial in the Blackcomb superpipe where she learned many of the tricks that made her an international star. Almost 200 attended that event, which included a three-helicopter flyby, and a speech and song by Sarah's sister Anna.

It was fitting, they felt, to celebrate Burke's life with noise rather than silence.

That was a theme carried on at the evening celebration, which wrapped up with raucous cheers, loud applause, wolf whistles and more as the hundreds gathered said their final good-byes - and a promise to dance and live life to the fullest in her memory.

Burke, 29, passed away on January 19, after sustaining a brain injury several days earlier during a halfpipe crash in Utah. A funeral was held afterwards, but family and friends had always planned a Whistler memorial near the end of the freeskiing season so her extended "ski family" could be there. The end of the season starts next week with the World Skiing Invitational/Association of Freeskiing Professionals Championships in Whistler.

The crowd spilled out of Village Square down the stroll and the patios were filled with well wishers, including a loud group of Sarah's fellow freeskiers on the patio of the Amsterdam pub who would occasionally start chanting "Sarah! Sarah!" It was likely the largest gathering in the square since the 2010 Winter Games.

The crowd included Burke's family members, her closest friends, her colleagues, kids who looked up to her, or were lucky enough to have had her for a coach, as well as hundreds more who didn't know her well, but followed her amazing career.

For more on this story pick up Pique on Thursday and go to www.piquenewsmagazine.com. For video scroll down.