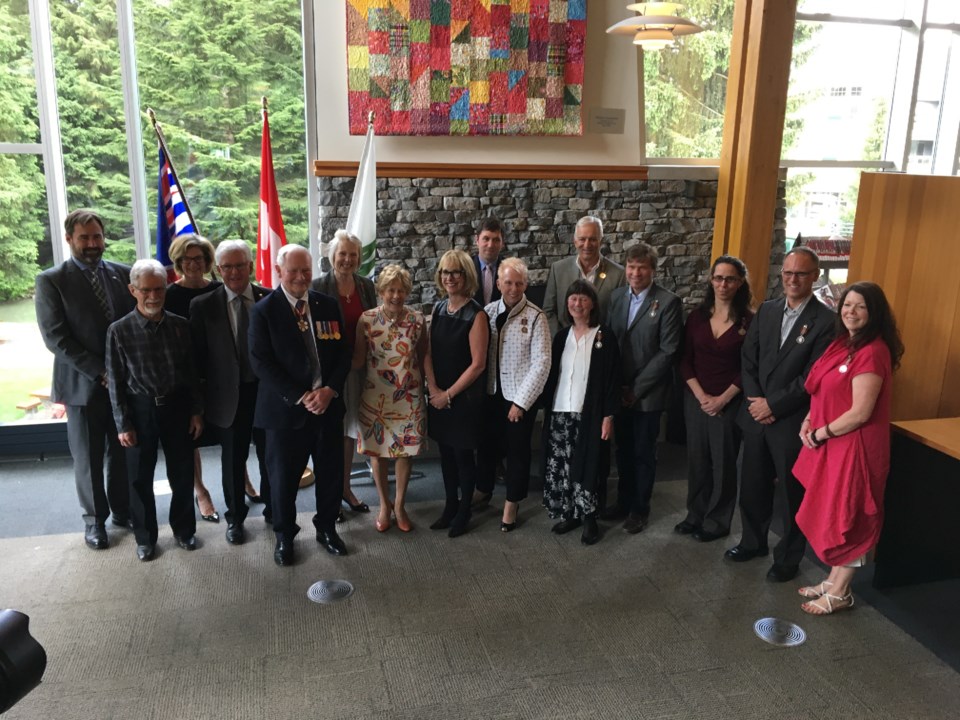 Governor General of Canada David Johnston was at the Whistler Public Library on Friday, June 2 to honour a dozen local citizens with the prestigious Sovereign's Medal for Volunteers.

The medal recognizes remarkable volunteer achievements of Canadians across the country.

"Your work changes your communities, our country, the world, and you do it simply because it's the right thing to do — because you've found the true meaning of community," Johnston said in his opening remarks, before quoting Greek philosopher Aristotle.

"He said 'What is the essence of life? To serve others and to do good.' Well you volunteers have served others and you certainly have done good, and in doing so you've improved the lives of those around you, and you've inspired others to follow your example."

The recipients, in order of acceptance:

Jennifer Erickson — A volunteer instructor with the Whistler Adaptive Sports Program since 2002, teaching skiers with disabilities and developing material for teaching seminars. Has also served four years on WASP's board of directors.

Jim Moodie — One of the designers of the original Whistler Village; helped create the Whistler Athlete's Village for the 2010 Winter Olympics; helped establish the Audain Art Museum and serves as chair of its board of trustees and as vice-chair of the museum's foundation.

Jennifer Patterson — Member of the Whistler Valley Quilter's Guild since 1994; volunteer with the local chapter of the Girl Guides of Canada for more than a decade; actively involved with the Scouts movement and the Whistler Skating Club.

Jacqui Tyler — Active volunteer with several organizations for more than three decades, including the Kelty Dennehy Foundation and Whistler Adaptive Sports; organized several annual fundraising events for the Festival of Lights and a dedicated supporter of the Whistler Music Festival.

Dave Clark — Co-founded the Whistler Friends Society in 2002, a non-profit dedicated to raising awareness and funds for Crohn's and Colitis Canada and the BC Children's Hospital Foundation, helping raise more than half a million dollars.

Bob Brett — Helped establish the Whistler Naturalists Society in 1999 and continues to serve on its board of directors; launched Whistler's annual BioBlitz program and Fungus Among Us Mushroom Festival.

Gord Annand — Has served with the Whistler Public Library for 12 years as a trustee and as chair of its board of directors; led a successful fundraising campaign to preserve the library's capital reserve; dedicated supporter of the Whistler Blackcomb Foundation.

For more information about the Sovereign's Medal for Volunteers or to nominate someone visit www.caring.gg.ca.