Whistler could potentially house handful from group currently detained in Australia
Aug 8, 2019 12:00 AM By: Brandon Barrett 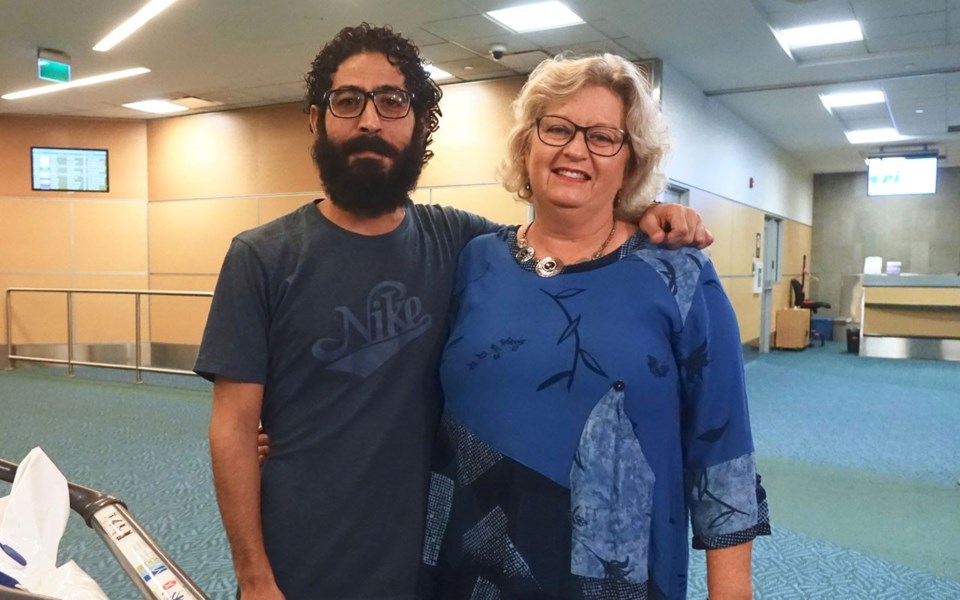 REFUGEE SUPPORT Former refugee Hassan Al Kontar and Whistlerite Laurie Cooper have joined with two B.C. organizations on an initiative to bring roughly 200 refugees to Canada that have been detained for years in Australia. Photo by Jen Grover

You could excuse Hassan Al Kontar for wanting to take some time to himself after the Syrian refugee spent seven months languishing in a Malaysian airport terminal last year. But with the platform he's gained as one of the most visible figures of the global refugee crisis, the 38-year-old is committed to giving a voice to those who have none.

"It's a matter of obligation to me," Al Kontar said of his refugee advocacy work since being granted asylum in Canada last November. "I still receive hundreds of messages from individuals all across the world: homeless people, powerless people asking for help. I can't help on an individual basis, but when it comes to groups, like Operation Not Forgotten, I can be really helpful."

Al Kontar has teamed up with Whistlerite Laurie Cooper, who led the push to bring the Syrian to Canada, along with non-profit organizations Canada Caring Society and MOSAIC to sponsor roughly 200 "forgotten" refugees currently detained on the Australian islands of Nauru and Manus. (They are part of a larger group of close to 900 refugees detained on the islands, 650 of which are eligible for asylum in the U.S.)

In 2013, Australia's then-coalition government toughened its asylum laws, which gave the military the power to intercept and bar migrant boats from entering the country. In the run-up to May's national election, there was hope among the detained refugees and advocates that a Labor Party victory could lead to a loosening of Australia's asylum policy. But after a surprise win by the Liberal-National coalition, the hope for resettlement began to fade.

"About three days after the election, I started hearing reports through my Facebook friends, who are refugee advocates working from Australia, that the refugees were in such despair after the election results that they were self-harming and attempting suicide," Cooper relayed. "Within three days there had been nine suicide attempts, and now I think there have been more than 120 suicide attempts. They've given up all hope."

Discussing the issue with her daughter, Cooper, who has co-sponsored roughly 50 refugees to come to Canada, "flippantly said, 'Maybe I should help them." By the following morning, it was decided. "'Goddamn it,'" she thought to herself, "I should just sponsor them all to come to Canada.'"

If successful, the refugees would arrive through Ottawa's private sponsorship program, which requires the group to raise the necessary funds to support them during their first year in Canada. Between $3.3 million and $4.1 million would need to be raised, of which approximately $200,000 has already come in from Australia.

"There are really, really good people in Australia who want to help the refugees and they are devastated they can't bring the refugees to Australia," Cooper added.

Cooper said there is a potential to bring a handful of refugees—who primarily hail from Iran, Sri Lanka and Afghanistan, she noted—to Whistler, where 13 Syrian and Afghani refugees have already settled, including Al Kontar, who moved to Vancouver in May. Cooper also recently approached the Rotary Club of Whistler about leveraging its local and national network for potential funds, as well as assist in the refugees' eventual settlement here. (Five individuals are required to commit to supporting each privately sponsored refugee.)

Although Syrian refugees like Al Kontar have garnered much of the West's media attention, he believes it's essential the stories of the 25.9 million refugees around the world are shared—and hopefully viewed in a new light.

"People always hear about us from the news, but never from us directly," he said. "That's why, in my opinion, we need to humanize the issue, to let them hear directly from us and to show them that, yes, we may need the help, but what we need more is an opportunity to help ourselves."

To learn more about Operation Not Forgotten, visit canadacaring.org.