Whistler woman leading push to get Syrian man, stranded in airport, to Canada 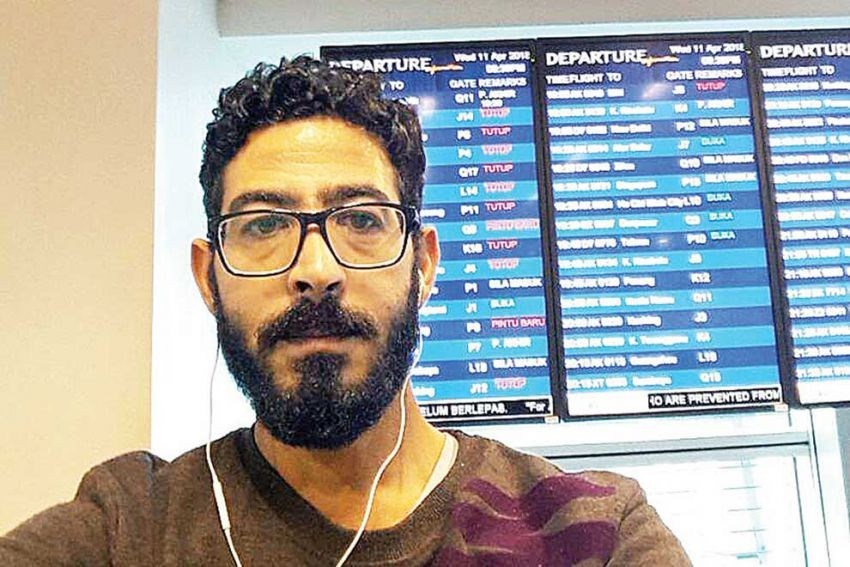 Syrian refugee Hassan Al Kantor, in the Kuala Lumpur airport where he has been stranded for nearly two months. Twitter

Syrian refugee Hassan Al Kontar has been stranded in a Malaysian airport for 51 days—and he’s counting on the efforts of a group led by a Whistler woman to bring him to Canada.

Al Kontar, 36, has been living in the Kuala Lumpur International Airport since March, when he was barred from boarding a Turkish Airlines flight.

Originally from Dame, Syria, Al Kontar left the country in 2006 to work in the United Arab Emirates as an insurance marketing manager. After the Syrian Civil War broke out in 2011, Al Kontar lost his work permit. He eventually travelled to Malaysia on a three-month work permit, but overstayed his visa, meaning that he can’t re-enter the country for five years. He was also denied entry to Cambodia for not having enough cash onhand. If he returns to war-torn Syria, he faces certain imprisonment—or worse—for failing to complete his mandatory military service.

Stuck in limbo, Al Kontor has spent nearly two months straight in a stark arrival terminal—an ordeal he has documented on Twitter with a healthy dose of humour—subsisting on airline meals and the generosity of strangers.

One of those strangers is Laurie Cooper, a former journalist and communications specialist who calls Whistler home. Cooper, who was inspired to get involved with the refugee crisis in 2015 when the image of a three-year-old Syrian boy who had drowned in the Mediterranean Sea made global headlines, was tipped off to Al Kantor’s predicament earlier this month by another Syrian refugee and sprung into action.

A founder of Canada Caring, a non-profit dedicated to assisting volunteers find placement in refugee camps, Cooper rallied her extensive international network to help Al Kantor. After word of Cooper’s efforts got out, she started receiving offers of support from around the world. Good Samaritans brought Al Kantor much-needed food, clothing, and a new cellphone—his only link to the outside world—on their way through the airport.

“Hassan was just telling me that eight people have come through bringing him nutrient-dense things like protein bars and dried fruits, just to supplement his diet a bit,” said Cooper, who added that, “as a mom,” she was worried that Al Kantor was getting too skinny on his airport diet.

Countless others have donated to a crowdfunding campaign aimed at raising the minimum amount of $13,000 required for private groups to sponsor a refugee. (At press time, they had raised over $15,000.)

“We wanted to raise that much so that if he can come to Canada, he’s got the required funds. If he can’t come to Canada, then he will use that money to settle wherever he can,” Cooper explained, adding that she has already fielded two potential job offers for Al Kantor in Whistler.

This week, Cooper wrote a letter to federal immigration minister Ahmed Hussen to expedite a temporary resident permit to allow Al Kantor to come to Canada while his sponsorship application is processed.

Al Kantor reacted to the news in a video he posted Friday, April 27 to his Twitter account, @Kantor81.

"When the rest of the world was either watching or just ignoring (my situation), or just making me their scoop, a great country, a real humanitarian society … decided to stand up to show the rest of the world how to behave when there’s a human desperately in need of help, and to give an example, yet again, for other governments to look to in the future. Canada is what I’m speaking about,” he said.

“That’s why I need you, I need you all, I need your help to send support to Mr. Ahmed Hussen, so when they wake up in the morning, they will find their mailbox full of supporting messages.”

“If he makes it here (to Whistler), we’ll have a big, local party,” Cooper added.

To donate to the crowdfunding campaign, visit https://ca.gofundme.com/help-hassan-fly-to-freedom.

For more on this story, pick up next week's edition of Pique.