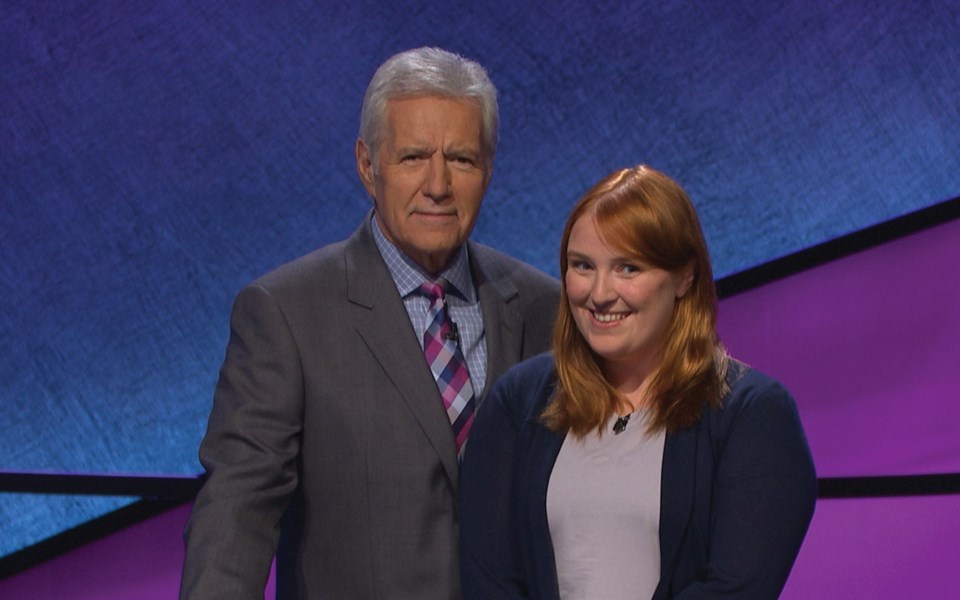 THIS IS JEOPARDY! Whistler's Hannah McIntyre poses with Jeopardy! host Alex Trebek while filming an appearance on the show. Photo submitted

Watching seminal quiz show Jeopardy! from the comfort of your easy chair, one can start to feel like a savant of sorts.

With no competitors, no buzzer and no consequences, the answers (right or wrong, doesn't matter) can be blurted with impunity.

But under the bright studio lights of Los Angeles, where the show is filmed, the dynamic changes.

"The buzzer had a much bigger impact on the game than I expected going in," says Whistler's Hannah McIntyre, who appeared on the show on Oct. 24 and 25. "It's one thing for me to know all of the answers to all of the questions on the board, but it's entirely another when everybody knows all of the answers, and it just becomes a race to the buzzer.

"Basically if you don't know the answer by the time Alex (Trebek, longtime Jeopardy! host) has finished talking, you're out, because somebody else has already buzzed in on probably 90 per cent of the clues up there."

In her first appearance on Oct. 24, McIntyre posted a come-from-behind victory, knocking off three-day champion Erik Agard in the process.

"It was an absolutely amazing experience," she said. "Absolutely. I mean, every single part of it was just amazing."

McIntyre was on hand for the filming of five episodes, meaning she got to watch Agard compete (and win) in two episodes before taking the stage herself—a fact that didn't help her pre-show jitters.

"Erik was so good ... I was sitting there watching him going, 'Oh my God, this guy is so good, I hope somebody else beats him because I don't want to have to play him,'" she said with a laugh.

Once on stage, McIntyre said the nerves were numbed somewhat by the frantic pace of the action—but they didn't dissipate entirely.

"I remember at one point, halfway through Double Jeopardy in that first game when somebody else got a Daily Double, and that's basically the only time you have to actually sit there and think about anything, because the rest of the time it's just go, go, go," she said.

McIntyre prevailed over the nerves in that first appearance, posting a first-place total of $20,200 to unseat Agard, but fell short in defending her title the following episode.

Even so, she said she still walked away with a cool $21,200 in total winnings (before taxes)—money she plans to use to travel.

A self-published author by trade (find her work on Amazon under the pen name Samantha Silver), McIntyre attributes her trivia smarts to reading.

"I think that's where most of it comes from," she said. "I just read about everything, and eventually you just kind of pick up on facts."

While she's been watching Jeopardy! for about 10 years now, becoming a contestant was never something McIntyre aspired to.

It started with taking the show's online test for fun, which eventually got her an invite for an in-person audition.

"And then I found out in July that I was actually going to go on the show, and then it became very real. Then I started going, 'Oh God, there's a lot I have to study!'"

In preparing, McIntyre said she picked categories she knew the least about, like U.S. history or the Bible, as focus areas for study.

The cram session paid off, and McIntyre's come-from-behind Jeopardy! upset will likely be a moment she never forgets.

"I was so surprised. I wasn't expecting it at all," she said. "It was absolutely incredibly in every way."

McIntyre's Jeopardy! appearances can be viewed on www.dailymotion.com.