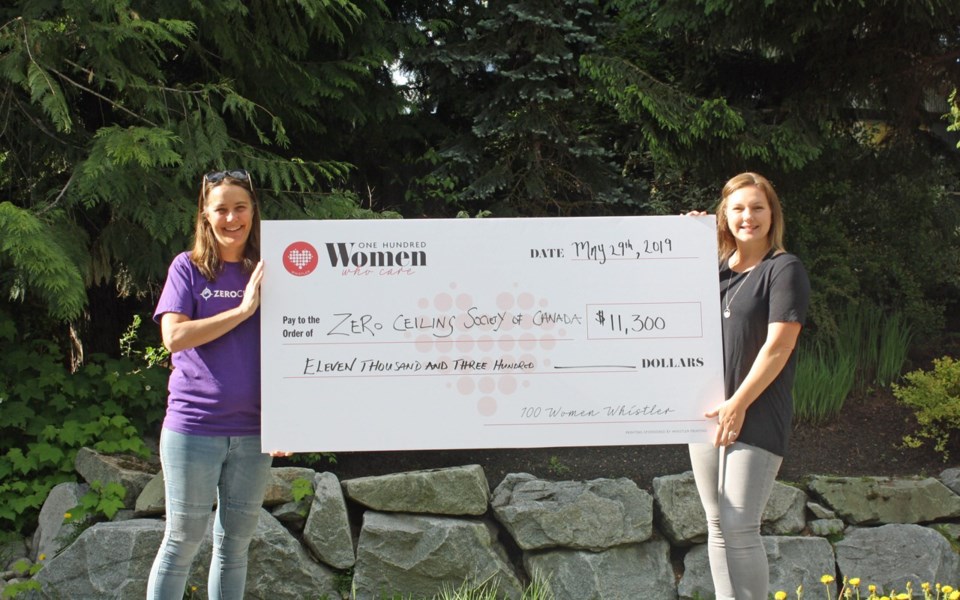 The newly formed Whistler chapter of 100 Women Who Care met for the first time on May 29 at 7 p.m. in a ballroom of the Fairmont Chateau hotel. By 8 p.m., the group had already handed over a cheque for more than $11,000 to local charity Zero Ceiling.

Founded by local Ashlie Girvan, 100 Women Whistler relies on a fundraising approach that is as simple as it is efficient: Every quarter, each of the group's members—which now counts 117 local women—nominate a Sea to Sky charity they feel is worth donating to. Three organizations are randomly selected from that list and then asked to give a five-minute presentation to the group. The women then vote for the charity they feel is most deserving, with each donating $100 to the cause.

"It's a one-hour commitment of your time, and $100 every quarter. It's the simplicity of it," Girvin said.

Girvin got the idea for a Whistler chapter after learning of the 100 Who Care Alliance from a friend in Vancouver. Started in 2006 by a Michigan woman who was looking for a quick and efficient way to raise money for local charities, 100 Women Who Care now counts more than 850 chapters worldwide, including offshoots such as 100 People Who Care, 100 Men Who Care and 100 Kids Who Care. There is also a 100 Women Squamish chapter.

"We're really lucky where we live that we are surrounded by so many strong and smart women," Girvin said. "It's not only a fundraising event but a networking event where strong women can come and be in a room with likeminded women."

"[A hundred dollars] is not an outrageous ask of any one individual but it makes a really big impact," she said.

The $11,300 Zero Ceiling received is enough to support one of its Work 2 Live program participants for more than six months. The program houses up to eight youth at a time, who spend a year in Whistler as a way to build a self-supported life.

The local chapter now has its sights set on launching 100 Kids Whistler, with its first meeting set for Sept. 26. The concept is identical, except kids are asked to donate $10 every quarter, instead of $100.