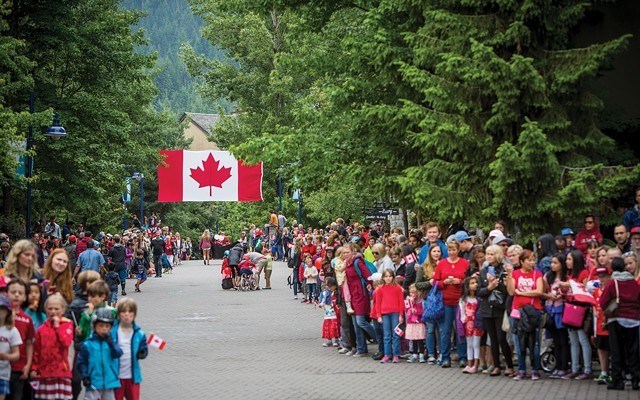 Whistler's annual Canada Day parade usually means a mass gathering. Due to the COVID-19 pandemic, that won't be the case in 2020. FILE PHOTO BY JUSTA JESKOVA/ TOURISM WHISTLER

Amid the ongoing COVID-19 pandemic, Whistler's Canada Day celebrations will look a lot different this year.

The usual parade, street entertainment and evening concert will not happen this summer, according to a release.

That said, "Celebration is in Whistler's DNA, and even though much is out of the ordinary this year, an exciting festive day is being planned for the nation's birthday party," staff explained.

While concrete details of what, exactly, that celebration will entail have yet to be released, RMOW staff said community safety will remain the central focus of the day's festivities.

Whistler's 2020 Canada Day celebrations will also be "an opportunity to showcase Whistler's athleticism, creativity and passion for mountain culture and the nature that surrounds us," the release continued. While many elements of the celebration will take place virtually, the RMOW is planning for "pop-up animation" to be dispersed throughout the village, as well as in local parks and some neighbourhoods.

"I always look forward to Canada Day, and this year I am especially excited to see our community come together to celebrate in a fresh, new way," said Mayor Jack Crompton in the release.

"While many elements of the day will be different than previous Canada Day celebrations, the spirit of the day will be inspiring! Though we may be two metres apart, let's celebrate Whistler and Canada's perseverance and resilience."

Meanwhile, the RMOW also announced that its annual Whistler Presents: Outdoor Concerts Series will not take place in Whistler Olympic Plaza this year.

The municipality is encouraging residents to "Stay tuned for a uniquely Whistler way to share our passion for music, as programming is re-imagined for this year."