Whistlerites are invited to the municipality's budget open house, set for Nov. 12 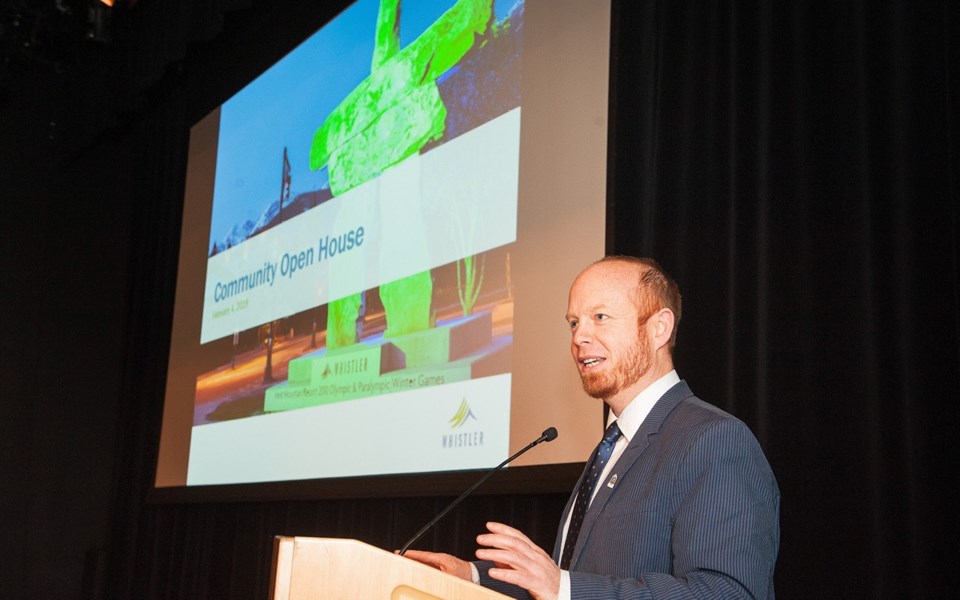 Whistler Mayor Jack Crompton speaks at last year's budget open house. This year's open house has been bumped up by three months to Nov. 12. File photo by David Buzzard/courtesy of the RMOW

Whistlerites will get their first look at the municipal budget a little bit earlier than usual this year.

Attendees will learn about proposed projects and tax increases, as well as have an opportunity to ask questions of council and staff.

The goal in moving the open house forward three months was to have the budget prepared as early in the fiscal year as possible, said Mayor Jack Crompton.

"It allows decisions that are made early in the year to be informed by the budget process, so it gives council a good sense for the projects that we'll be seeing throughout the future fiscal year. In my opinion, the earlier we understand the budget, the better organized we can be as a municipality."

Last year's budget included a 2.9-per-cent property tax increase, two-per-cent increases to sewer parcel and water fees, and a 3.6-per-cent increase to solid waste user fees, as well as a five-year proposed projects list that tallied 176 projects worth $42.6 million (including $5.3 million carried over from 2018).

"I hope our community comes out in force and helps us understand the values that they have as our municipality moves forward," Crompton said.

Not satisfied with what it has seen so far, the Resort Municipality of Whistler (RMOW) is broadening its search for a new chief administrative officer.

The RMOW has brought on recruitment firm PFM Executive Search (at a cost of $60,000) to expand the net.

"I can't comment on what is happening in the current process but certainly we want to find the ideal candidate for this very important position, and council felt it was a good time to broaden the pool and ensure that we take the time we need to find the right candidate."

PFM is a search firm that operates across Canada "with significant experience in municipal government," Crompton said.

While the RMOW is hoping to fill the position as soon as possible, "it can take months" recruiting a position like this, he added.

On July 25, the RMOW announced that current CAO Mike Furey will take on the newly created role of chief of strategic policy and partnerships.

The role will begin when the new CAO is in place and end in early 2021, lasting just over a year.

Six months into fiscal 2019, overall operating revenues were at 76 per cent of annual budgeted amounts, while expenditures were at 49 per cent (compared to 82 and 49 per cent at the same point in fiscal 2018, respectively), according to the RMOW's Q2 financial report presented to council on Oct. 8.

Permits and fees are being affected by "some good news, some bad news," said director of finance Carlee Price in a presentation to council.

"Parking continues to be a source of strength for the revenue account, [while] permits, with the downturn in the economy ... are being negatively affected to a greater extent than parking was positive," Price said, adding that total revenue across all accounts was up $3 million year over year.

Total project spending at the end of Q2 was at 17 per cent of total budgeted amounts (compared to 16.5 per cent—the average over the last five years).

"We tend not to spend 100-per-cent of the project budgets in any given year, and the spending does tend to be lumpy with 2Q, 3Q and to a lesser extent 4Q being the biggest spending periods, so this again is quite normal," Price said, adding that substantial project completions in the second quarter included the Cheakamus Crossing light replacement and building asset replacement.

"We did also receive the results from several important tenders in the second quarter—cardio room, GFL compost, sewer lift and paving," Price said.

"Together these four projects came within about $900,000 of their planned budget amounts, which is good news."

Nine members of the Whistler Fire Rescue Service (WFRS) were recognized at the Oct. 8 council meeting.

Whistler is "incredibly grateful" for the work of the WFRS, Crompton said.

"Our firefighters are committed to promoting fire and life safety throughout the resort community, and when needed they are there for our community quickly, effectively, moving into action to mitigate dangers when they occur," he said.

"The presentation of these awards provides a moment to reflect and acknowledge all of WFRS. On behalf of council and on behalf of the RMOW, we thank all members of the WFRS for their professionalism, courage and service to our community."

Meanwhile, WFRS Chief John McKearney was recently elected to a two-year term on the Canadian Association of Fire Chiefs' (CAFC) six-member board of directors.

"As a trusted advisor to our federal government on public and firefighter safety issues, the CAFC works with its national advisory council to bring municipal [and] provincial fire service issues to the federal level," Crompton said.

"Congratulations Chief McKearney—I'm proud that Whistler is represented by you on this prestigious and important council."