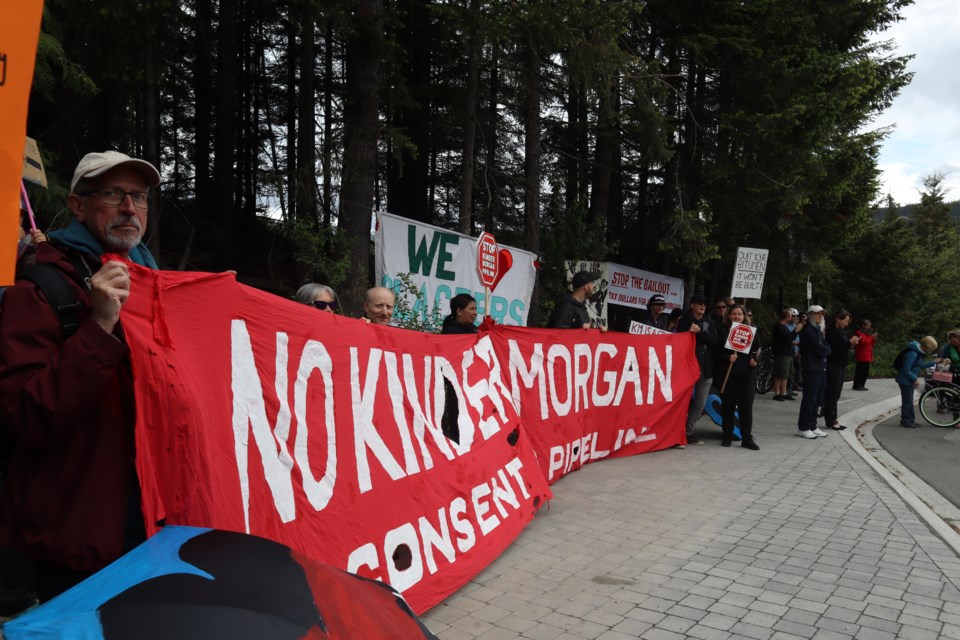 Protesters expressed their opposition to the Kinder Morgan pipeline outside the SLCC on Saturday. Megan Lalonde

Over 40 protesters gathered in front of the Squamish Lil’wat Cultural Centre (SLCC) on Saturday afternoon, hoping to gain the attention of federal Finance Minister Bill Morneau while he was in town for a three-day meeting of G7 finance ministers.

The group brought out their pots, pans, whistles, drums, and signs for a noisy demonstration to protest the federal government’s Trans Mountain pipeline project. Prime Minister Justin Trudeau announced the government’s plans to bail out the Kinder Morgan project by spending $4.5 billion to purchase it and take over the $7.4 billion expansion project earlier this week.

“Taxpayers are shocked. It seems like just a headlong rush to put a huge amount of money into a project that we know nothing about—there’s been no debate in parliament. How can they go ahead and give this huge amount of public money to a project that’s a step backwards?” said Whistler local Angela Mellor, who organized the demonstration.

Although a final press conference originally scheduled for Saturday afternoon at the SLCC—the same time as the protest—was seemingly shifted to earlier in the day, demonstrators said Morneau nonetheless got the message.

Set up across from the entrance to the Fairmont Chateau Whistler, residents carried banners clearly displaying messages like, “No Kinder Morgan. No consent, no pipeline,” “Stop the bailout,” and “No more tankers.”

The timing of the G7 finance meeting—merely days after the government’s controversial pipeline announcement—as well as its theme, “Investing in growth that works for everyone,” was “super ironic,” said Mellor.

That led concerned locals to feel “like this was an opportunity we couldn’t pass up,” explained protester Pina Belpario.

“I felt like we needed to do something to let Morneau know that we’re not happy with their decision to bail out Kinder Morgan… As a taxpayer, I have a problem with my money going there, and then there’s the environmental issues as well, that compounded, is just—we had to do something,” said Belpario. “I didn’t want him to be here and then go away without having heard from us.”

For Lil’wat First Nation Member Archie Peters, the visit was a long-awaited opportunity to voice his frustrations with the government.

The government’s decision making “takes away our land, it takes away our rights, it takes away the minerals and oils out of our land, gives it to the Queen’s bank and leaves us to starve on our lands and not allow us to do the things that we want to do,” Peters expressed. “I do not want them to build any more pipelines.”

Longtime local Rob Neilson, who was a snowboard instructor on Whistler Blackcomb with Canada’s now-Prime Minister Trudeau in the ‘90s, said he showed up to the protest because he’s disappointed with the decisions his former colleague’s government is making.

“I thought he would stand up behind all of this like, ‘we don’t want any of that’… now, he’s running our country and (it seems like) he feels that he’s tied up and backed into a corner where he can’t change anything.” Neilson said. “Simply just say no.”

While some expected a crowd to make the trip up from Vancouver, the group was made up of “95 per cent locals,” estimated one attendee.