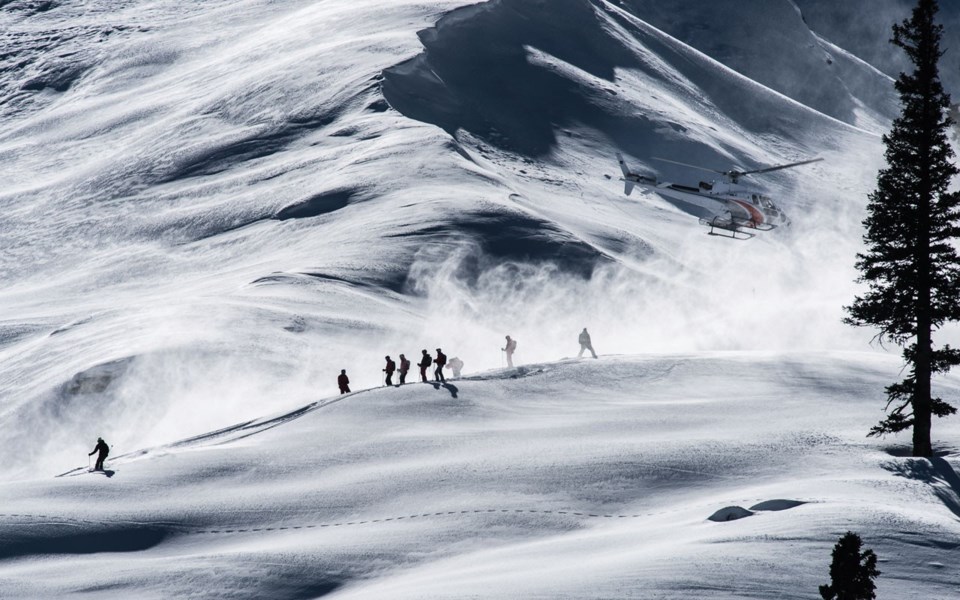 Unless you're a comedian, cracking jokes doesn't often lead to a career opportunity complete with some incredible international travel.

While arranging the sale of four snowmobiles and other equipment to locally based company Absolute Experiences for a pioneering ski expedition in the Himalayas near Shogran, Pakistan, Beattie made an off-hand comment about coming along.

"I sold them some of our used gear and all serviced up and ready to go. I made a joke to him, 'When do we leave?'" Beattie recalled. "[There were] a few comments of 'Can you? Could you? Would you?' and it came down to talking to my family, talking to my boss and trying to figure out if I could pull it off."

Beattie was brought on as an activity coordinator, one of 10 people hired from Whistler, but found himself completing more logistics and transportation work as part of the 60-guest trip, which ran from Feb. 15 to 23.

Absolute co-owner Ben Thomas explained that he and business partner Brice Lequertier, who also served as the lead heli-ski guide, organized the trip with Nisar Malik of Walkabout Films. Lequertier had guided Malik in expeditions in Chile in 2015 and 2017.

Thomas was thrilled with how the trip went.

"[We were] skiing in the Himalayas, skiing first descents nobody's ever heli-skied, ever. In fact, nobody's ever set foot, let alone skied, in the places that we were," said Thomas, who also owns VIP Mountain Holidays. "It's pretty remote and it's not that easy just to turn up and go skiing."

While the skiing was excellent—the choppers, provided by the military, were landing at 4,400 metres and the clients were skiing 1,500-m verticals surrounded by 8,000-metre peaks—there were certainly risks associated with the adventure.

"We were choosing the terrain carefully. It wasn't about bagging steep first descents. It was about safe and cruisy heli-skiing, and there's a lot of everything to choose from," Thomas said.

While Beattie didn't get the chance to go skiing himself, he heard from some of the clients that the penultimate day on the slopes—immediately after a storm—provided an all-time experience.

"These people have skied all over Europe and all over the place, so they just hit it with a really big day," he said.

Whistler Golf Club sales director Ro Davies also took part in the trip, serving as the concierge. He described bluebird, spring conditions, though the weather could change quickly, with Davies saying seeing the clouds rolling in was a sight to behold. In the potentially dangerous terrain, he credited the on-mountain staff for its bang-on decision making.

"The degree of safety and precaution and care taken on decision making and around entering that environment is really, really elevated. Taking the time and not going when it wasn't time to go was the right decision," said Davies, who has known Thomas for several years and has worked with him before.

Heavy-snow days made heli-skiing prohibitive on a couple of the days, though Davies noted that on those days, the group hopped on the snowmobiles and did smaller laps in a nearer range.

In advance of the trip, Absolute ensured that a local lodge, previously only used in the summer, was suitable for winter hospitality. That included creating a lounge with ping pong, darts and other games, while professional photographers along for the sojourn created nightly slideshows of the day's excitement.

Other infrastructure included Absolute creating a high camp a couple of kilometres from the main lodge with "geodomes"—essentially igloo-shaped structures with clear tenting—complete with blankets and fondues made from cheeses brought along from Switzerland and France. While Absolute employed a western chef, each meal also included a Pakistani buffet, as local chefs even utilized a tandoori oven to bake bread.

Non-ski activities included enjoying a market day in nearby Balakot, hitting biodegradable golf balls off of nearby peaks, and following a torch-lit path on horseback up to a campfire.

Among the surprise visitors were former English cricket captain David Gower, who participated in matches with guests out in the snow.

Though there were big names in attendance, Thomas said everyone was on a first-name basis.

"You wouldn't have had a clue that some of these people were heads of major companies, blue bloods of England. There was a lot of people from all over the world and they were all amazing, really, really fun to hang out with," he said.

The Whistlerites also appreciated the locals they crossed paths with as part of the expedition. Beattie worked directly with the Shimshali people (who he described as Pakistan's equivalent to Sherpas) to build camp and complete other logistical tasks.

"They were magnificent. Absolutely happy people, strong as oxen," he said. "[They are] very, very humble folk. If you or I had climbed five 8,000-metre peaks, we'd be legends here, whereas these guys, it was like it was nothing."

Davies said that he hopes the trip helps the world see some of Pakistan's positive aspects, describing a "beautiful, caring culture," in the country.

"When you get on the ground, there wasn't a single Pakistani person who wasn't the most genuine, welcoming, kind [person]," he said. "I couldn't walk around without getting offered tea, food, handshakes, 'Welcome to our country.'"

Thomas hopes to open up a commercial ski operation within the next two years and has had discussions with high levels of the Pakistani government. Chief of Army Staff General Qamar Javed Bajwa joined the group for part of the trip, while Prime Minister Imran Khan was supposed to visit, but had to cancel because of poor weather.