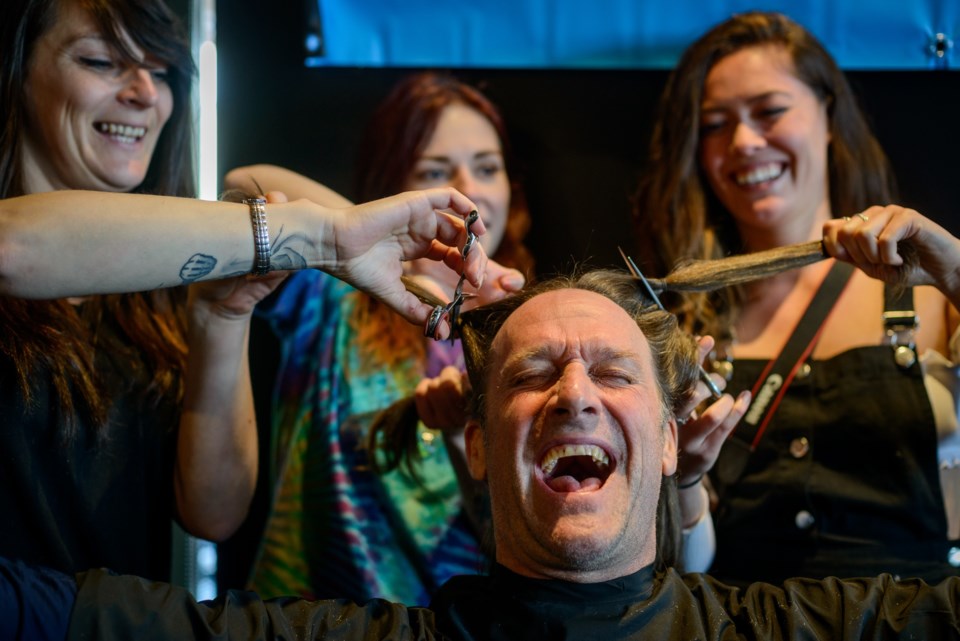 Dan Dennis prepares to lose his locks in support of children with cancer. Photo by Robert Shaer

Going into this year's Balding for Dollars fundraiser, organizer Dave Clark had one goal: to raise $15,000 for kids with cancer at BC Children's Hospital.

The only problem with that goal was that the event reached it before a single head was shaved. Instead, thanks to last minute attendees, pledges, cash donations, and a silent auction organized by the Crystal Lodge, the amount of funds raised this year climbed to $26,100.

"The place was packed," Clark said, adding that, "It might've been the first time where we actually hit our goal ahead of the event starting. It was just before-maybe an hour or two before-that we slipped through the $15,000 mark.

That brings the total amount raised by Balding for Dollars to $320,000 since 2002, when Clark founded Whistler Friends, a community health and welfare society, along with his wife, Wendy. Every cent of that total has gone to augmenting the lives of kids and families dealing with pediatric cancer at the Vancouver hospital, as well as to funding pediatric cancer research.

About 15 participants-women and youngsters included-showed up to the GLC on Saturday afternoon to have their heads shaved, courtesy of, as always, Blackcomb Barber Shoppe, while the Hairfarmers were on hand to provide the musical entertainment.

While some of those were first-time participants in the fundraiser, others have made it an annual tradition over the past 16 years.

"It was pretty much all locals, which was really cool because it's really found its spot here locally as far as the fundraising community goes," said Clark. "It's really neat to see how this fits in with the locals, and the support they all get, whether it's from their workplaces or their families or their friends. It's such an incredibly generous community we live in and this is just another awesome example of that."

The wider Whistler community has similarly embraced the event, whether or not they participate in the act itself, Clark added.

"Nobody ever likes to see anybody get cancer and we all want to do things that we can to eradicate it, but there's something very genuinely 'Whistler' about it," he said. "We are very caring and giving people, and some of us can give five cents away and some of us can give $500 away and that doesn't really matter at this event. It's more about the coming together of people for something awesome, and the storytelling that sort of goes on with the event.

"The vibe that's in there; people that go into the GLC that don't even know it's going on and they leave there just so jazzed about the good that happens in the world ... People really want to be part of that."

That comes from not only the generosity of the community, but the groundwork of the shavees themselves to gather those funds, Clark added.

"They work their tails off to raise the amount of money that they raise," he said. "At the end of the day, it doesn't matter whether it's $200 or $2,000 that you raise, it all goes to such a great cause and it's money that wasn't there before."