Keeping on top of contamination a continuing battle
Jun 3, 2015 6:00 PM By: Alison Taylor 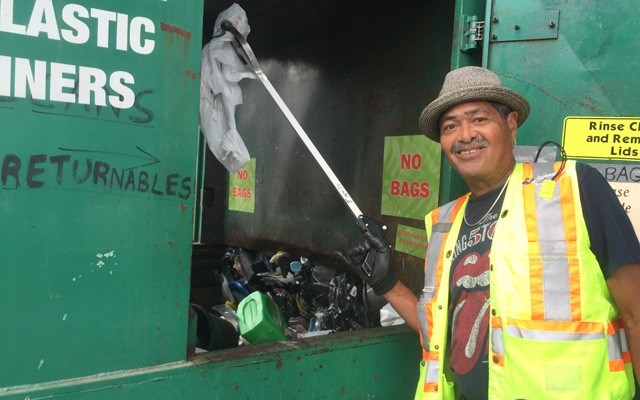 Keeping it clean Rheo Lefebvre pulls yet another plastic bag out of the rigid plastic container in an effort to keep Whistler's recycling stream clean. Photo by Alison Taylor

Without even looking Rheo Lefebvre can tell there's a problem in the large "rigid plastic" container at Nesters.

"There's glass in there," he said, just as someone empties their plastic recycling into the bin with a familiar clink.

The glass bottle comes out, along with a friendly complaint: recycling is too confusing these days.

Lefebvre pulls out a plastic bag from the rigid plastic mix too; plastic bags are chronically discarded in the wrong place. The trick is keeping the recycling stream clean, no more than three per cent contamination.

Whether it's too confusing or too onerous or people are too rushed, he said the problem is staring people in the face.

"The biggest mistake," said Lefebvre, "is people not reading the signs."

It's been one year since the signs came into effect ushering in a new era of recycling in Whistler with a new EPR (Extended Producer Responsibility) recycling program, where producers of plastic, tin, glass, Styrofoam, paper, cardboard, are held responsible for their product across its whole life cycle. Whistler is one of 77 towns in B.C. to join the program, managed by the non-profit Multi-Material BC (MMBC) and regulated by the provincial Ministry of Environment. It's an $85 million program — those fees collected from approximately 1,000 members.

"We're quite happy with how the depots in Whistler are performing," said Allen Langdon, managing director of MMBC. "They're probably two of the busiest depots in the province. From our perspective the Whistler system is working quite well in that we're getting quite a bit of material."

Prior to joining MMBC, the municipality paid $125,000 to have recyclables collected and removed. This first year Whistler has been paid about $83,000 for the recyclables it's collected.

In addition, with the onus now on businesses to get their commercial waste to the Callaghan Transfer Station, Whistler has removed roughly 380 metric tonnes of commercial waste from its depots. That's 21 per cent less garbage going to the transfer station in municipal trucks and $45,000 in savings.

"Certainly we're on the right side of the ledger with this," said Mayor Nancy Wilhelm-Morden, despite the added costs of having attendants on site during the depot hours.

More details will be available in the annual report, due out July 1.

"Part of our annual report will detail not only how much we're recycling but where are we sending that material, what is the end market for the material that we have recycled," explained Langdon.

"It's having a better line of sight into how this material is managed at the front end so that we can ensure that it's recycled responsibly at the back end."

The program was not welcomed by all when it began in May 2014 with some businesses balking at the added cost to doing business, and some municipalities worried about the financial impacts as well.

Late last year the NDP called for an audit of the program arguing the stewardship agency is unaccountable and creating chaos among existing recyclers.