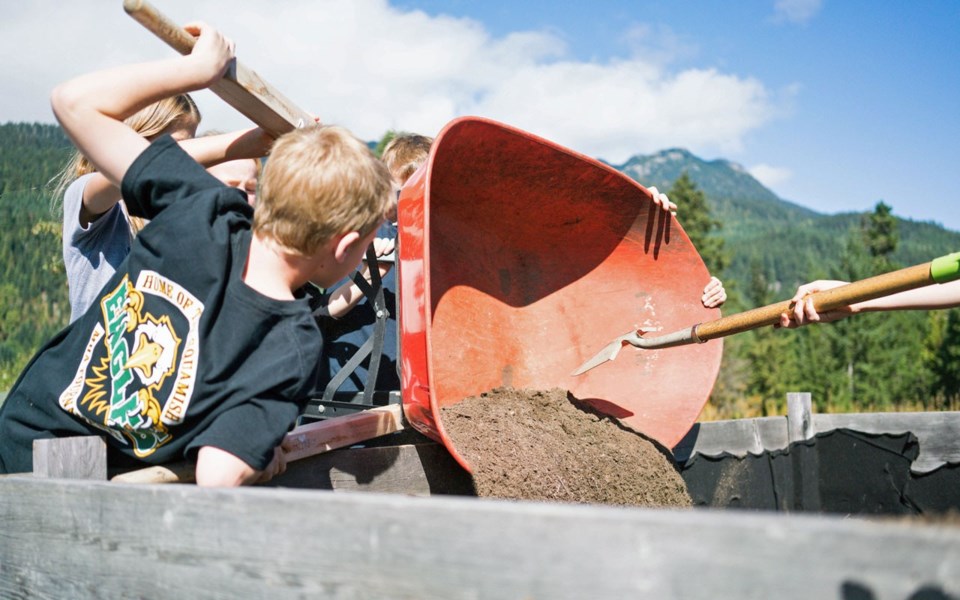 there is a pair of gardening quotes that Cheakamus resident Olwen Kuiper always falls back on, both more relevant today than they may have been last year.

One, by Geoff Lawton, posits that, "all the world's problems can be solved in a garden."

The other, attributed to Audrey Hepburn, says, "to plant a garden is to believe in tomorrow."

One of more than 200 Whistlerites involved in the GROW Whistler Community Greenhouse and Garden program run by the Association of Whistler Area Residents for the Environment (AWARE), Kuiper sees the value in a well-tended plot of land.

"I think for me, there's just this sense of connection—to other people and also to the Earth," she said.

"I think for a lot of people it's a little bit of a church, you know? You just get away from things."

Though COVID-19 delayed the official opening of AWARE's community gardens—located at Spruce Grove, Creekside, Myrtle Philip Community School and in Cheakamus—green thumbs across the valley will be able to sow their seeds starting this week.

After two months of quarantine, the start date is anxiously anticipated.

"Right now we're really missing it, because people are tied up with each other all day," Kuiper said.

"It's going to be so welcome just to get everybody out and about."

Kuiper said she got involved with the program after moving to Cheakamus in 2015, initially focusing more on the landscaping and horticultural aspects before getting interested in growing vegetables.

In 2017, she helped put in the Cheakamus garden's pollinator hedgerow, which attracts pollinators to the garden to help activate vegetables and produce.

"That hedgerow last summer was in full bloom, and the bees and all the pollinators were really active," Kuiper said. "It's very colourful, very vibrant, and just really brings people into the garden."

The community garden program boasts just under 200 garden boxes at its four locations, used by everyone from seniors and singles to school groups and families, said AWARE's executive director Claire Ruddy.

"They are about giving people the ability to grow food, but they're also about cultivating health and building community, and I think that the recognition from the province that community gardens are listed in the essential service list ... recognizes that," she said.

"It recognizes that they play an important role in food security, but also, while people are staying physically distant but hopefully still socially connected, [community gardens] have an important role to play in terms of mental health and spending some time outdoors."

The program boasts obvious environmental benefits, "because it's all about growing your own organic, non-GMO food," Ruddy added.

"But it also means that that food doesn't have packaging on it, it's reduced food miles, and so it's a great kind of multi-layered project."

At the Spruce Grove site, Matt Radymski has been honing his craft for nine years, deploying a kind of trial-and-error process in that span to build one of the program's most bountiful boxes.

"I'm not an educated horticulturist or anything like that; it's basically season by season," he said, adding that every summer is different.

"So even the best laid plans—like, 'oh, well this worked last year, it will work this year'—can change."

Visiting the garden is an almost-daily event, Radymski added, with watering, weeding and thinning taking place as necessary.

"You put in a ton of seeds and you just take the strongest ones to start, and then thin out the rest so that the strong ones have space to grow," he explained.

"So [I'm there] almost daily, and I can keep an eye on how changes are going through ... usually I'll grab a handful of something for lunch, and then maybe later in the evening I'll take the cruiser bike and a basket out front and pick a bunch of greens for a salad or something to sort of dress up a meal."

While there are certain things that gardeners are asked not to plant—berries, fruits, corn or anything that will attract bears or wildlife, for example—the sites tend to wind up with a good variety each year.

Radymski said he finds that things like green beans, Swiss chard and kale (for a point in the summer) grow best, and lettuce tends to do well in June and early July.

As for yield, it can be hard to measure out an average, "because quite often I'll just be in there and it will almost be a smorgasbord" of taste testing, Radymski said.

"Throughout the summer you'll get waves of like, everything is growing at once and you've got an abundance and you're giving it away to friends, and then other times it starts to lean out quite a bit."

A plant is much like an iceberg, he reasons—what's visible above the surface is far from the whole picture.

"If the roots are unimpeded to grow, then you're going to get more growth from your vegetables, so then more yield," he said.

"Going the extra mile and getting elbows deep rather than just to the wrist. It's well worth it."

Both Radymski and Kuiper touted the social benefits of the program as well.

"You see all different aspects, and we have a real cross section of people—seniors and school groups that have boxes, people that are challenged, and lots of single moms," Kuiper said.

"So it's a huge social scene."

There are still a handful of garden boxes up for grabs for the 2020 season—boxes cost $75 for the season, plus an additional maintenance fee if you choose not to volunteer to keep the space maintained.

Head to awarewhistler.org for more information.