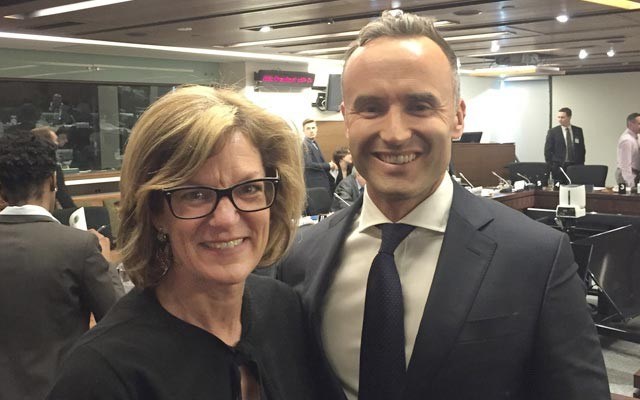 With summer just around the corner, last year's labour struggles are no doubt top of mind for many Whistler businesses.

"People are struggling to fill all the positions, and I think there is just a general anxiety about the summer."

The timing, then, couldn't be better for Litwin to travel to Ottawa to address a House of Commons standing committee in regards to the Temporary Foreign Worker Program (TFWP).

Litwin — endorsed on the trip by Whistler Chamber members, the RMOW and the BC Chamber of Commerce — spoke to the committee on May 16, and presented much of the work done and data collected by the Chamber and its partners in recent years.

"We really wanted to start with a very positive message and make sure they knew that we're a town that wants to help itself," Litwin said.

Litwin's presentation touched on Whistler's extensive recruitment efforts, the work of the Whistler Housing Authority, the partnership with the University of Victoria's Gustavson School of Business, increased wages and more before getting into some of the hard data.

"(I noted) that Whistler drives 25 per cent of the tourism export dollar for the province, that we're sending over half-a-billion dollars a year in tax revenue to the three levels of government, and yet still — despite all of this and all the great efforts and lengths we've gone to — Whistler sits at 1.8 per cent unemployment," Litwin said.

"(I also) just really reinforced that tourism is a growing and green industry in Canada, and it's not like all sectors of the economy are absolutely cranking on all systems right now, so let's support tourism," Litwin said.

"There are reputable businesses across Canada — and Whistler is full of them — that have tried to hire Canadians but can't find them."

The message was well received, and some committee members were surprised at the data, Litwin said.

"I think they were quite stunned, and they just said, 'how is it possible that you're doing all these things and you're still at 1.8-per-cent unemployment?'" he said.

"And I said, 'well, this is why we're here. We are perplexed, and based on the recommendations these are some of the things we think would help.'"

Pamela Goldsmith-Jones, MP for West Vancouver-Sunshine Coast-Sea to Sky Country, played a big role in ensuring Whistler had a seat at the table.

"(Whistler) is definitely a micro-labour market that's highly specialized, and it has done an excellent job of recruiting, training and retaining Canadian and indigenous staff — that's what everybody wants first," Goldsmith-Jones said.

"I do not think that their situation will be ignored."

But as the conversation continues, it's important that the rights and safety of workers remains at the forefront, she added.

"Val was a strong advocate for that," she said.

"Everybody is very concerned about abuses that would happen under the system, and we're all a part of maintaining its integrity and oversight.

"This is not about taking advantage of people, that's for sure."

Litwin wanted to thank Goldsmith-Jones, saying the representation Whistler received wouldn't have happened without her.

"She has been such a strong advocate for our community, and such a cheerleader for Whistler as a resort, and I just know that we got a seat at that table because Pam was working in our interests as well," he said.

Changes to the TFWP were introduced in June 2014 by Canada's previous Conservative government. The Liberals announced a review of the changes in February of this year, after forming government in October 2015.

The committee will hear from several witnesses representing various industries, labour advocacy groups and levels of government before producing a report.