Whistler's council off to rocky start 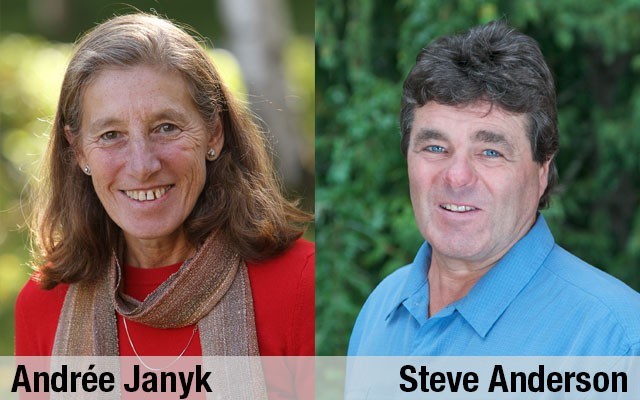 Just hours after the polls had closed Nov.15, two Whistler councillors engaged in a heated exchange allegedly over events earlier in the day.

The event is notable in that it marked a departure from the previous council's relationships, which were publicly viewed as harmonious.

Words were exchanged by newly-elected Steve Anderson and incumbent Andrée Janyk just outside the Cinnamon Bear bar in the Hilton at a post-election party.

While Anderson was campaigning earlier in the day alongside fellow candidate Michael d'Artois at the corner of Lorimer and Nesters Road, Janyk arrived by car with candidates Sue Maxwell and Pete Crutchfield close behind.

Anderson claims Janyk exited the vehicle and "freaked out" because his sign was stuck to the hydro box on the corner of the road rather than being handheld, and was displayed without a permit.

"It was really quite bizarre," said Anderson of the alleged confrontation.

However, a pair of witnesses at the scene said they never observed any kind of altercation between the two, and that Janyk left soon after arriving.

Shortly after Janyk and the other candidates left, a municipal bylaw officer arrived to question Anderson and d'Artois on their use of signs. Assuming it was Janyk who reported him to Bylaw Services, Anderson said he asked the officer if it was a woman who called it in. The officer allegedly said yes, something he would not be permitted to reveal.

When asked if she called bylaw, Janyk said: "No, I didn't. But that's irrelevant. The fact is (Anderson) was doing something against the bylaw."

Elections BC permits candidates to "place election signs and posters" on Voting Day, as long as it is not within 100 metres of the polling station. d'Artois showed this regulation to the bylaw officer, who left without issuing a ticket. Whistler's chief election officer confirmed the regulation with Pique.

Later that night at the post-election party, Anderson, who claims he never told anyone about his assumption that Janyk reported him to Bylaw Services, said he was "accosted" by the incumbent.

"Last evening I was accosted... in the Cinnamon Bear of being a bully and all this other stuff," he said.

In response, Janyk said it was actually Anderson who initiated the argument.

"I went to shake his hand, and he falsely accused me of calling bylaw, and I said I did not," she said. "He continued to accuse me, I said I did not, and that is where the argument started. I stood up for myself, that's all I did."

A visibly upset Janyk left the Cinnamon Bear shortly after the exchange.

Both Anderson and Janyk said they're ready to put the incident behind them.

"To me, it's over and done with," said Anderson, who added that he has "the utmost respect" for Janyk and her family.

"It's an election cycle, now it's done, it's over. Now it's time to get along and extend the olive branch, and I've done that a couple of times."

Said Janyk: "We need to move forward as a team. We have a lot of work to do in four years and I plan on doing that."

Re-elected Mayor Nancy Wilhelm-Morden chalked the argument up to feelings "running a bit high" in the lead-up to the election. The mayor said she's spoken privately with both councillors-elect about the incident.

"I don't want to make excuses for them, but on the other hand I don't think it's any kind of indicator of how the term is going to play out, nor is it an indicator of how we're going to work together," she said.