Public can give feedback on planning document online until July 13
Jun 27, 2018 6:00 PM By: Brandon Barrett 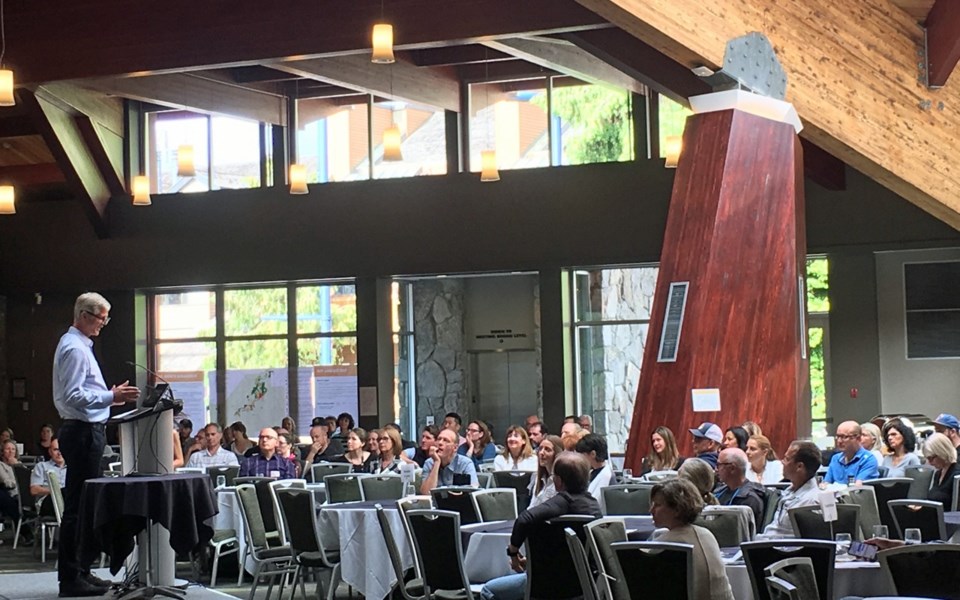 The resort got its first glimpse of the long-awaited draft update to Whistler's Official Community Plan (OCP) at a forum held on Monday, June 25 at the Whistler Conference Centre.

A municipal planning document, the OCP sets the course for development in the community, and enshrines local values inherent to Whistler that were cultivated through extensive consultation with the public, the local First Nations, and other resort stakeholders.

"This evening is really an important milestone in our progress of refreshing our community vision and updating our OCP," said Mayor Nancy Wilhelm-Morden.

The updated document contains several new chapters that reflect on the current realities of Whistler and take into account the work done by municipal committees such as the Mayor's Task Force on Resident Housing, the Transportation Advisory Group (TAG) and others.

A notable addition is the chapter on "Reconciliation with Lil'wat Nation and Squamish Nation," which commits to creating "an enduring relationship" with the Nations, to establishing collaborative processes for Crown-land planning, and to enable the Nations' participation in Whistler's economy.

To that end, the RMOW, Squamish and Lil'wat have agreed to a land swap that would see the Nations receive a parcel of municipal land in Kadenwood in exchange for a parcel in Emerald West. The OCP supports up to 332 bed units for First Nations' development of market housing in one of Whistler's priciest neighbourhoods.

"That's a bombshell, the Kadenwood lands," said longtime local, former alderman and 2005 Citizen of the Year Garry Watson upon learning of the land swap.

The exchange comes after the B.C. Supreme Court quashed Whistler's planned update to the OCP in 2012 when the provincial government was found to not have adequately consulted the local First Nations throughout the process. (Neither Squamish nor Lil'wat Nation chiefs could be reached by press time.)

A running theme throughout the new draft centres on the need to balance Whistler's continued growth with its unique sense of place and natural environment. Key changes to the OCP's "Growth Management" chapter reinforce this notion, crucial in a community that has now reached 90-per-cent buildout of its approved development capacity of 61,561 bed units. Of the remaining bed units, nearly 40 per cent will be dedicated to employee housing, mostly in Cheakamus Crossing.

"Cheakamus Crossing is probably our greatest immediate opportunity, but it will take us a while ... to achieve the housing units for that site because we have to go through site servicing, building design, etc., which is going to take approval of building construction into 2020," said municipal director of planning Mike Kirkegaard. The RMOW has a target of adding up to 1,000 bed units for employee housing in the next five years.

In the "Residential Accommodation" chapter, the OCP draft added a new goal "to promote diversity in housing price ranges for differences in workforce demographics and income."

The "Natural Environment" chapter reiterates the community's commitment to protecting and restoring Whistler's surroundings, and stresses the need to integrate climate change planning, wildfire management priorities and to restrict development to the resort's least ecologically sensitive areas. It also includes a suggestion to investigate "the integration of natural capital" into the RMOW's asset management program.

On the transportation front, the relevant chapter includes several additions that mostly incorporate the prior work done by TAG. It mentions the need to increase emphasis on both local and regional transit strategies and to enhance focus on "non-highway" transportation connections in the community.

A key addition to the "Health & Wellness" chapter places more emphasis on promoting and supporting strong mental health in local medical and social-service systems with efforts aimed at youth.

Jackie Dickinson, the new executive director of the Whistler Community Services Society (WCSS), spoke about the importance of addressing the social well-being of the resort.

"If we can't take care of our people, then we all lose in this equation, we all fail," she said. "Although we live in a wonderful, beautiful place, we are not adverse to challenges, pain and trauma."

The draft OCP is available to view at whistler.ca/myfuturewhistler. That's also where the public can give feedback on the document until July 13. The RMOW is targeting Aug. 14 for first and second readings of the plan.