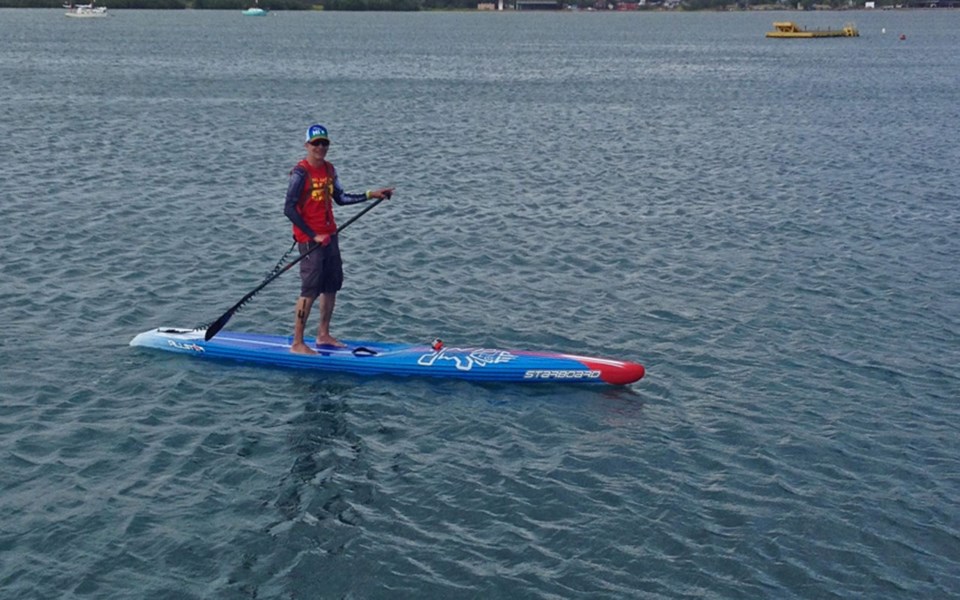 Arne Gutmann went island-to-island in the Pacific Ocean last month, heading from Maui to Molokai an annual 43-kilometre race between Honolua Bay and Kaunakakai Harbor. The kicker: it's a stand-up paddleboard race.

"I'm a long-time paddler for years, and I've just started upping my distances. A good friend of mine is a paddler with the same psychotic sort of mindset. We've just been doing longer things individually and together," he said.

He wasn't particularly pleased with his time of six hours and 25 seconds (6:00:25), which placed him 39th out of 44 entrants, calling it "a lame time." However, Gutmann left as the top Canadian and in third place in the men's 50-to-59 division in the July 14 contest. He plans to challenge the race again in order to climb the standings.

"I know now exactly where my weaknesses were and I'd like to really improve on that. I know I could knock off at least half-an-hour to 45 minutes," he said. "The distance isn't a big thing—43 (kilometres) is not really that much, to be honest. With wind against your back, you're not really paddling hard."

Gutmann explained the first 20 kms provided the stiffest challenge, as there were waves larger than what he was used to overcoming here.

"Because there are quite strong winds coming through the Pailolo Channel, that's why it's such a prominent race, but because of my inexperience with anything bigger than three to five feet (one to 1.5 metres), it was really, really tough," he said. "The first half, I fell over 20 times and the second half, I only fell over once.

"In the second half, conditions were very similar to Howe Sound, but in the first half, it was pure Hawaii ocean madness."

Gutmann's board was his typical 14-foot-by-27-inch (4.3-by-0.7-metre) ride, but he said the journey would have been smoother on a longer board with a rudder.

While the competition was more difficult, leaving from Maui and venturing onto the open ocean was the easier portion in terms of navigation, Gutmann explained, as the competitors were still fairly close. As he closed in on Molokai, it was a little easier to figure out the route while paddling roughly two kilometres from the shore.

"I really love the aspect of the journey and the challenge of something like the M2M because you have to pick your own route to get there," he said. "You don't just follow somebody because if you don't know and you can't stay with them, you'll lose them.

"I like that challenge and knowing whether you picked a good line or a bad line, and I actually picked two bad lines, but I corrected them and did OK."

While his local training couldn't entirely replicate what he faced on the open water, it was still a solid base.

"Howe Sound is pretty good and sometimes, you can get some really nice glides, but for the most part, it's not the same," he said. "It's still good practice getting you prepared for ocean craziness."

While he'll occasionally compete, Gutmann explained he enjoys paddleboarding for what it is, a chance to get outdoors and see sights he couldn't check out from land. He typically completes 60 to 110 kms a week, regularly starting from the Squamish Yacht Club in the Mamquam Blind Channel, traversing to Britannia Beach before turning around.

"I would fight the inflow, outflow, whatever, and then I would come back," he said.

One might also catch him around Whistler on either Alta Lake or Green Lake, where he'll complete between 20 and 40 km in a day.

Just days after returning, Gutmann and paddling partner Andrew Logan circumnavigated Gambier Island, a journey of over 50 km. They completed it with minimal wind, so it was "nine-and-a-half hours of straight paddling." The duo also plans to complete a fundraising paddle later in the summer for the second consecutive year. Their campaign last year supported Whistler Animals Galore and the Whistler Community Services Society Food Bank.

The videos below show Gutmann in action.