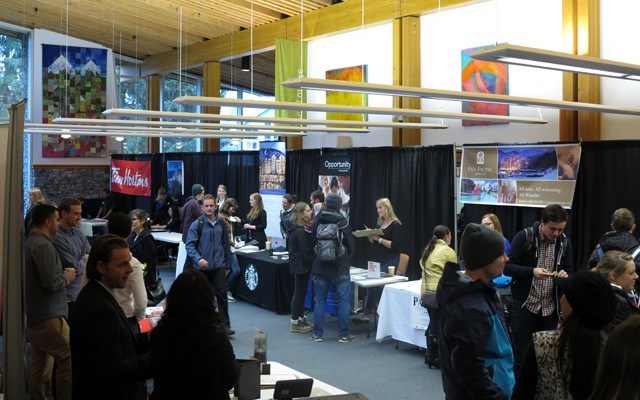 recruitment push The Whistler Job Fair, hosted by the Whistler Chamber of Commerce and WorkBC at the library in September, is pictured. Local businesses have had to rethink their recruitment strategies after a summer when frontline staff was in short supply. photo by vince shuley

With restricted access to the Temporary Foreign Worker Program (TFWP) and the lowest number of Grade 12 students in more than a decade, Whistler businesses have been hard-pressed to find staff as of late.

The shortage has led some local businesses to rethink their recruitment strategies.

"We've been watching this thing come for two years, and you compound that with the housing issue in town and it was like, 'holy smokes, there's an issue here,'" said Joel Chevalier, WB's VP of employee experience.

Reading the tea leaves around the TFWP, the mountain operator began reducing its reliance on foreign workers some time ago, Chevalier said.

This year, that number has been reduced to 58 — all of them highly skilled ski and snowboard instructors, Chevalier said.

The difference has been made up by finding people closer to home, including recruitment efforts aimed at B.C. and Canadian colleges and universities and a revamped program for local high school students.

"By committing to 10 shifts, or 100 hours, the students will gain a course credit, they will gain work experience, they'll get a full season's pass and they'll get paid.

"We just launched that about a month ago and had huge response on it, which is probably about 85 to 90 high school kids that are interested in this program."

There's also the potential for certain businesses to work together to solve staffing struggles.

Where WB is busiest in the winter — staffing up to 3,800 employees — a company like Ziptrek sees the opposite effect, with staffing numbers increasing three-fold come the summer.

"We definitely support each other with our recruitment efforts," said Ziptrek's head of human resources Katherine Tilley.

"So we make sure that our staff at the end of summer are aware of all their winter opportunities, and they do the opposite for us."

The partnership is not exactly new, Tilley said, but Ziptrek is looking at developing the relationship further.

Ziptrek held its first job fair in the spring, and for the first time in several years has acquired housing to offer its employees.

"We just wanted to get creative," Tilley said of Ziptrek's inaugural job fair. "(And) obviously with recruiting, housing is a big appeal."

But there isn't likely to be one magic cure-all solution for every Whistler business, said Moses Chew, director of human resources for the Fairmont.

"I think everyone does have a very different approach to it. I don't think there is one winning strategy," he said.

"The different industries are obviously looking for different skill sets, so you can't have a blanket approach to everything."

The Fairmont's recruiting is buoyed by its brand, as well as an international recruiting website, but some positions are still tough to fill.

"In certain professions we feel the squeeze," Chew said. "Culinary is certainly harder and harder to find, food and beverage managers, and these are trends that are not unusual for the last three or four years here in Whistler."

"Good rates for chefs in Whistler in roles requiring supervision, certification and 4-plus years of experience compare to entry level labour and starting apprenticeship wages for a carpenter," Campbell wrote in an email.

"Why stay or start in the tourism and hospitality industry where getting to the top position, after years of experience, is basically valued as much as the bottom or starting wage for your friends getting into construction?"

Campbell said restaurants need to look at who they recruit and how they retain them, including having a clear training, promotion and retention plan as well as targeting under-employed groups like people with disabilities, who tend to stay in jobs longer.

"I have a certificate in disability management and we really need to think of all the abilities people have and how can we fit them into our industry so they can thrive."

The first step is to get a better understanding of who you're trying to recruit, said Kelly Lendsay, president and CEO of the Aboriginal Human Resource Council (AHRC).

Sometimes it's not as easy as putting up a "Help Wanted" sign.

"There is a lack of knowledge amongst many managers inside companies, and it's easy to learn," Lendsay said.

"It's not hard, but because we didn't learn it in school, because there is this disconnect, many Canadians simply don't know what they don't know.

"Once you actually start to get an understanding of the Aboriginal circumstance of this country, and then you look at it in your own backyard... you start to look at the B.C. groups, you look at the different First Nations and Métis groups, and you start to put together practices and strategies."

Perhaps the biggest barrier for Aboriginals seeking jobs in Whistler is transportation, but problems like that are easily solved with a little ingenuity, Lendsay said.

"In some cases employers have worked with Aboriginal communities to create a van pool. Everyone pools in a van, they get work, they get rides, there's camaraderie, so there is some very practical solutions," Lendsay said. "Whatever problem or challenge there is, you've got to put it out there so that the employer and the Aboriginal communities, we can find solutions together."

The AHRC offers resources and strategies for employers through its website at www.aboriginalhr.ca.