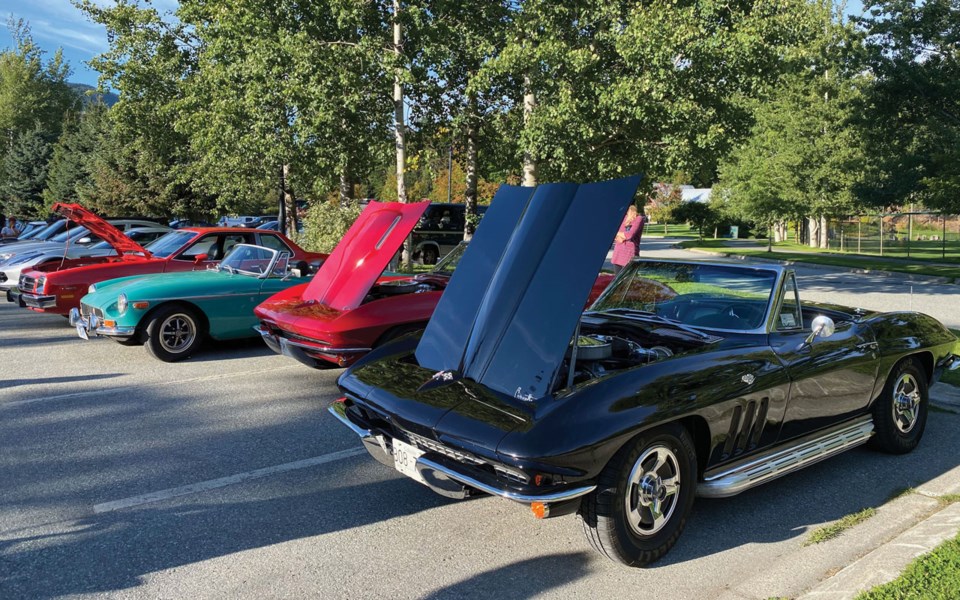 SWEET RIDES A collection of some of the cars on display at the first locals’ car show on Aug. 26. Photo by Paul Fournier

A collection of classic cars making its way up Highway 99 is quite often a group from out of town, but Paul Fournier wants Whistler to know that’s not always the case.

Fournier organized a locals’ car show for the first time last month and another is on the way on Sunday, Sept. 20.

He came up with the idea after Greg Reamsbottom started the Sea to Sky Classic Vehicles group on Facebook.

“[I thought], ‘There’s been a bunch of us talking about it. Let’s meet up and have a little show and shine,’” Fournier said. “It was kind of a milestone. Whistler’s had a lot of car events, as we all know, but they’re all from out of town. They come up for their own thing.”

The first event, which took place on Aug. 26, was a hit, Fournier said, as roughly three dozen cars, including a handful from the Howe Sound Cruisers, came up to take part.

“What impressed me was the variety. Definitely, Mustang pony cars ruled the show there,” Fournier said. “They’re an easily collectable car because they’re reasonably priced and they’re plentiful.

“But it was all over the map. There was everything from Maseratis and Porsches to ’57 Chevys to the General Lee to the Dodge Swinger. There were a couple of classic Corvettes, a newer Corvette, a Firebird.”

Fournier himself has a 1966 Stingray and a 1979 V8 Monza, noting that driving the Stingray is akin to riding in a parade with people looking and waving.

The next event is set for Sunday, Sept. 20 at Myrtle Philip Community School at 2 p.m. From there, drivers will head north to Pemberton’s Black Squirrel Restaurant before returning home.

“There’s already a lot of people that are excited, and a few people who couldn’t make the last one that’ll try to make this one,” Fournier said.

The first cruise used Spruce Grove Park as a meeting place, but with slo-pitch action also taking place at the same time, a slugger’s home run could be a smash of a different kind for a driver.

Fournier reasoned that, given that much of the event is individuals driving their own cars and then admiring others’ vehicles from a distance that it’s one of the most COVID-friendly events.

“When you’re driving your car, I don’t know how much more social distance you want,” he said with a chuckle.

Reamsbottom, meanwhile, is currently restoring a 1967 Plymouth GTX he bought three decades ago and stored in his uncle’s barn in Langley. With the car not expected to be ready to roll until next spring, he’ll bring out his Harley Davidson if the weather cooperates.

At any rate, Reamsbottom has been thrilled to see the community grow from an online group to in-person appreciation.

“It’s another way for people to connect and be social, which is what a lot of people are missing these days,” he said. “It’s a really cool way for like-minded hobbyists to get together, show off their hard work or show off their works in progress while still staying safe.

“There’s way more funky, neat cars kicking around here than I ever thought there were.”

Looking ahead, Fournier hopes to formalize the events in the years to come, envisioning three or four events in a summer, charging an entry fee in support of a local charitable cause and providing plaques for the top rides.

Though the Facebook group is branded as being for classics, Fournier said his focus is “character vehicles,” so gearheads shouldn’t be intimidated at the thought of coming out.

“If anybody thinks their car is cool and wants to show it off, bring it out,” Fournier encouraged. “It’s all about the car culture more than about saying, ‘Your car can’t be here because of this or that.’”

Keep an eye on Sea to Sky Classic Vehicles for more information.