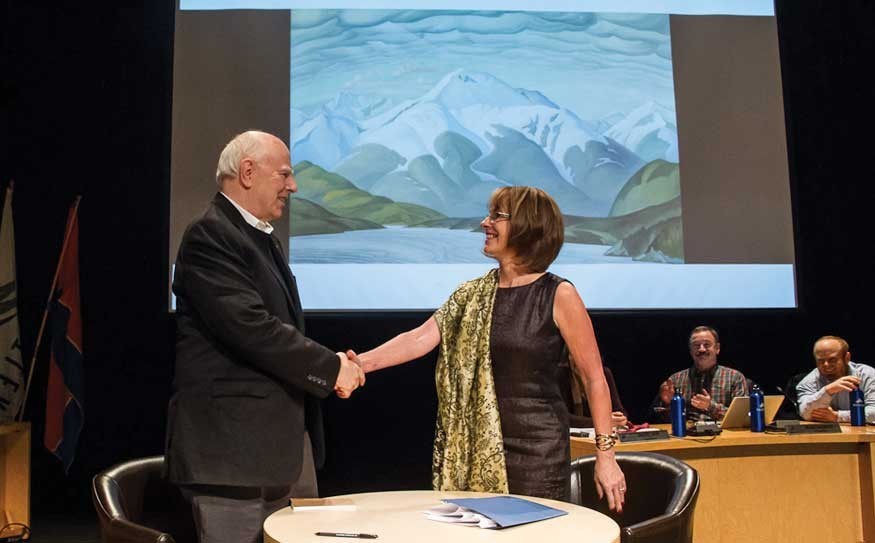 HISTORIC Michael Audain (left) shakes hands with Whistler Mayor Nancy Wilhem-Morden in December after the signing of a Memorandum of Understanding to bring Audain's collection to Whistler.

There was no fancy celebration for Mayor Nancy Wilhelm-Morden on the occasion of being awarded the Queen's Diamond Jubilee Medal.

Instead, the pin quietly arrived in the mail about two weeks ago, after an out of the blue email from the Federation of Canadian Municipalities (FCM), which nominated Whistler's mayor.

Despite the low-key arrival, Councillor Duane Jackson made sure Wilhelm-Morden's efforts were recognized at Tuesday's meeting.

"Clearly Nancy has a strong history of community service here in Whistler and continues to contribute significantly today and is an extremely well-deserving recipient of the medal. And all of us on the council certainly appreciate her experience and leadership. So congratulations Nancy," said Jackson, followed by a round of applause from the room.

The mayor said she was very honoured to receive the medal, which has been given to 60,000 Canadians to honour significant contributions and achievements. It is sitting on her dresser where she can look at it from time to time.

"My mom put it in the Church bulletin," she said with a smile, adding that family members have been calling her from across the country with their congratulations.

This week council gave first and second readings to the zoning bylaws that will allow the building to go on the municipal land between parking lots 3 and 4.

More information also came forward about the business plan. Roughly 45,000 visitors are expected through the doors of the new museum in the first year alone.

The projected number of visitors dips slightly in year two and three to 39,000 and 40,000 respectively, primarily due to a decrease in local attendance, while visitor attendance by the third year is expected to be slightly higher than the first year.

The public hearing for the 40,000 square foot facility has been set for Tuesday, March 5 at 6 p.m. at Millennium Place.

Recreation planning gets the nod

The municipality has its eye on the future of recreation in town, and it wants to tick another thing off its sizable list in the Corporate Plan.

With those two goals in mind council approved the Recreation and Leisure Master Plan process at Tuesday's meeting.

Among other things, the plan's purpose is to look at current and future needs and establish priorities for Whistler's park, trail and recreation facilities and programs over the next decade.

"It's time to take stock of where we are, what we've got and plan for the future," Martin Pardoe, manager of resort parks planning, told council.

The planning process is budgeted at $30,000, with the money to be used for advertising, community events, research, legal and document development purposes.

The bulk of the work will be done in-house and not by outside consultants.

When asked by Councillor Duane Jackson if the process would include feedback from guests and comparisons to other resorts, Pardoe said: "We are casting a fairly wide net to what is out there to open our own minds to opportunities."

Whistler to appeal to UBCM

Whistler council is writing to the Union of British Columbia Municipalities (UBCM) to request a review of a recent legal case involving conflict of interest with elected officials.

Council is concerned about the ramifications of the Schlenker vs. Torgrimson case and is requesting that UBCM "review the matter and provide recommendations to the province on behalf of all local government members to address the issues resulting from this case."

Last month the court of appeal said two elected officials in B.C. were in conflict of interest contrary to the Community Charter when they voted to grant funds to non-profit societies of which they were directors.