Jordan Sturdy met with Whistler council last week to discuss a wide variety of subjects
Jun 21, 2019 12:00 AM By: Brandon Barrett 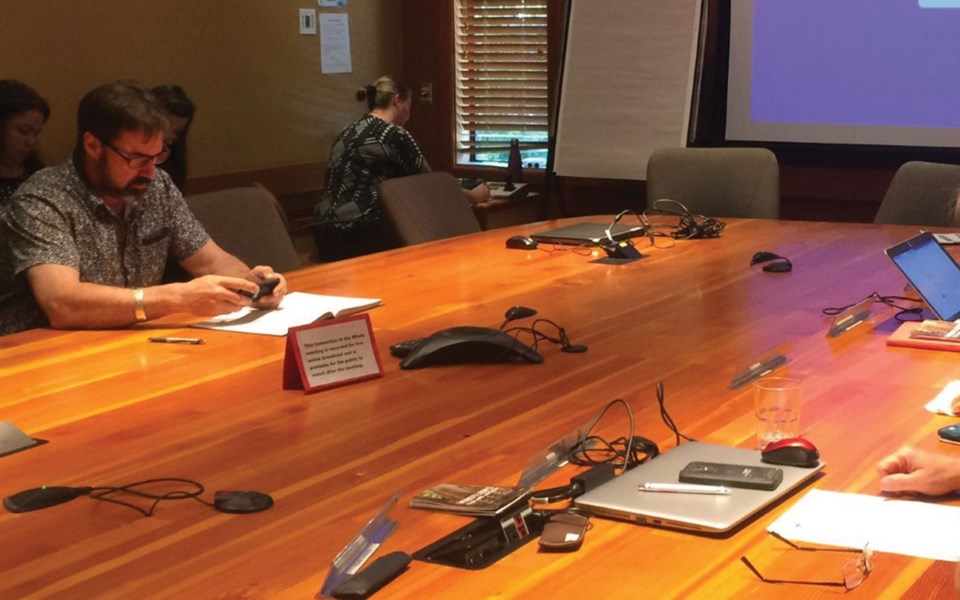 Last week, West Vancouver-Sea to Sky provincial MLA Jordan Sturdy sat down with Whistler's mayor and council to discuss a wide variety of topics relevant to the resort and wider B.C.

At the Tuesday, June 11 Committee of the Whole meeting, the Liberal official touched on everything from childcare and parks management, to gas prices and the province's new Employer's Health Tax (EHT).

The following are more of the highlights from the nearly hour-long discussion—the first time Sturdy had met formally with local officials since October's municipal election.

(For Part 1 of this story, pick up a copy of last week's Pique or visit piquenewsmagazine.com.)

One of the more common concerns for many of Sturdy's constituents of late has been the disparity in fuel prices in the Sea to Sky compared to gas stations in the Lower Mainland.

"As a result of this, I looked at it and felt maybe we should put in a competition bureau submission to look at this. Is it an issue or not?" he asked.

Sturdy's office has compared gas prices at Chevron stations in Whistler, Squamish and North Vancouver on Saturdays and Wednesdays, dating back to late February.

Over the course of roughly 15 weeks, Whistler paid, on average, 16.6 cents more per litre than North Vancouver, and 10.4 cents more than Squamish—despite a 17-cent TransLink tax added on for Vancouver drivers. (That tax is expected to go up to 18.5 cents this year.)

Although Sturdy said some of the price differential could be explained by fluctuating fuel supply and demand, bringing the issue to the Competition Bureau of Canada is not off the table.

"Whether, at the end of the day, we're going to be in a place to say, 'There is collusion and let's put a submission into the competition bureau,' I think what we'll do is put (the statistics) on our website and let people look at it and see if we can collectively decide where to go with it," Sturdy said.

For those eager to see legal cannabis in Whistler, you may have some more waiting to do, at least according to Sturdy.

"I understand the (BC Liquor Distribution Branch) is having trouble managing this," he added. "We have a number of (retail) applications in the corridor that have been completed and have been waiting for approval since last October with no additional information required and no processing of the application. I have a feeling it has to do with inadequate supply."

While understanding the desire for what could amount to a lucrative revenue stream for local governments, Study warned that it remains to be seen what associated costs will be downloaded onto municipalities in the new legal cannabis landscape.

"I am a little bit curious as to what the additional obligation on the behalf of the community is. How does the municipal cost increase because this product is legalized?" he asked.

The EHT has drawn criticism from B.C.'s small business sector since before it came into effect on Jan. 1—something Sturdy has heard from both the Whistler Chamber of Commerce and the Restaurant Association of Whistler.

"The Employer's Health Tax is certainly something that Whistler has had to deal with. It's an impact for all municipalities and businesses," Sturdy said.

Small business owners in particular say the EHT is having unintended consequences on their bottom line and unfairly hampers growth.

Speaking to Pique in April, Whistler's Priyanka Lewis, co-owner of Brickworks, Three Below and Main Street Noodles, said the government treats each separate incorporated business she operates as one parent company, which she believes unfairly inflates her payroll amount in an industry with razor-thin margins. It also doesn't account for the constant churn of Whistler's workforce as well as the high number of seasonal employees who are ineligible for extended medical coverage.

"A lot of my employees are on a visa and come here with travel insurance for one year. We're getting them on the tail end of their visas, so we're getting them for six months, and they wouldn't be eligible to get MSP," she said at the time. "But they are still included in my payroll number and there is no distinction between eligibility and non-eligibility."