Renovations make Whistler Skate Park the second largest in Canada
May 28, 2016 6:40 AM By: Brandon Barrett 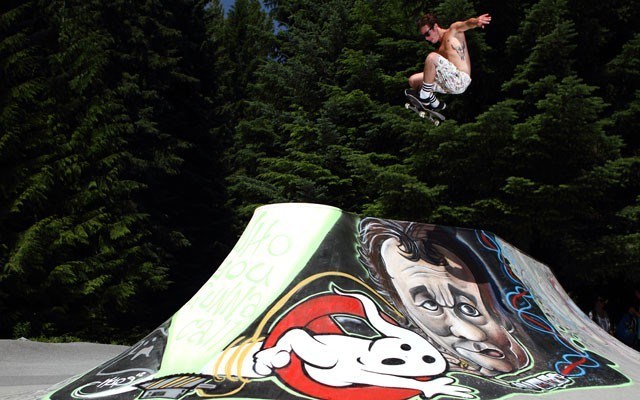 The resort’s skate community is ready to drop in after the latest addition to the Whistler Skate Park was completed and opened to the public last week.

The renovation incorporates “flowy lines and street-style elements” that put the focus on “long lines and multiple ledges for hitting, allowing skaters to pump and flow for speed,” according to an RMOW release. The expansion brings the skate park to over 50,000 square feet in size, making it the second largest skate park in Canada.

“Whistler’s Skate Park has a reputation as being one of the best in British Columbia, and the rejuvenation brings the park in line with recent evolutions in the sport,” said Whistler Mayor Nancy Wilhelm-Morden in a release on Thursday. “The Whistler skate community and visiting skaters have been eagerly awaiting these features to continue progressing skating within the resort community.”

Park upgrades have been underway since 2014 and came about following extensive consultation with the local skate community. The design and building was undertaken by award-winning Spectrum Skateparks Ltd., the North Vancouver firm responsible for 160 projects across North America, Europe and Asia.

This is the third phase of construction at the park. Other work completed in the last week includes the replacing and expanding of asphalt around the park’s snake bowl, and lifting the tree canopy to improve sightlines, safety and air flow (which helps the park dry faster during wet periods).

The RMOW said the expansion will boost the park’s chances at hosting large skateboard events in the future along the lines of the Slam City Jam, the North American skateboarding championships that were historically held in Vancouver until the mid-‘00s.

“The project is part of the municipality’s ongoing program to invest in high quality and exciting infrastructure and programming for our visitors and community,” added Wilhelm-Morden.

The project comes thanks to $807,000 in RMI funding on top of a $100,000 donation from the Whistler Blackcomb Foundation. The Whistler Skate Park’s official grand opening ceremony is slated for June 7. More details on the event will be released in the coming weeks.