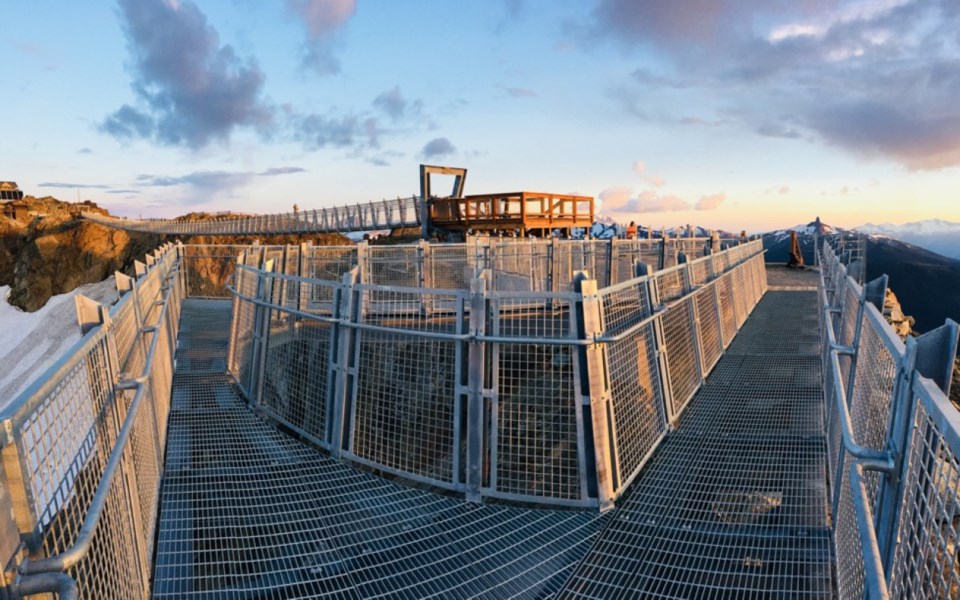 Many Whistlerites have become accustomed to a new sight this summer—a 130-metre suspension bridge that connects Whistler Peak to the West Ridge.

The bridge, which Whistler Blackcomb is calling the Cloudraker Sky Bridge, was opened at the start of July. But until last weekend, the second phase of the project—a spectacular lookout situated at the top of the West Ridge—has remained under construction.

"Since we opened on Sunday (Aug. 5), it's been pretty full-on crowds," said project lead Wendy Robinson, a business development manager with Whistler Blackcomb.

"There's a lot of people spending much more time on the peak, and spreading out to the view points surrounding the area."

The triangular platform, known as the Raven's Eye Cliff Walk, was built using four 12.5-metre cantilever beams that protrude out of the West Ridge.

The lookout offers an impressive view, looking across that valley at Rainbow Mountain and Alta Lake. It also has a little bounce when you walk on it.

The beams, which weigh around 2,300 kilograms, were placed using a Kaman K-Max helicopter, a workhorse aircraft designed specifically for lifting.

The plan going forward is to keep the suspension bridge and viewing platform open throughout the winter, said Robinson.

A dedicated team will be tasked with clearing it of snow, and the attractions will be open to skiers and boarders to check out this winter.

The floor of the bridge was built using 101 steel modules, so, should Whistler Blackcomb need to, they can disassemble it mid-winter. "It was installed piece by piece in modules. So we do have the ability to remove it, if we feel that we can't manage the snow levels," said Robinson.

The Raven's Eye Cliff Walk and Cloudraker Sky Bridge were built and designed by Axis Mountain Technical, which won the contract after responding to a request for proposals put out by Whistler Blackcomb.

"Axis' design really stuck with us. It was a really cool design. It really matched well with the bridge, design and location," said Robinson.

The bridge and viewing platform are seen as a way to broaden the appeal of Whistler Blackcomb.

"You don't have to be kind of a big-mountain skier or mountaineer to go up there now," explained Whistler Blackcomb communications manager Marc Riddell.

"What we really found is these attractions (make) the mountain a heck of a lot more accessible."

A suspension bridge was one of the projects called for in the Renaissance plan, a $345-million development plan that was adopted by Whistler Blackcomb's previous owners.

When asked by Pique if the resort is considering going forward with other elements of the plan—which include a high-end boutique hotel and a waterpark—Riddell said Whistler Blackcomb is focusing on the "on-mountain" elements.

"I think we've been on record saying that we're focused on the on-mountain experience now, which is something that was coming later (down the line) in the Renaissance (plan). So while we're still interested in some of the tenets of (the Renaissance plan), for us right now, we're really interested in the on-mountain experience," he said, citing the resort's $66-million lift investment currently underway.

The bridge is open to anyone with a valid lift pass until Sept. 16, and will then reopen for the winter season.