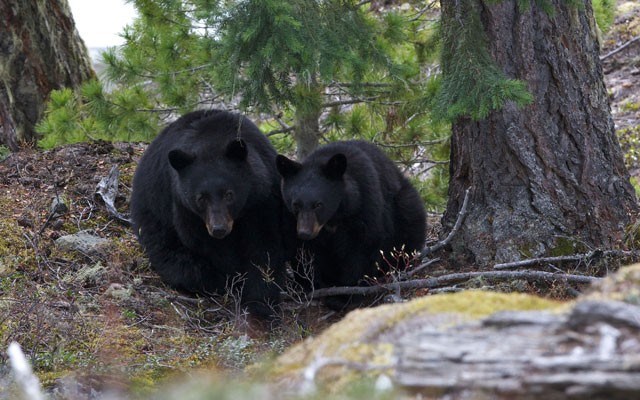 Tough Mother Whistler's oldest, and longest-studied female black bear, Marisa, left, emerged into her 23rd year with a 15-month old son. She has raised seven litters and 10 cubs in all. Photo BY Michael Allen

Whistler's oldest mother black bear squints against spring's glare — shocking at first but smelling ever so sweet. She thrusts her snout into a narrow tunnel of melting wet snow.

Nostrils flood with fresh, crisp forest air. Immediately, she detects urine from a pine marten and traces of recent bobcat activity... perhaps passing over the den while hunting snowshoe hare. She collapses her head and neck, cradling the soft doorway to her winter den. No immediate threats... just five more minutes... and closes her eyes.

Stirring and squirming alongside her 81 kilograms, a body one third her size, jolts her back into mother mode. Her 15-month-old son eagerly pushes its snout up alongside hers.

Both bears take big breathes of the world they have been absent from for nearly seven months. It's the second-to-last day of April as mom and yearling pull themselves from their winter lair into sunshine.

Jagged fingers of root mass beckon them back, as long strands of guard hair and soft clumps of under-fur remain snagged as the only physical evidence of their occupancy.

Rising on the forest's snowpack, the mother slumps back on her haunches, muscle tremors radiate through her body like aftershocks from this erupting force she's experienced annually for over two decades. Pain concentrates in her right shoulder, knotted with tension. The remedy is a reflex now — forelegs pushing into snow and snout skyward, stretching out the neck, shoulders and waking the power of her forelegs to force out the stiffness. Beneath the soft spring snowpack, her right leg buckles but, she rights herself.

Suddenly teeth grab her left rump. Her son, in a much more lively state than she, tugs and pushes up against her, his energy stimulated by the vast expanse of cold air — he wants to play. The old, stiff mother pivots and swipes at her son knocking him into a pocket of hemlock seedlings... she's got a few mom moves left.

Black bear mother and son sit on the slippery snow surface creased with mosses and lichens beneath the old growth mountain hemlock forest and glance out into the green valley of the one of the world's largest ski resorts. Nose and ears filter through this ever-changing world that they struggle to live in. They bed down that night 200 metres down-slope from the den, in a tree well partially surrounded by younger dense mountain hemlocks.

Pain revisits her right shoulder. She sighs, stretching out forelegs again and rests her head on the edge of the form-fitting daybed. Eyes close behind a graying face. Does the pain make her remember? In 2004 she limped, completely non-weight bearing, for nearly 40 days as a result of a likely fracture in her right foreleg. Luckily it was October, not spring, and younger then, she slid into her den where the days of winter's immobility repaired the fracture. She emerged in the spring of 2005 with a crooked right foreleg but, weight-bearing. She now has a sway and limp to her gait that comes and goes.

She went on to produce three more litters of cubs for a total of seven litters and 10 cubs. She has lost only two cubs to male bear aggression.

Her son sleeps heavily snuggled tightly against her. The old, mother bear seems satisfied with his weight against her worn frame. He's solid and heavier than most yearlings. Being male of a single cub litter, he grew fast and large, receiving all the attention, milk, and good berries. On the third day from the den, the bear family begins the downward trek to promising new green-up along the lower ski slopes. There they will rest most of the day with short bouts of grazing to energize their bodies.

This mother is Marisa, the oldest, longest-studied female black bear (for me), and I dare say, toughest mother in Whistler.

Despite the few hot days we've had, green-up is slow on lower mountain slopes. This means bears will be concentrated in the valley for another few weeks.

Bears are looking for dandelions and clover now, so they will graze small patches near driveways, backyards and along residential roadways and trails. Keep the area around your house clean and be aware of your surroundings.

Residents should watch for a double-tagged (Nos. 2612/13) black mother with two black yearlings near the Zen lands — she may move into residential areas — and a large, healthy (untagged) black male in Nordic. Also, male bears are using the forest cover between the Chateau Whistler Golf Course and Lost Lake for bedding.

Immature bears are often misrepresented in counts because they are small, skittish, and hide to avoid older bears. I saw my first mother with one cub-of-this-year on Mother's Day beneath the Peak 2 Peak Gondola coming down from her den. I'm expecting 10 more females from ski area that could have cubs.