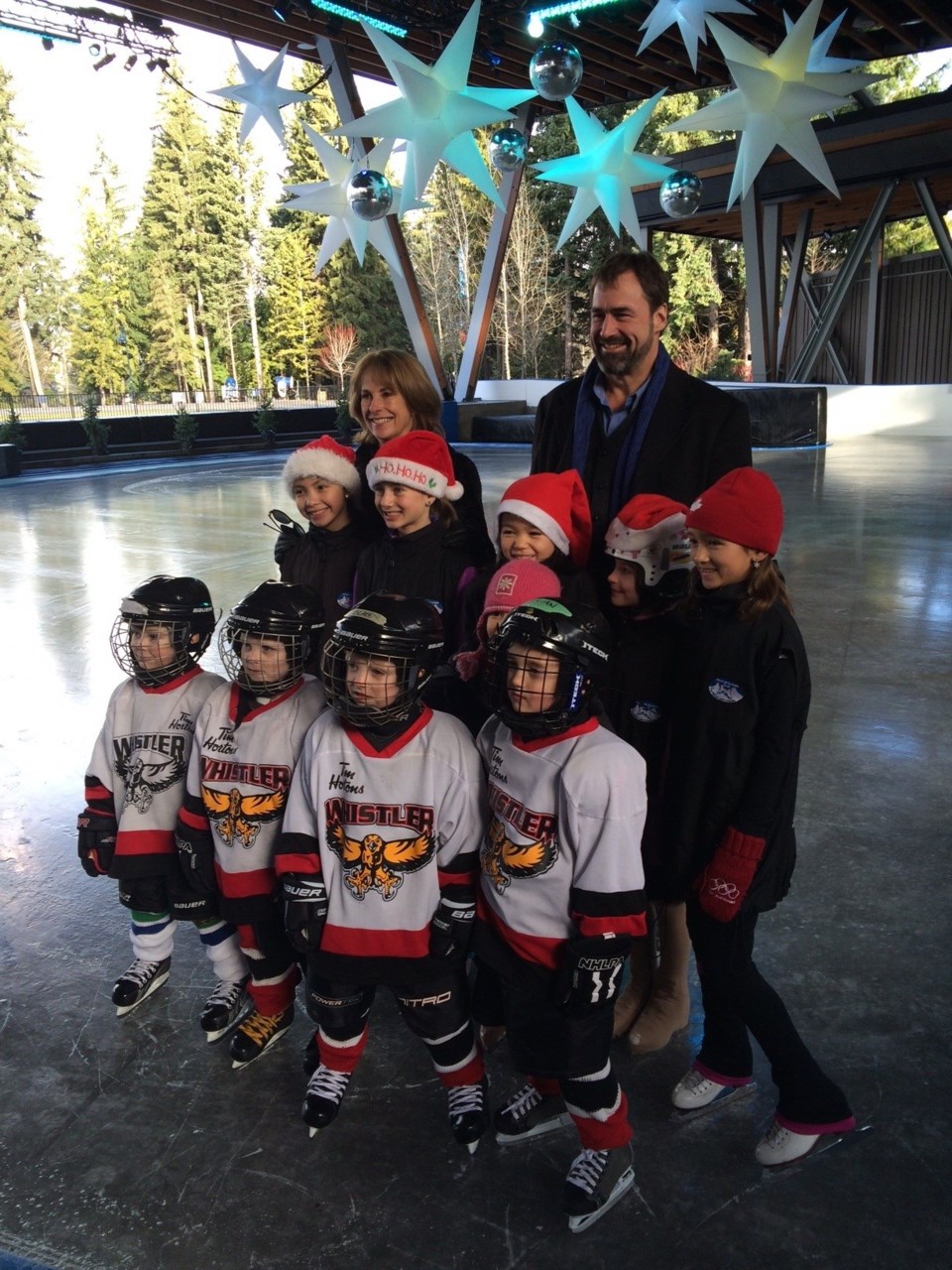 By 10:45 a.m. today there was already a line up for the opening of the outdoor ice rink at Whistler's Olympic Plaza.

"I read about it the paper so I thought I would bring my kids along to try skating - my husband's skiing," said Shirley Monteroy up from Seattle for a few days of vacation.

"It's a really great idea to have it outside. It's so, well, Canadian," she added with a laugh.

Monteroy is not alone in her enjoyment of the rink. Last year 24,000 people rented skates at the rink, and it's likely hundreds more brought there own to enjoy the ice surface - that's up from 16,000 the year before.

Whistler Mayor Nancy Wilhelm-Morden admits the numbers are a surprise.

"I have to say I was a little bit skeptical about this ice rink when the idea was first floated," she said after officially opening the rink at Whistler Olympic Plaza along with West Vancouver-Sea to Sky MLA Jordan Sturdy.

"But it has just been such a hit for the community and the guests. So many people come here and they have never skated before, and then they get the opportunity to skate outside in this beautiful venue - it is just over-the-top marvellous really. And the numbers are just remarkable."

The facility was funded with $1.4 million in provincial Resort Municipality Initiative (RMI) funding when proposed in 2011 - at that time the ice surface was temporary. The permanent facilities were put in place in 2012. This year the attraction will use, $127,922 in RMI funding to operate until early April.

Earlier this year the province said it was taking a second look at the RMI funds and their use by the 14 members of the Resort Collaborative - a group of resorts that receive targeted money to grow tourism from the province based on hotel receipts.

Sturdy, who toured some of the facilities to receive RMI funding, was measured as he commented on the RMI and its importance to Whistler, though freely admitted that the use of the funds for capital items such as the ice-rink are exactly what the province is looking for.

"Certainly I recognize the value that (RMI) has to this community, and what it has done over the years and what it does on an annual basis," he said.

"Probably going forward there is going to be an increase focus on capital projects, like upgrades to the Rainbow Theatre, trails, connections, wayfinding - all the things that Whistler does so well an on-going basis in the RMI planning.

"Operationally it will be perhaps more challenging going forward, though I can't speak to that specifically."

The province is looking at the benchmark system said Sturdy, and that may be an area where changes are introduced.

Sturdy recognized the great value of the rink to the resort and the guests that visit as well.

"I think it is a great addition in terms of it being a low cost, low barrier, easy-access facility. This kind of thing is really needed, I think, here in Whistler and it is really attractive. The numbers it has attracted in past years are really tremendous."

The 14 Resort Collaborative communities received $10.5 million in RMI from the province this year. Whistler received the lion's share of that funding, $$7,749,244, which is based on tax collected through hotels.

Resorts use the funding for a variety of different things.

Sun Peaks, for example, expanded its summer offerings with free concerts and has been growing that plan over the last three years with the roughly $300,000 in RMI funding it received. This year saw five weekends of free, outdoor music weekends in a range of genres from children's programming to Juno Award winners. Some concerts have drawn crowds of 5,000 to 7,000 spectators, and resort occupancy in the core hotel rooms has soared to 97 per cent on some of those weekends.

Whistler signed a Memorandum of Understanding with the province for RMI funding stretching until 2016 - though there are changes expected in the program as first revealed to Pique by Shirley Bond, minister of Jobs, Tourism and Skills Training last April.

The Resort Municipality of Whistler's Economic Partnership Initiative Report, produced in part as a way of quantifying the value of the RMI funds to the resort and the important of Whistler as a economic engine of tourism found that:

¥ Whistler represents 22.5 per cent of the tourism export revenue of the province.

"(The RMI funding) is a critical piece of funding for us, and I think the province understands just how important it is," said Wilhelm-Morden.

"We have done all of our research into the economic engine that Whistler is, and to a significant extent the receipt of the RMI monies and our investment in tourism infrastructure and programming gives that economic engine some fodder. So it is critical for us."

Wilhelm-Morden said she expects to hear from Bond's ministry soon on the RMI funds.

"Hopefully we will hear something soon. Minister Bond indicated that she wanted to get this decision made, and we are now into our budgeting process, so it is important that we hear soon."

Said Sturdy: "(Wilhelm-Morden) and council have done a great job advocating on behalf of the value of the RMI funds, and certainly it is fair to say the province well understands the value that it holds for the community and for the (Resort Collaborative) group as a whole."

¥ $272,000 toward creating new trails through the Alpine Trail Network;

¥ $77,000 provided for improvements to the Whistler Conference Centre;

¥ $55,000 toward Cornucopia, Whistler's celebration of wine and food.

This funding is part of the more than $60M Whistler has received since the RMI program began in 2007 - a total of over $87.6 million has been allotted to all the Resort Collaborative communities.